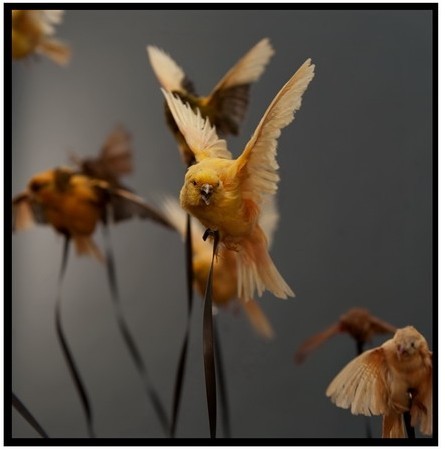 Psychopomps is Polly Morgan's first solo exhibition with Haunch of Venison. It consists of four suspended taxidermy sculptures, each poised between metamorphosis and flight. Named Psychopomps after the mythical creatures that conduct souls into the after-life, their historical representation includes Hermes and Charon from Greek mythology, the Valkyries from Norse myth, Anubis the jackal-headed Egyptian God, and in various cultures, horses, bees, birds and shamans.

In Morgan’s vision, they are represented as a fabulous troupe made up of flying machine, a bright red cardinal held in a human ribcage carried by balloons, and two winged cornucopias. The flying machine offers a fantastical inversion of the life of a caged bird. Rather than imprisoned, these flame-coloured finches fly above their cage, carrying it off as if to another world. Alternatively, the cardinal is cradled in the heart of the bare white ribcage suggesting a flickering role-play of protector and protected. The two remaining Psychopomps are abstracted composites, one made from the wings of a crow and the other from those of a pigeon. Planted one on top of the other, each successive wing unfurls to display, as if this were a flick book or an Eadweard Muybridge photo series, the full range of the bird's motions in flight.

Inert but seemingly poised to journey somewhere far away Morgan’s Psychopomps are hybrids that evoke on the one hand, the metaphoric nature of these soul conductors, and on the other, the traditions of taxidermy and its attempt to reinvigorate the bodies of dead animals.

Known for presenting animals outside their natural habitats – rats in champagne glasses, chicks harnessed by balloons or bursting from the seams of coffins or the earpieces of a telephone receiver - in Psychopomps Morgan has taken this subversion a stage further. For the first time the human body has been implicated in this macabre play and in the winged works the animals’ bodies are no longer recognizable from life. These reassembled creatures are a distortion of nature, as if dredged from a dream. The abundance of wings and its nightmarish connotations add a surreal psychological dimension to these elevated spectres, which fan their plume but remain disembodied and faceless.

BIOGRAPHY
Polly Morgan was born in England in 1980 and lives and works in London. She had an unconventional upbringing, raised in the country alongside goats, llamas, hens, hamsters and every other popular domesticated animal, but only discovered taxidermy some years after coming to live in London at 18. In 2005 she studied the art under George Jamieson and has subsequently forged a personal practice founded on its technical conventions.
Solo exhibitions include The Exquisite Corpse: A Reconstruction Project, at 1 Marylebone Road, London, 2007 and Still Life After Death at Kristy Stubbs Gallery, Dallas, 2007. Work features in the Thomas Olbricht Collection, the Anita Zabludowicz Collection and the David Roberts Art Foundation. Group exhibitions include Wonderland, Assab One, Milan, 2010, The Age of the Marvellous, All Visual Arts, London, 2009, Mythologies, Haunch of Venison, London, and You Dig the Tunnel, I’ll Hide the Soil, White Cube, London, 2008.
www.haunchofvenison.com