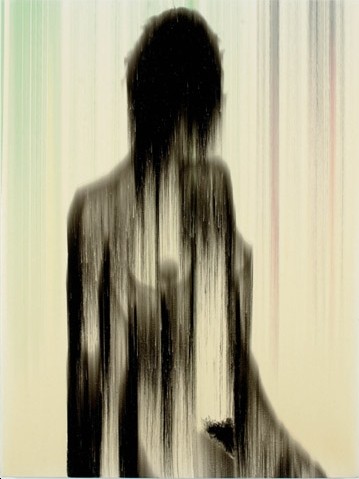 British artist Rachel Howard's first exhibition with Haunch of Venison explores the notion of a beauty that is born out of everyday tragedy. In a series of figurative and abstract paintings, and accompanying ink-on-paper studies, Howard conducts an ongoing investigation into the meaning of death, as experienced both through personal experience and through mediated representation.

The departure point for these works is the disturbing images of suicide that Howard finds by trawling newspapers and the internet, a process she calls 'prodding the inevitable'. In the resulting paintings, the artist depicts a naked human form suspended in a variety of different postures; in many cases the figures hang as though pulled by the same gravitational force that has determined the overall appearance of the painting. Small narrative-laden details such as a watchband or ladder hint at the circumstances surrounding the subject's death, but the prevailing expression is one of anonymity and stasis: the corpse perfectly preserved by the saturated colour and high gloss of the painting's surface.

An uneasy tension is deliberately sustained between this dark, often troubling subject matter and the vibrant materiality of the carefully poured paint. In his catalogue essay Brian Dillon describes the 'vertical torrent that seems to advance from one painting to another, sometimes fading out before it reaches the bottom of the canvas, only to fall unbidden from the upper edge of another. The paint seems unstoppable: an image of the onrush of time itself.'

A series of smaller, figurative paintings on the ground floor depict domestic objects which assume a strong psychological charge when considered alongside the suicide figures. A pair of scissors becomes an instrument of potential self-harm, while the image of the solitary, frail dog - a recurring motif through Howard's work - speaks hauntingly of abuse and neglect. In these works, Howard's exploration of suicide moves beyond that of literal depiction into regions of metaphor, symbolism and allusion: the 'black dog', for example, traditionally connotes depression and melancholia.

On the top floor, five large-format abstract works develop Howard's theme still further, taking it into the realm of the metaphysical by confronting ideas of disembodiment or transcendence. Liberated from the binds of representation, and yet curiously titled 'suicide paintings', these works feature smooth painterly expanses which are underpinned by a natural architecture strongly orientated around the vertical and the horizontal. Possessing a dazzling luminosity, their layers of paint are built up through a technique dictated equally by gravity, precision and chance.

In the preliminary line drawings that conclude the exhibition the abject figure finds its most striking expression, displaying all the awkwardness and pathos of one of Egon Schiele's subjects. Like all of Howard's recent work, these ink studies represent what Dillon describes as 'an attempt to face up to the intimacy between torture and aesthetics'.

Howard graduated from Goldsmith's College in 1992 and has exhibited in many group exhibitions including 'The Choice', Exit Art, New York (1998), 'Shimmering Substance', The Cornerhouse, Manchester and Arnolfini Gallery, Bristol (2002), 'Intuition/(imprecision)' curated by Thomas Krens, Galerie Thaddaeus Ropac, Saltzburg, Austria (2004) and 'In the Darkest Hour There May Be Light: works from Damien Hirst's murderme collection', Serpentine Gallery, London (2006).