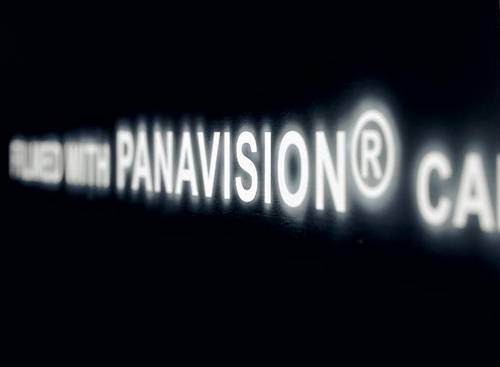 British artist Simon Patterson is to present 'Black-List', a major series of large scale paintings based on film titles and end credit sequences, for his first solo show at Haunch of Venison London.
Patterson works in a wide variety of media, including painting, sculpture, film and architectural projects, and has an ongoing interest in film and history. In 'Black-List', the matt black canvases are screen-like in format, the text appearing to glow, mimicking the appearance of cinema projection. As David Campany writes in the accompanying catalogue, "The flat blackness of the 'Black-List' canvases speaks of art, of Modernism in transition between the painterly surface and the industrial surface. The writing - so clearly cinematic - introduces what used to be called a 'double articulation': the already ambiguous black rectangles oscillate between canvas and screen."
The credits that scroll up the canvases are taken from several films including Michael Mann's 'Heat' and Martin Scorsese's 'Goodfellas'. The artist has replaced some of the featured names with those of Hollywood actors, directors, technicians and script writers who, in the 1940s and '50s, were accused of being communist sympathisers and who were subsequently notoriously blacklisted during one of the most shameful periods of American history.
Throughout his practice, Patterson takes widely recognised systems and forms that we use to classify or understand the world and subverts them by inserting apparently incongruous information. By undermining our certainty in systems that ordinarily are not questioned, Patterson challenges us to make unexpected connections between concepts, people and information. By using forms that are so familiar and trusted Patterson's representations gain their own legitimacy and point
to underlying interconnections between seemingly disparate phenomena.
Simon Patterson will also be introducing plans for a new project in commemoration of the war poet, Wilfred Owen, in the gallery entrance space. The project will see the re-working of the house where Owen spent his last days in Ors, France, before his tragic death on the battlefield. Designed to be a permanent memorial for the 90th anniversary of Owen's death, the project is due to open at the end of 2008 (please open the PDF in the 'Downloads' section for a full project description). Patterson will be producing a limited edition print portfolio to coincide with the exhibition.