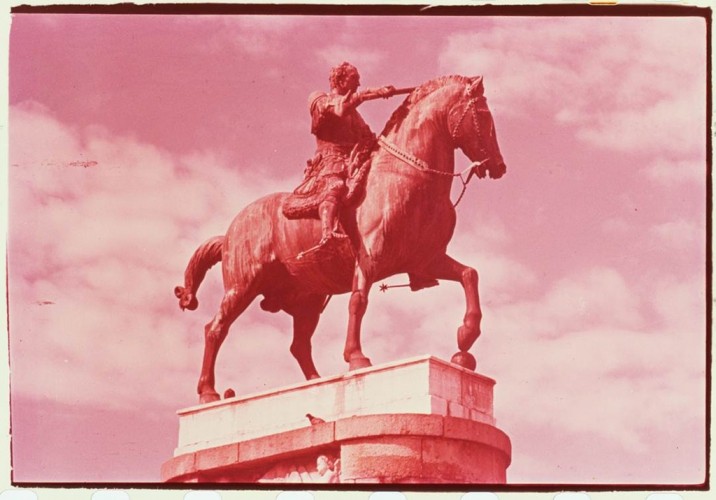 This exhibition includes a series of photographic diptychs, entitled Under Cartel, of equestrian statues from around the world; each photographic pairing represents the exchange of one sculpture for another. The second section of the exhibition is a grid display of paintings featuring the names of silent movie stars, which is a continuation of the Name Paintings series that Patterson has worked on since 1987.

Under Cartel is a historical (usually military) term meaning a written or verbal protocol regarding the status of exchanged prisoners of war or hostages. This new series of works derives from an earlier unrealised proposal called International Heroes (2002). Simply put: it is a potentially endless international exchange programme for equestrian statues. It would have been my proposal for the empty plinth in Trafalgar Square. Alternatively, it would be interesting to swap the equestrian statue of George IV in Trafalgar Square with that of Napoleon Bonaparte in Boulogne-sur-Mer – a literal cultural exchange but probably one that the British Council would perhaps not be willing to fund. I use photography the way some other artists might use a sketchbook. I collect images, especially when travelling, and they often take the form of taxonomies – which I suppose is obvious given the nature of some of my work. One of these taxonomies was of equestrian statues.
www.haunchofvenison.com