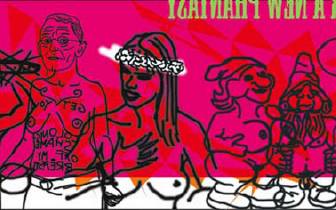 Tobias Rehberger (born Germany, in 1966) is one of the most prominent artists of his generation. He has exhibited throughout Europe to widespread critical acclaim, including recent major shows at Reina Sofia, Madrid (2005) and the Whitechapel Art Gallery, London (2004). Seven Naked Hermann Hesse Fans and other Gems is his first exhibition at Haunch of Venison.
Rehberger produces futuristic environments that play with light, space, furniture, signage and clothing, inspired by design classics and modernist art history. Sociable, interactive, utopian and playful, his work thrives on chance connections, unexpected encounters and the gaps between communication and understanding.
In this exhibition Rehberger explores notions of worth and systems of value. He appropriates both cheap plywood and natural materials such as gold and platinum, as well as design classics including a Ducati Supersport motorbike and Maserati cars, and transforms them, re-presenting them as art objects. Rehberger is interested in the conflict between function and aesthetic value, and here the objects lose their functionality but gain a new status as artworks. Together a New Phantasy, a mural in the exhibition, presents a series of naked figures, including Hermann Hesse. Hesse wrote about the struggle between art and society, and in Narziss und Goldmund (1930) he questioned the relative merits and rewards of business and art. By exposing Hesse and his fans as naked, Rehberger questions the value of artworks, and whether they can offer enlightenment as Hesse suggests. Rehberger also frequently incorporates an element of interaction into his exhibitions, and the Haunch of Venison staff will model individual works.
Tobias Rehberger was a student of Martin Kippenberger, and had his first solo exhibition in 1992. He has since exhibited in museums worldwide, and his work is included in many important international collections. Get a New Liver 2006, a major commission, was recently opened at Tate Liverpool. Rehberger is currently working on a film project for the Prada Foundation, Milan.
www.haunchofvenison.com