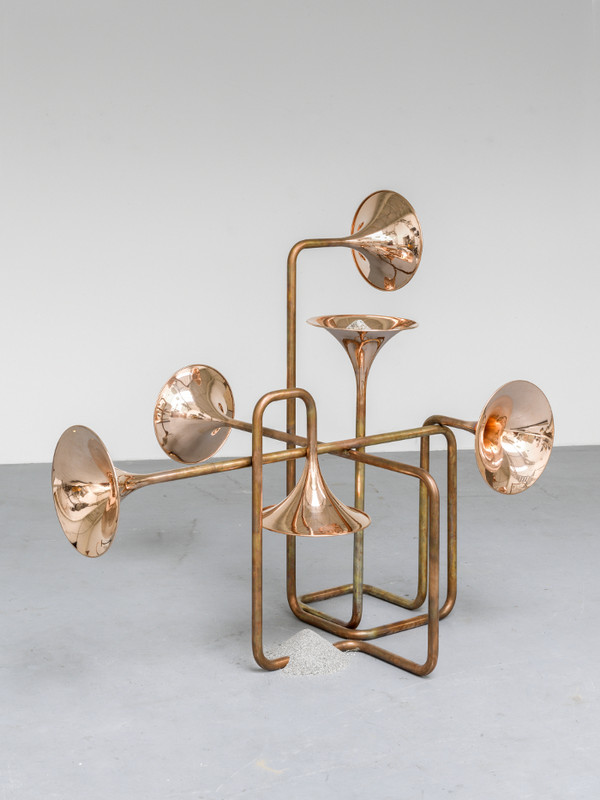 For more than a decade the artist Alicja Kwade (b. 1979, Katowice/Poland) has probed questions of astrophysics and philosophy in her sculptural work. Employing simple means, she seeks to uncover several layers of reality: two branches stand in a corner. Various precious metals are stacked on the floor, like statistics blocks. Boulders and rocks flood into the exhibition space.

But can nature produce two identical branches? Is the metal’s value today the same as it was yesterday? Kwade does not intend to deceive the viewer. Rather, she wants to reveal the illusions to which he is constantly subjected. How could something be certain and predictable in a universe which is dynamic and changeable down to its tiniest particle? And yet our current economic system rests on the promise of absolute certainty.

Advertising and media cannot know the future. Instead they create phoney certitudes, subtly exploiting people’s fears for the future for their own gain. Dealing with these topics by artistic means, Alicja Kwade illuminates, by way of analogies, current consumerist thinking and present-day mental frailties.

A catalogue in German and English featuring an introduction by Katja Blomberg will be published with Verlag der Buchhandlung Walther König.
www.hausamwaldsee.de