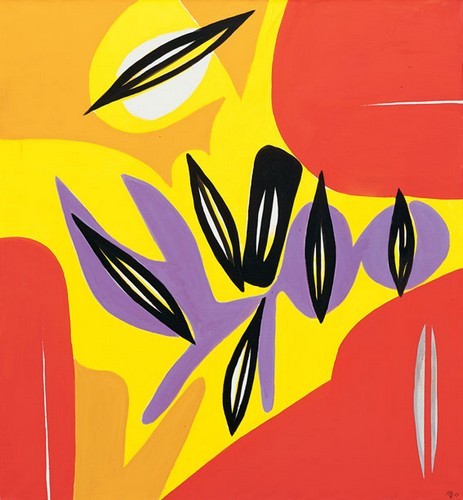 © E. Nay-Scheibler, Köln
E. W. Nay’s paintings are full of radiant colour and vitality. They are on a par with Henri Matisse’s cut outs and Ellsworth Kelly’s New York hard edge paintings of the 1960s.

Nay began his career in 1925 with Carl Hofer at the Hochschule in Berlin. The Nazis banned his work in 1937 denouncing it as “degenerate”. From 1950 onwards, he achieved international acclaim particularly in the USA. Having moved to Cologne and after a lifetime of work, he created a late work in the years leading up to his death in 1968 which is, at least by German standards, quite unique.

For the first time in forty years, his abstract works from this period will be presented in Berlin. Haus am Waldsee provides the perfect opportunity to rediscover one of the great German post-war painters and his highly relevant last works.

The exhibition presents 20 large paintings and 10 watercolours from the period between 1955 and 1968.
www.hausamwaldsee.de