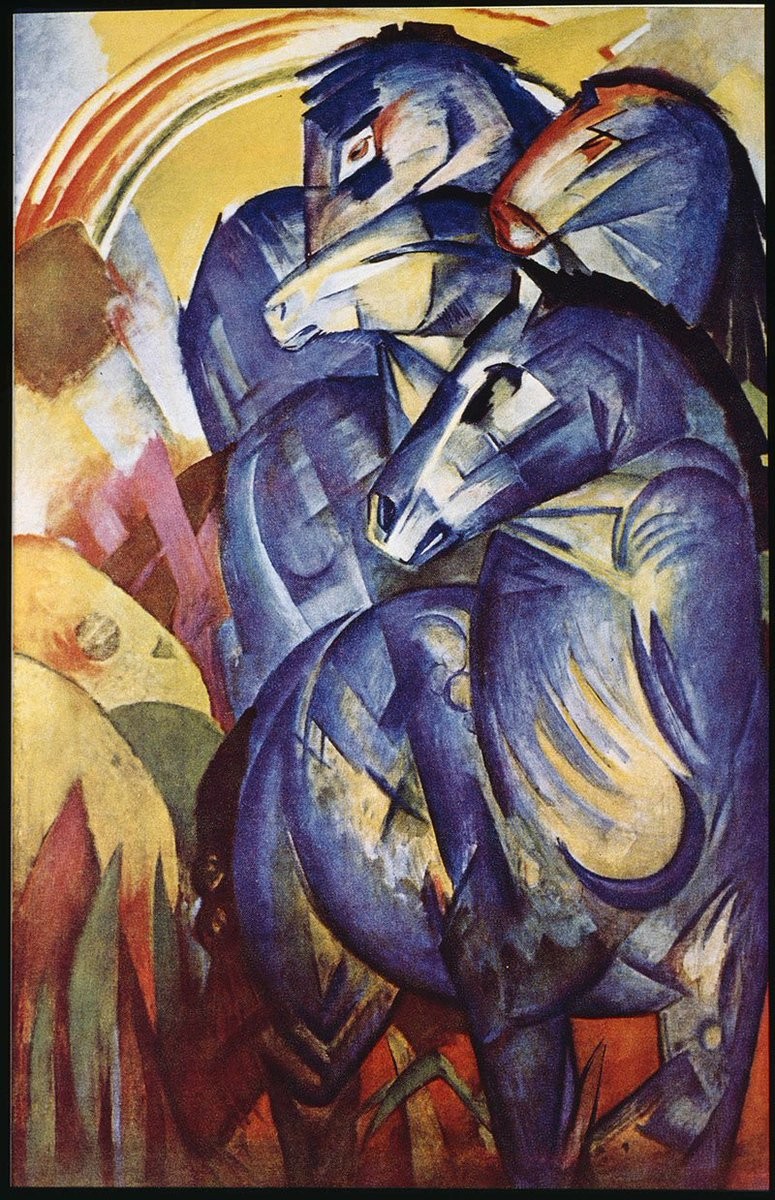 Contemporary artists in search of a lost masterpiece

Haus am Waldsee in cooperation with Staatliche Graphische Sammlung in Munich

Preliminaries
The whereabouts of the lost masterpiece Turm der blauen Pferde by Franz Marc are still subject to speculation, 80 years after the disappearance of the painting that frames the foreboding of a new age. Haus am Waldsee in Berlin and the Staatliche Graphische Sammlung in Munich have invited twenty contemporary artists to reflect on the fate of that famous artwork. The artists participating in this joint exhibition look at its history through the lens of painting, sculpture, photography, installation and literature.

The painting
Der Turm der blauen Pferde is one of the defining works of German Expressionism and a central piece of the legacy of the artist group The Blue Rider. The painting quickly became famous among the liberal society of Berlin in the years of the Weimar Republic, was celebrated for its outstanding artistic quality and perceived against the background of the tragic death of the artist in the battle of Verdun in 1916.
Fresh from the studio, Franz Marc’s painting was presented to the public at the Berlin gallery Der Sturm in 1913 and allegedly last seen either in 1945 or the winter of 1948/49, respectively, before disappearing for good. A masterpiece of German Expressionism, which had been part of the National Gallery’s collection since 1919 and exhibited at Kronprinzen-Palais Unter den Linden until 1936, was branded "degenerate art", yet apparently survived the Second World War in Germany.Independently of one another, three witnesses have publicly claimed to have seen Der Turm der blauen Pferde in Berlin after World War II. They assert that it was seen in the spring of 1945 and in the winter of 1948/49 at what would later become Haus am Waldsee and in the neighbouring building, the former home of the superintendent of the Berlin police von Helldorff.
Until the 1970s, this re-emergence of a once popular painting has been largely shrouded in silence. Why this happened is one of the central questions asked by contemporary artists in the Berlin part of the exhibition MISSING Der Turm der blauen Pferde by Franz Marc. The Munich part of the exhibition is based on the preliminary drawing for the painting in the form of a colour postcard, while it focuses on the question how the myth surrounding the artist and his most eminent artwork was created.

Reflections with the benefit of hindsight
The exhibition at the Berlin Haus am Waldsee deals primarily with the loss of the painting, the rumours surrounding its disappearance and the hushed silence of the post-war period. The photographer Johanna Diehl, for instance, reflects on that silence she renders visible as if through a murky veil, taking the example of her own family’s history. Other artists invent new rumours surrounding the painting that point to the USA or to the Netherlands (Marcel van Eeden), or they copy the work in order to re-enact it as a ruin in the Romantic sense (Norbert Bisky). Some artists address the subject of loss as a blank (Arturo Herrera, Christian Jankowski) or the moment of the painter’s death (Rémy Markowitsch, Birgit Brenner), which has contributed greatly to the painting’s myth. The show is about the dust of history settling, about continuities of philosophical outlooks, ideologies and the shadows of the past (Peter Rösel) or, indeed, about the question what would happen, if Der Turm der blauen Pferde suddenly re-emerges (Via Lewandowsky). A neon sign outdoors reminds us of the fact that there is no certainty because everything could be different (Tobias Rehberger). Finally, a literary text by Julia Franck circles the relationship between Else Lasker-Schüler and her artist friend Franz Marc. Lasker-Schüler had some influence on the creation of Der Turm der blauen Pferde in 1913. Has it been painted for her? After all, the postcard with the preliminary drawing was made for her in 1912. Martin Assig sets in motion an intimate religious conversation. He enlists the Four Horsemen of the Apocalypse from the Book of Revelation to tell his story about the painting, which culminates in the imploring call of " Komm, komm, komm" (come, come, come) that conjugates the mourning of its loss.

In the Munich part, in the city where the Blue Rider was founded, Slawomir Elsner’s large-scale drawing leaves Der Turm der blauen Pferde wraithlike. The picture assumes a life of its own in the untouchable nature of its motif. Jana Gunstheimer poses the question what remains when a picture is raddled by time, memory fades and is replaced by a second, transformed existence. A spatial collage by Almut Hilf shows views of historic exhibition venues: Münchener Secession, the Berlin Kronprinzen-Palais and the Hofgarten arcades in Munich. The painting, however, that helped determine the respective genius loci is left out. The idea that image-motifs may enrich consumer goods and thus assume a life of their own in the world wide web, is examined in a restaging of merchandising products (Viktoria Binschtok). This is actually the successor to the formerly classical-analogue consumption of images, which Dieter Blum recalls with the photograph of a herd of wild horses in billboard size. Martial implication appearing in Der Turm der blauen Pferde are investigated by Tatjana Doll and Thomas Kilpper, while Dierk Schmidt uncovers contemporary historical interrelations surrounding an artwork that was ostracised as ""degenerate".

While there is still no trace of the 200 by 130 centimetre canvas, a postcard-sized colour sketch has survived, which Franz Marc sent to the poetess and friend Else Lasker-Schüler from one Berlin address to another just before the turn of the year 1913 to arrange a meeting with her. That postcard was purchased by Ludwig Justi for the New Section of the National Gallery at Kronprinzen-Palais in Berlin in 1919, three years after Franz Marc had died near Verdun. Together with twenty-seven other postcards to Lasker-Schüler, it found its way into the collection Fohn in 1939 and thence became part of Staatliche Graphische Sammlung München as a deposit by Bayerische Staatsgemäldesammlungen in the 1960s.
After the first purges of German museums by the campaign "Degenerate Art" the painting Der Turm der blauen Pferde remained on public view at Kronprinzen-Palais until the autumn of 1936. Bertolt Brecht wrote from his exile: “I like the blue horses that have caused more furore than all the steeds of Achilles. And I am annoyed when painters are told they could not paint horses blue; I cannot see the crime in that. Society will survive this slight disfiguration of reality.”

In 1928 the famous image adorned the frontispiece of the children’s book Der deutschen Jugend neues Wunderhorn, which found its way into many youth’s bedsit. Kronprinzen-Palais was closed to the public in the autumn of 1936. While Der Turm der blauen Pferde was displayed and pilloried in the show "Entartete Kunst" (Degenerate Art) at the Hofgarten arcades in Munich in July 1937, the painting was still reproduced in colour for the latest edition of the Brockhaus encyclopaedia of the same year. After protests by the association of German officers against the defamation of a lieutenant who died for his country, Adolf Hitler himself ordered the painting’s removal from the so-called show of infamy of which it had only been part for a week. From Munich the painting was taken to the central depot of Degenerate Art at Köpenicker Strasse in Berlin.
In early 1938, Hermann Göring, in collusion with Adolf Hitler and Joseph Goebbels, had thirteen paintings of classical Modernism put aside from the "degenerate" stock in a secret move to sell them on the international market. Among those paintings was Der Turm der blauen Pferde. Göring’s agent in this matter, the carpet dealer Josef Angerer, was supposed to sell the paintings for foreign currency, an enterprise that evidently failed. After the outbreak of the Second World War interest in the paintings faded.

Ever since, the whereabouts of Der Turm der blauen Pferde is a matter of speculation. It is rumoured that is was stored in the cellar of the official villa of Hermann Göring at Leipziger Platz in Berlin. Other reports of varying credibility have it hanging at the Prussian State Ministry or at Carinhall. What is credible is that it was seen near Hermann Göring’s offices on Leipziger Platz after the end of hostilities. It is also likely that Russian officers moved it to Argentinische Allee 30, to what is now Haus am Waldsee, for reasons of securing it. Before the house began having regular exhibitions in January 1946 it might have been moved next door, where its trail finally grows cold in 1949. Der Turm der blauen Pferde has been lost ever since.
The accompanying exhibition program is available online on the websites of Haus am Waldsee and Staatliche Graphische Sammlung München. There will be events like the children’s opening, a reading by Julia Franck and a lecture by Brigitte Roßbeck, the launch of a book by Björn Vedder, a symposium (with Christian Welzbacher and Stefan Koldehoff, among others), artist’s dinners, artist talks, guided tours and concerts.