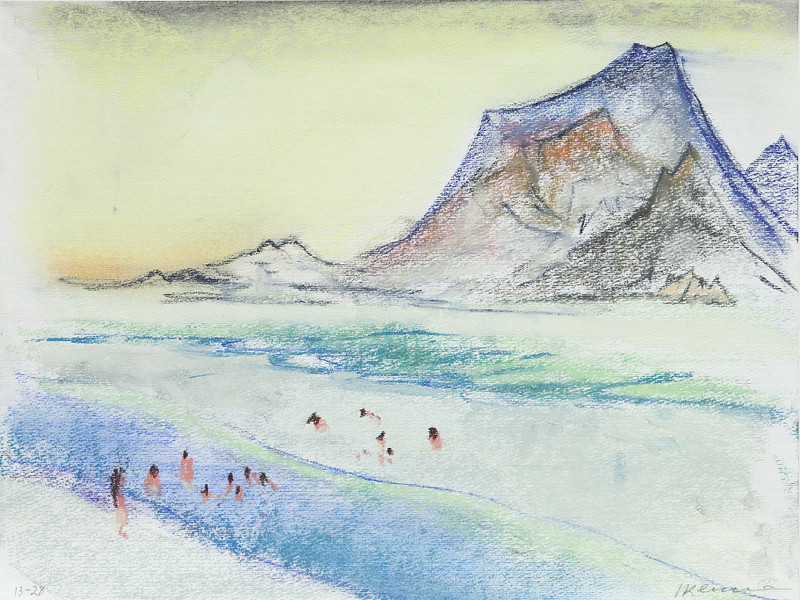 The Japanese artist Leiko Ikemura has delved into the world of the coloured woodcuts by Utagawa Hiroshige (1797–1853) since 1989 and again 2009. With delicate pastels she records her responses to his most famous series, the "Fifty-Three Stations of the Tōkaidō", those woodcuts covering the pre-eminent sights along the eastern coast of Honshū, of which the show at Haus am Waldsee will show twelve prints in a dialogue with the originals by Ikemura.
The serene meeting of popular landscapes from around the middle of the 19th century with the interpretations of a confident painter and sculptress in the Berlin of the early 21st century seems like a mirage rising from the depths of the world’s collective memory into our present age.
Leiko Ikemura was born in Mie, Japan. She studied Spanish literature at the university in Osaka and, from 1972, in Granada, where she also took up a course in sculpture. Between 1973 and 1978 she studied painting at the academy in Seville, before settling in Zürich in 1979. In 1983 she was Stadtzeichnerin von Nürnberg, a prestigious stipend by the Faber-Castell company. In 1986 she moved to Cologne. In 1991 she was appointed professor for painting at the Berlin Hochschule der Künste. She will be emeritus early from UdK by August, 2015.
Among the numerous prizes awarded to Ikemura are the August Macke Preis (2010), the JaDe-Preis (2013) and the Prize of Cologne Fine Art (2014). Ikemura lives and works in Berlin and Cologne.
We are grateful to Staatlichen Museen zu Berlin – Preußischer Kulturbesitz – Museum für Asiatische Kunst for generously lending us the works by Utagawa Hiroshige.
Followed by a solo show of Leiko Ikemura at Haus am Waldsee in the spring of 2016.

Supported by the Berlin borough of Steglitz-Zehlendorf, the Governing Mayor of Berlin – Senatorial Office – Cultural Affairs and the Association of Friends and Supporters of Haus am Waldsee e.V.
www.hausamwaldsee.de