One Orbit Of The Sun 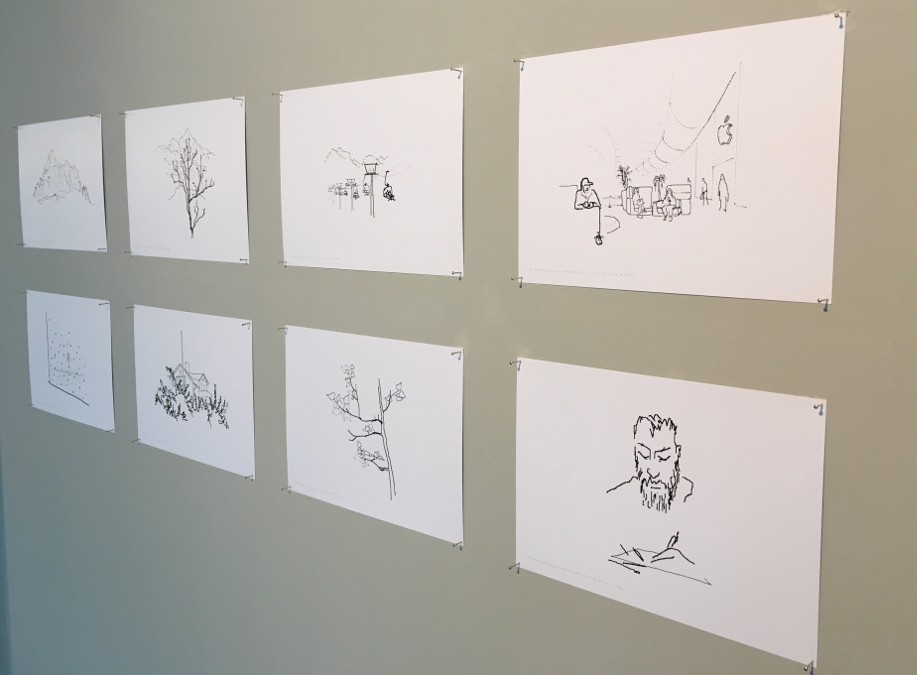 For the seventh “showcase exhibition” at Bikini Berlin Haus am Waldsee presents selected drawings from the current cycle entitled One Orbit of the Sun by British artist Simon Faithfull (b. 1966), who lives and works in Berlin and London. For more than ten years Faithfull has created his sketchbooks digitally instead of on paper. In doing so he combines a practice dating back to the Renaissance period – the recording of fleeting everyday moments – with the latest digital technology.

To begin with Faithfull produced drawings on a BlackBerry whereas today he works through a customised app on another smartphone. The sheets on display are print-outs in which the artist captures moments from the period between April 2017 and April 2018. We learn a good deal on the daily routines of a contemporary, internationally active artist who commutes between London and Berlin and is permanently on the move to give lectures or to press ahead with his projects in every corner of the globe.

Alongside everyday moments from Berlin and London we find impressions of Iceland, Jordan, the Swiss Alps, Miami Beach, California or the Everglades National Park in the USA as well as Wadi Rum in Jordan. The drawings are never representational. They always show subjective views as traces of a moment of pause. After all, Faithfull could have recorded the moment with the camera in his mobile device. As a draughtsman, however, he deliberately chose the slower medium that draws, most of all, on closer inspection.

The question of original and reproduction appears to be answered long since in Simon Faithfull’s work. The printouts in the exhibition come in editions of two, plus a single artist proof. Thus, the artist employs a well-attuned strategy of artistic photography, limiting the print run of his sheets. In doing so he translates the drawing – which utilises the means of the potentially infinite reproduction of the digital net – back into the analogue world of the original – yet one that is no longer singular but, like in photography, simply limited to the smallest possible print run.

Until the close of the exhibition on April 14, 2018, Faithfull continued to draw, mostly at the Berlin Zoo. The results were printed and integrated into the show. In that way, the show grew until the annual cycle has been completed. Concurrently, the works were being published on social media.
www.hausamwaldsee.de