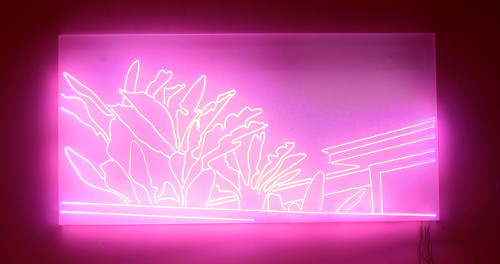 In the exhibition “Sven Drühl - Simulationen, Landschaft jenseits der Wirklichkeit” Haus am Waldsee presents one of more reflective of contemporary German artists. For more than fifteen years his paintings draw the strategies of sampling, remixing, reutilising and recycling.
While the audio collages of DJs and VJs have achieved artistic status in the clubs of the megacities, Drühl develops images in parallel, which are fuelled by international art dating back to the early 19th century. He employs his signature abstract planar technique to translate quotes by Caspar David Friedrich, André Derain, Edward Theodore Compton, from Japanese woodcuts from the 1920s, photographs by Alfred Renger-Patzsch, Sebastiãno Salgado and Wolfgang Tillmans as well as digital computer graphics into pictures on pictures. By unusual means such as silicon, lacquer and oil Drühl construes a world of detailed artificiality that utilises the viral, simultaneous and simulating potential of our digitised present and mirrors it without false romanticism. The result is a peculiar type of realism that interprets the original, which has been reproduced and multiplied a thousand times over, breaking it down into a unique painting full of artisan finesse.
Among his extensive production of large-format canvases, neons and works on paper, which are, for the most part, addressed to architecture and landscape, the present exhibition places the focus on Drühl’s landscape painting. Thanks to extraordinarily generous loans from private collections the show achieves a broad survey of Sven Drühl’s output since 2002.
The “simulations” in the show’s title at once refer to the profoundly scientific curiosity and analytical powers of the artist, mathematician and theorist, who has lived in Berlin since 2003. Having graduated in art and mathematics at the University of Essen, Drühl is appointed to several teaching positions and visiting professorships in Essen, Frankfurt a. M., Dresden, Leipzig and Berlin. He is awarded prizes and stipends, which take him, among other places, to New York. Aside from his studio work the notoriously curious workaholic gains a PhD in art science while publishing widely as a theorist and curator. Since 2002 the 48-year-old has dedicated himself exclusively to painting, which represents a medium to him in which he is able to express his complex researches in what seems, to him, the most convincing manner.
Drühl’s style of panting is planar and poster-like. Its colour scheme is oriented towards nature in its extremes. His pictures either exaggerate to become slightly signposted or they cite their zoomed-in motifs in black-and-white or even entirely in nocturnal pitch-black. Sven Drühl works on parallel canvases in series that can be pursued, left alone, resumed, expanded and dropped altogether. With astonishing freedom he does not allow his success to impel him but decides instead according to his respective interest which thoughts are taken up again and carried and which are to be jettisoned and abandoned. The result is a complex œuvre that generates concentrated, convincing art about art as a metaphor of our present, which has been digitised to our very thinking.
A bilingual catalogue with an introduction by Katja Blomberg and an essay by Martin Engler will be published with Walther König Books. German/English. 80 pp. € 18

The exhibition is part of the Berlin Art Week 2016
www.hausamwaldsee.de