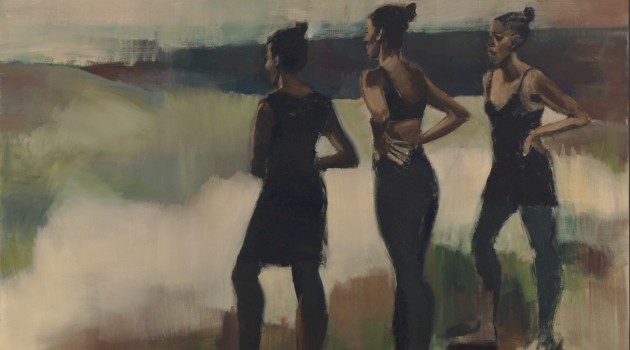 Capsule 03 presents new works by British-Ghanaian artist Lynette Yiadom-Boakye
(born in 1977 in London). Her paintings were first exhibited in 2006 at the Bienal Internacional de Arte Contemporaneo in Seville; numerous solo and group exhibitions followed, including appearances at the 55th Biennale di Venezia in 2013, the 2015 Sharjah Biennial and at London's Serpentine Gallery, also in 2015. Yiadom-Boakye was awarded the Pinchuk Foundation Future Generation Prize in 2012, and was nominated for the Turner Prize in 2013.
Yiadom-Boakye's paintings move within the European tradition of figurative painting and illustrate its full range of formats: from small, intimate closeups to large-scale works whose size and impact are reminiscent of history painting. With her expressive representations of the human figure, the artist examines the formal mechanisms of the medium of painting and reveals profound psychological dimensions in her works, which focus on fictional characters that exist beyond our world in a different time and in an unknown location. According to the artist, the figures "do not share our concerns or anxieties. They are somewhere else altogether." Nevertheless, they are in no way foreign or strange but, are rather almost familiar. They are imaginary and constructed out of set pieces of the artist's personal imagery, from her perceptions and stored templates. The spatial contexts in which the characters exist appear to be reduced to a few attributes. The representations thus present no narratives, but leave the viewer the space to project his or her own ideas on or into the images.
Yiadom-Boakye's figures evolve in the painting process and are developed from the paint itself. Her paintings' palette is often dark and exhibits a certain preference for earthy tones, from whose subdued lighting strong color accents emerge. Her protagonists are exclusively black, and thereby challenge the accepted norm of Western European figurative painting. "People ask me, 'Why do you not paint all the figures green?" – 'Because I want them to look real; this is not a Benetton advert.' Of course it's political. Everything is political."
www.hausderkunst.de