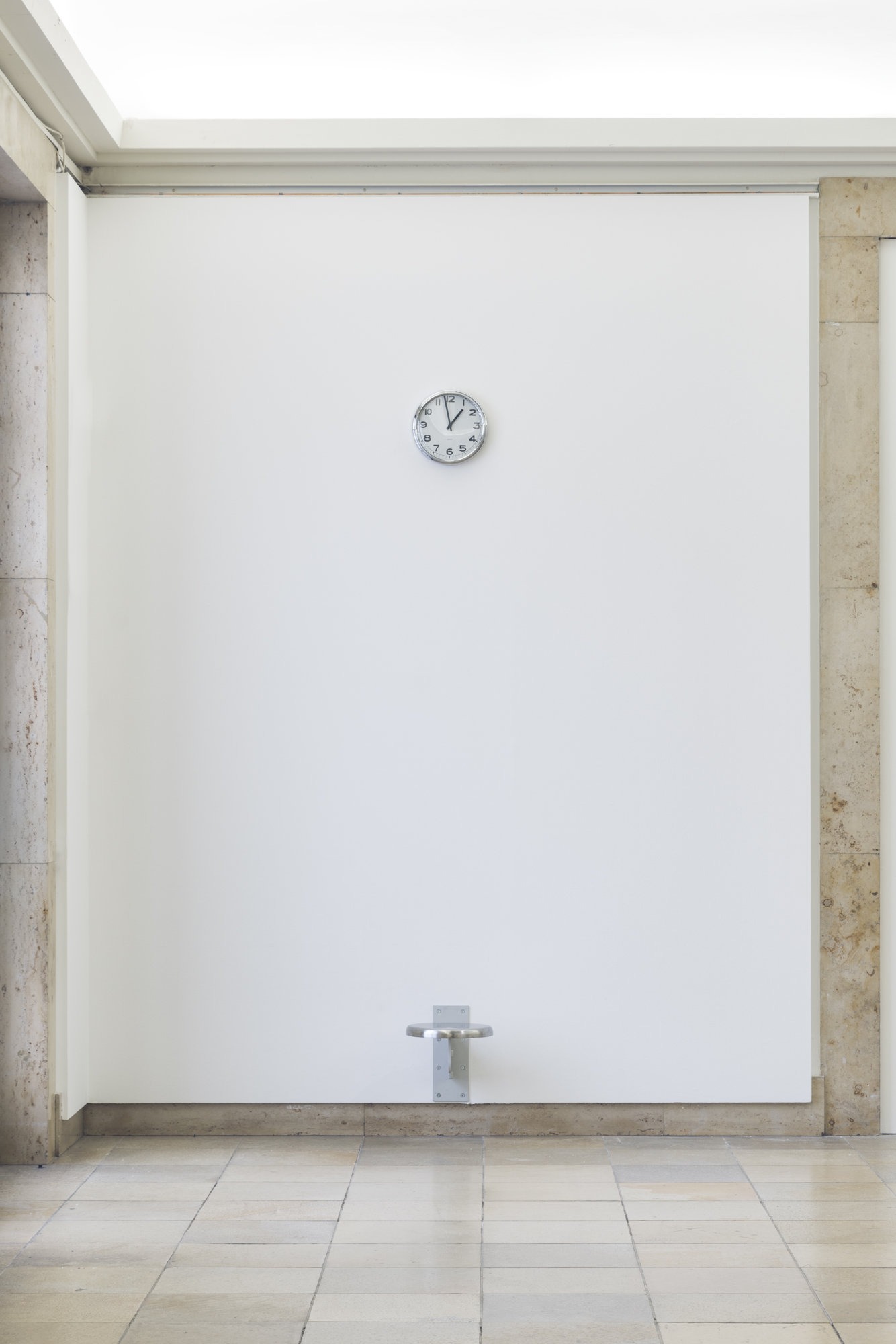 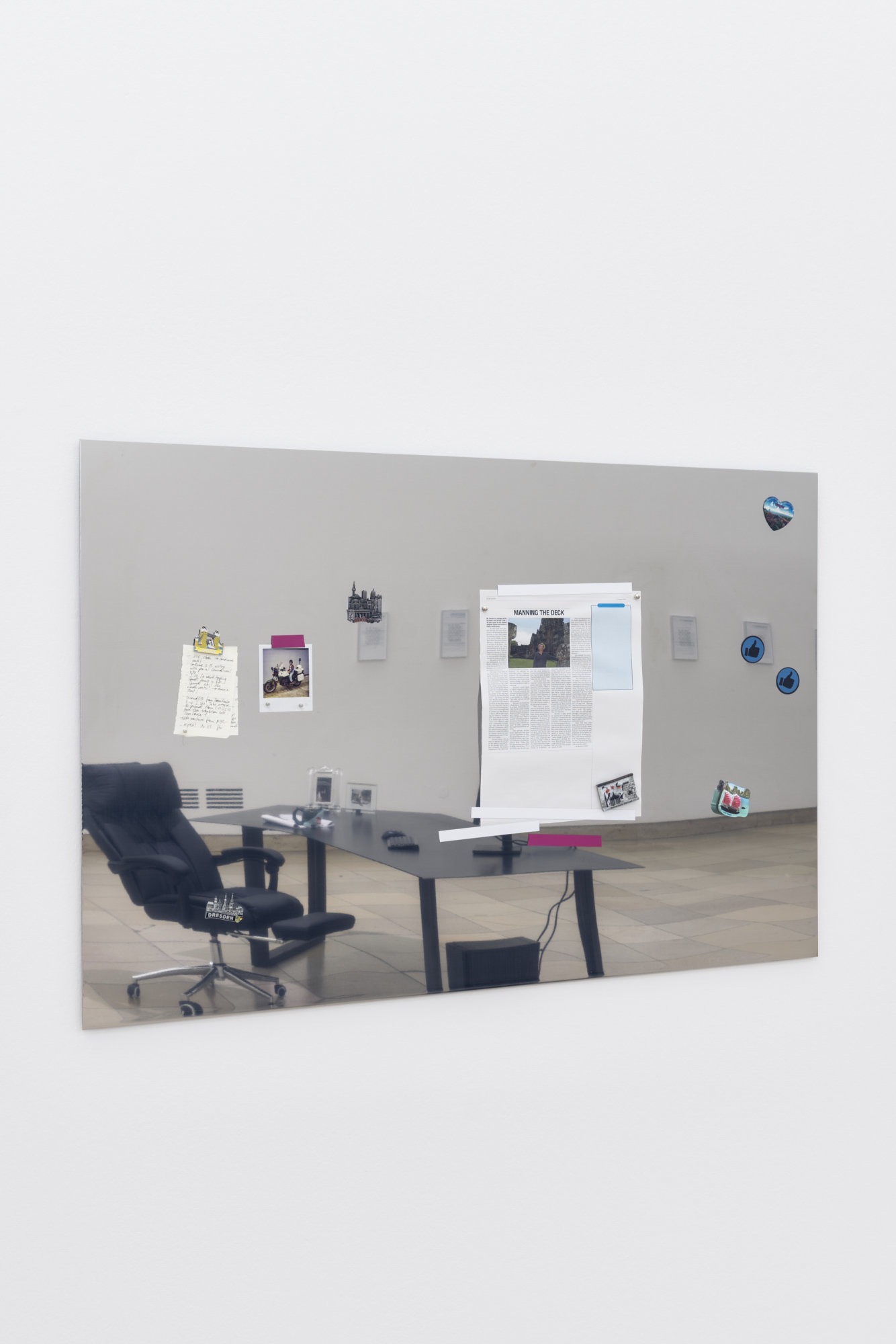 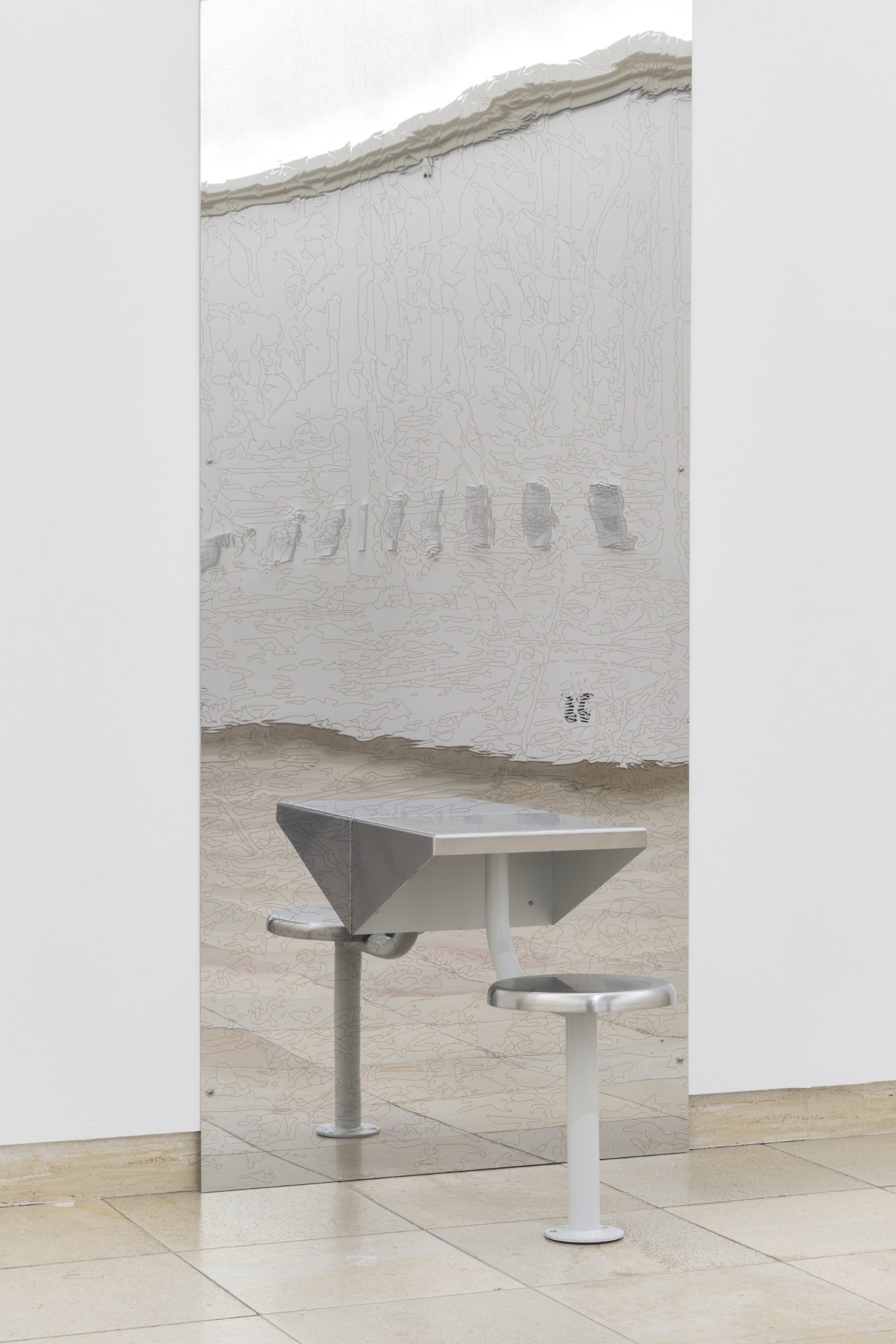 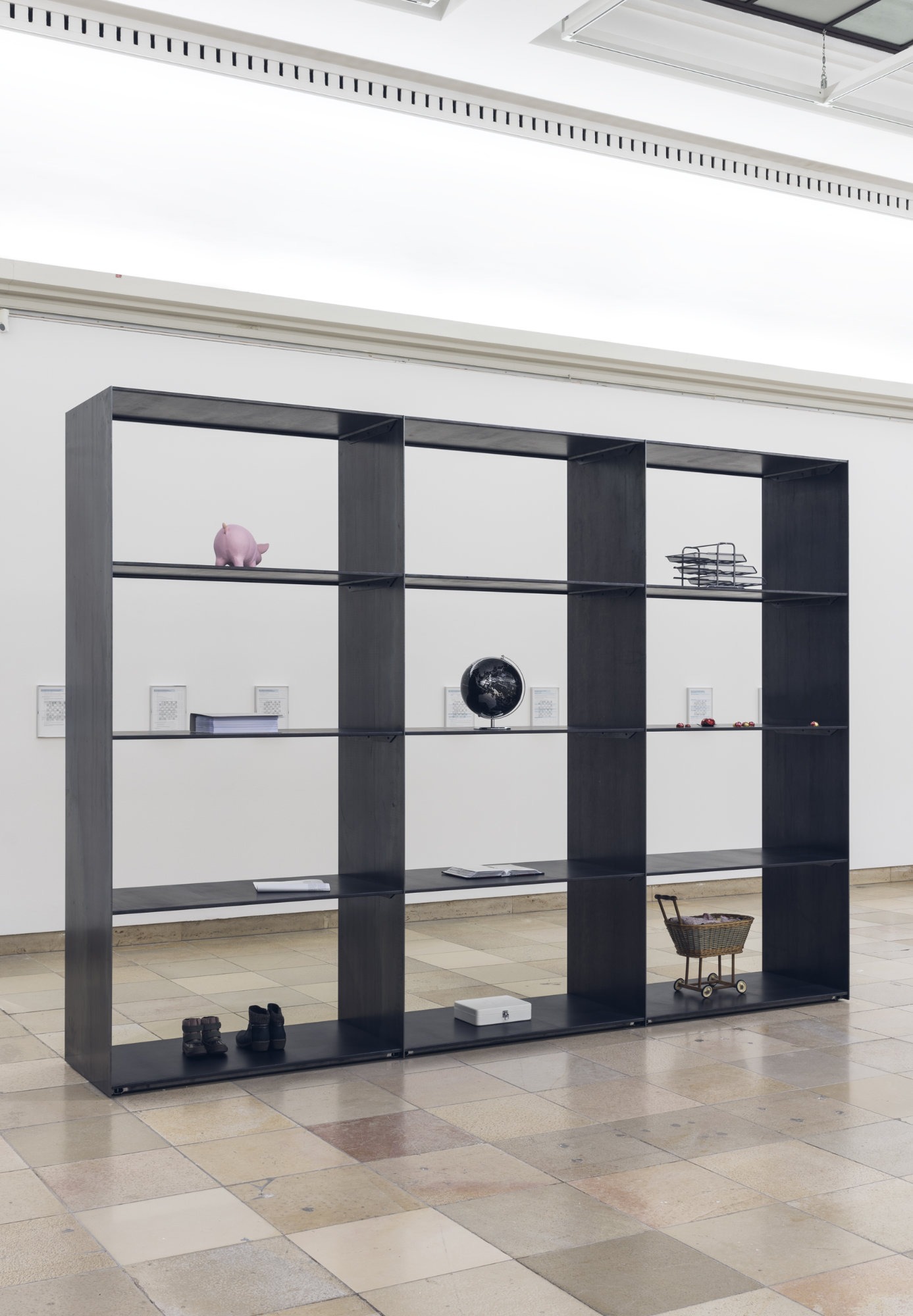 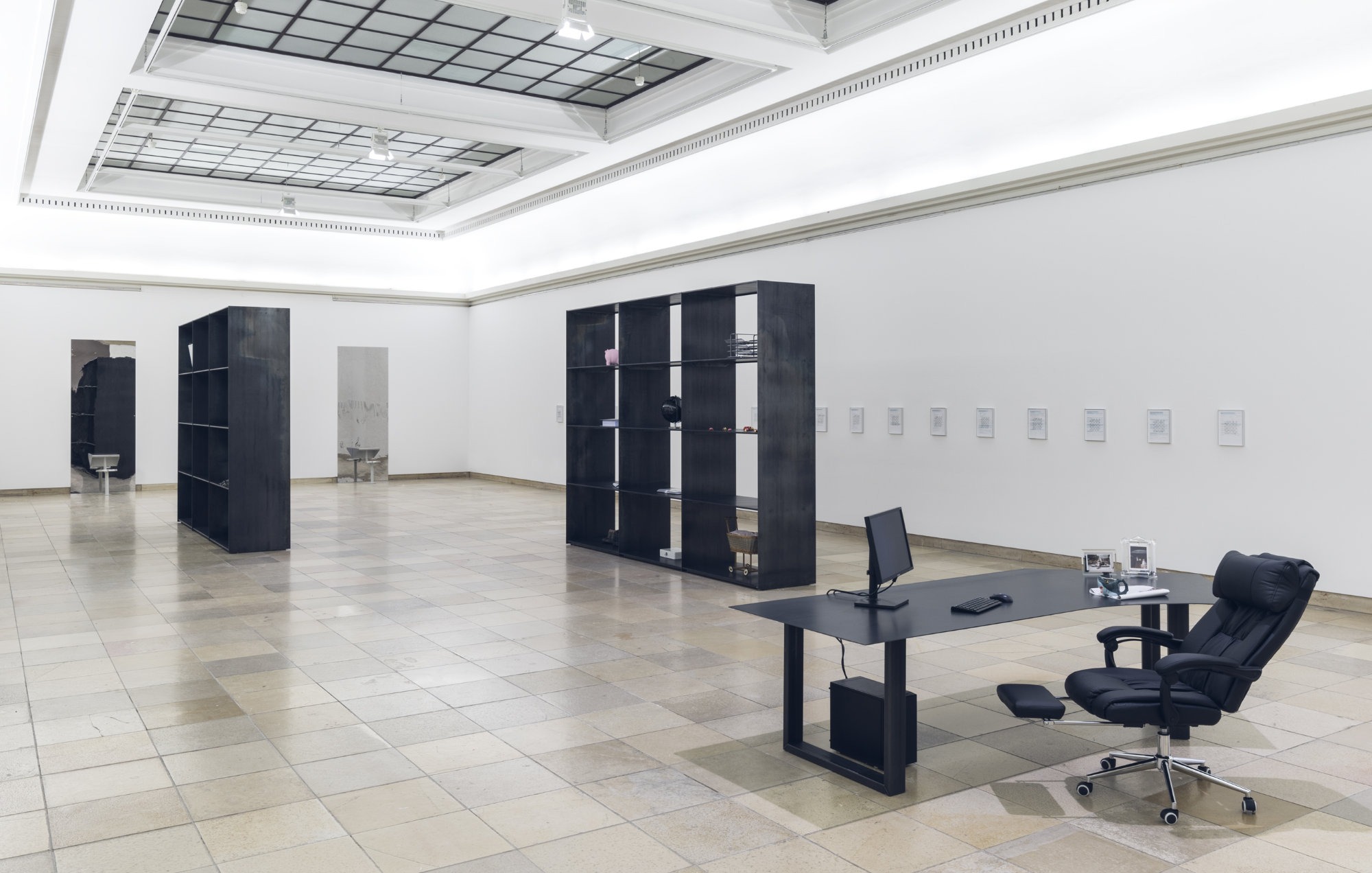 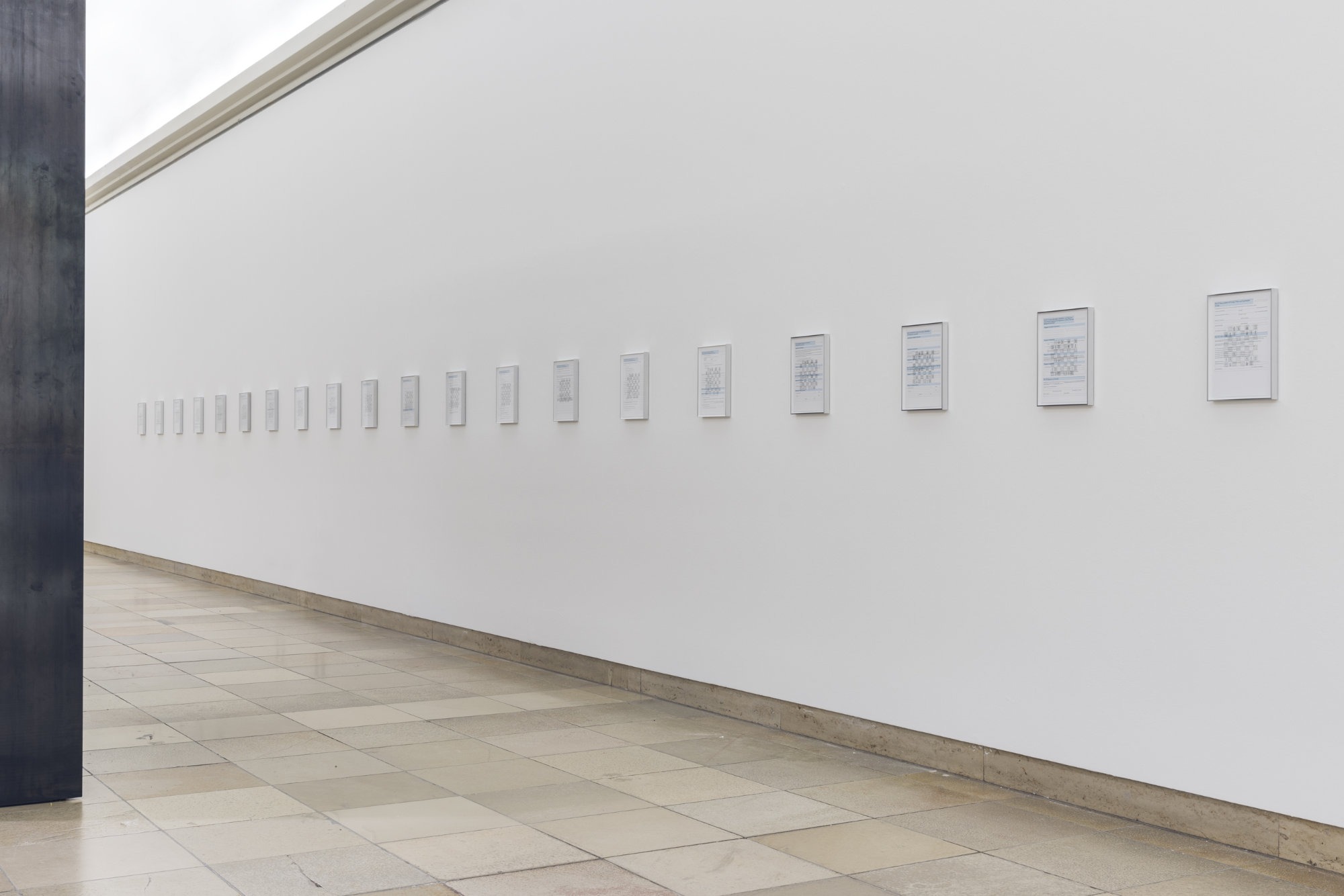 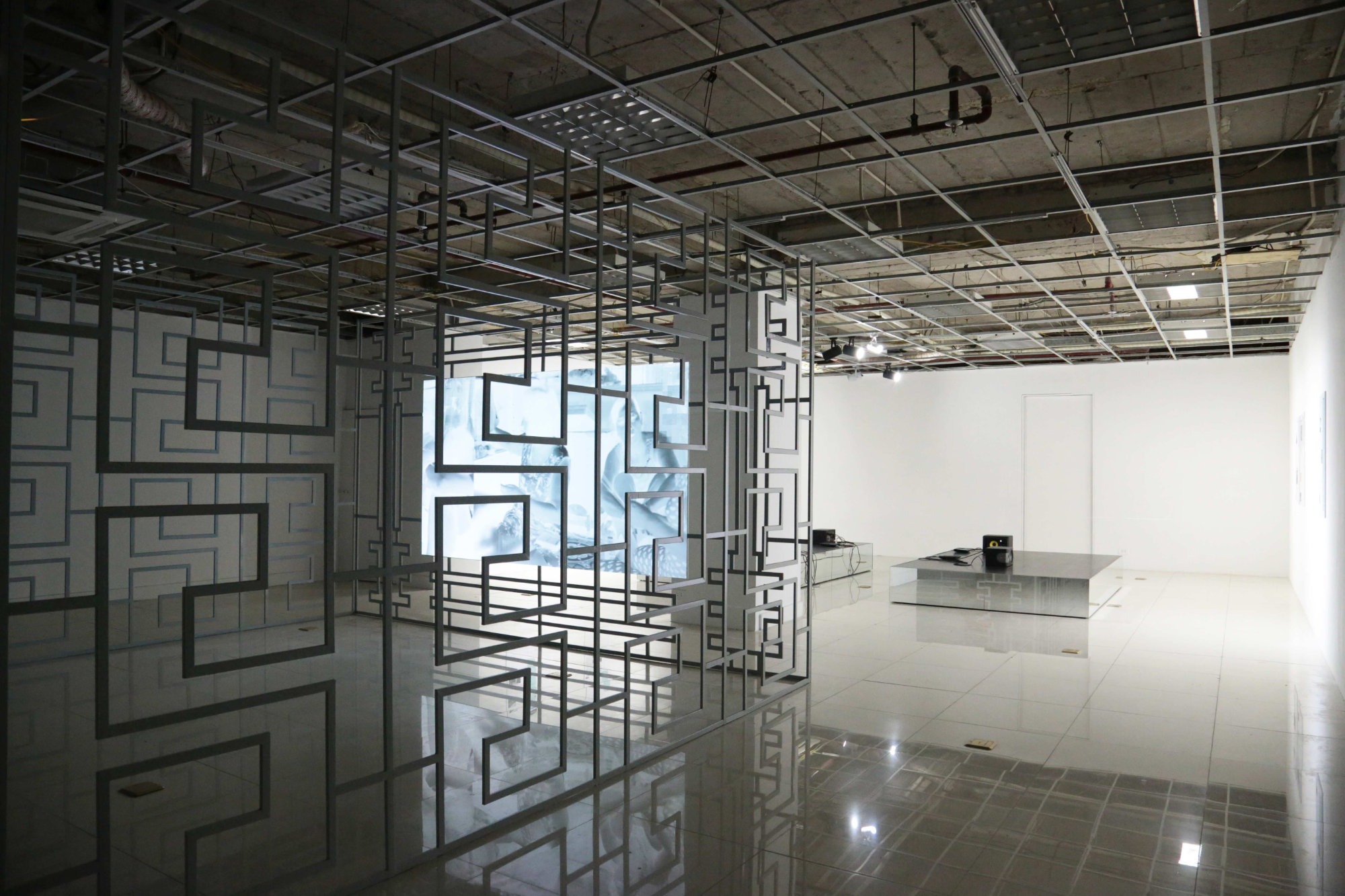 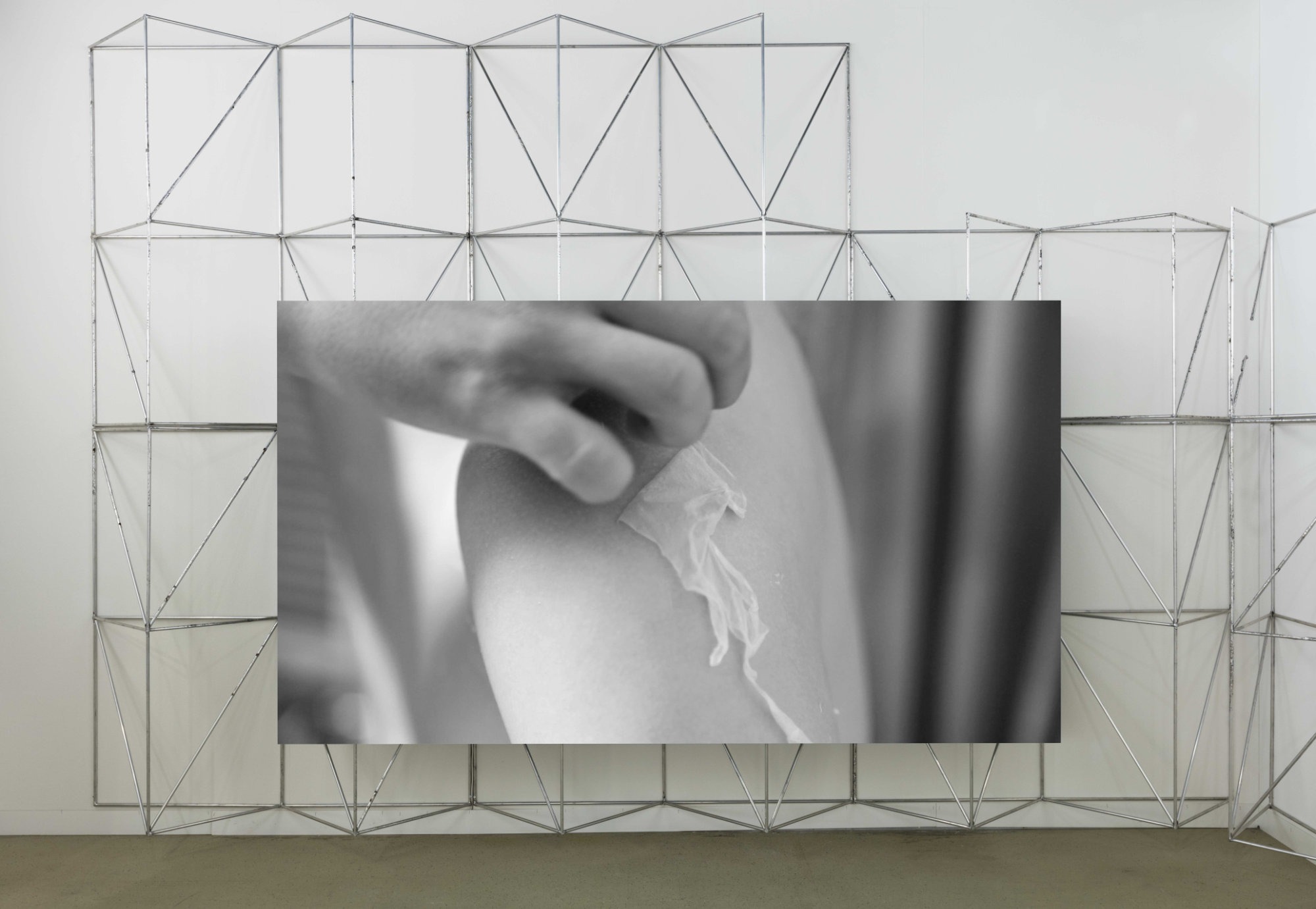 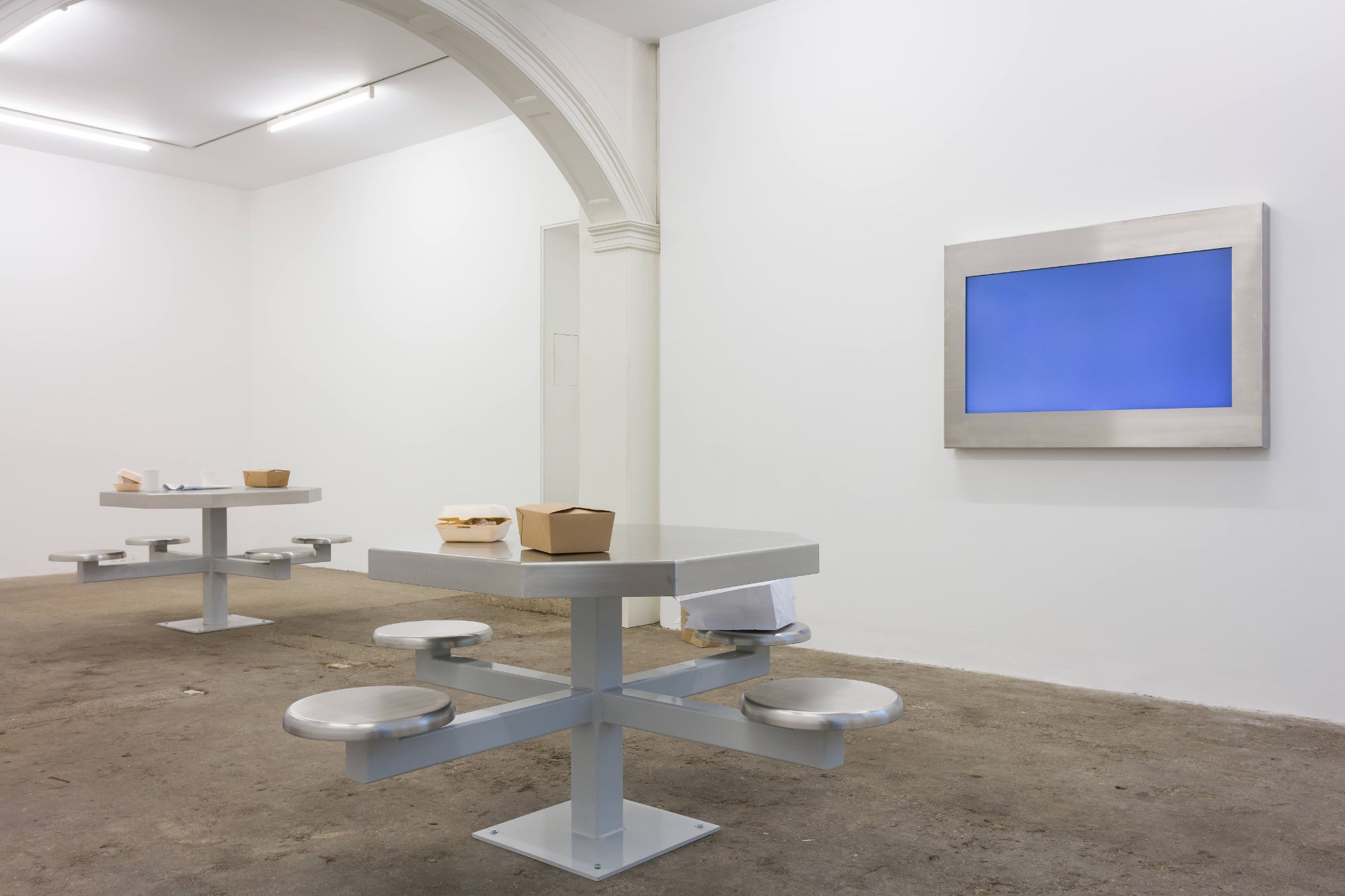 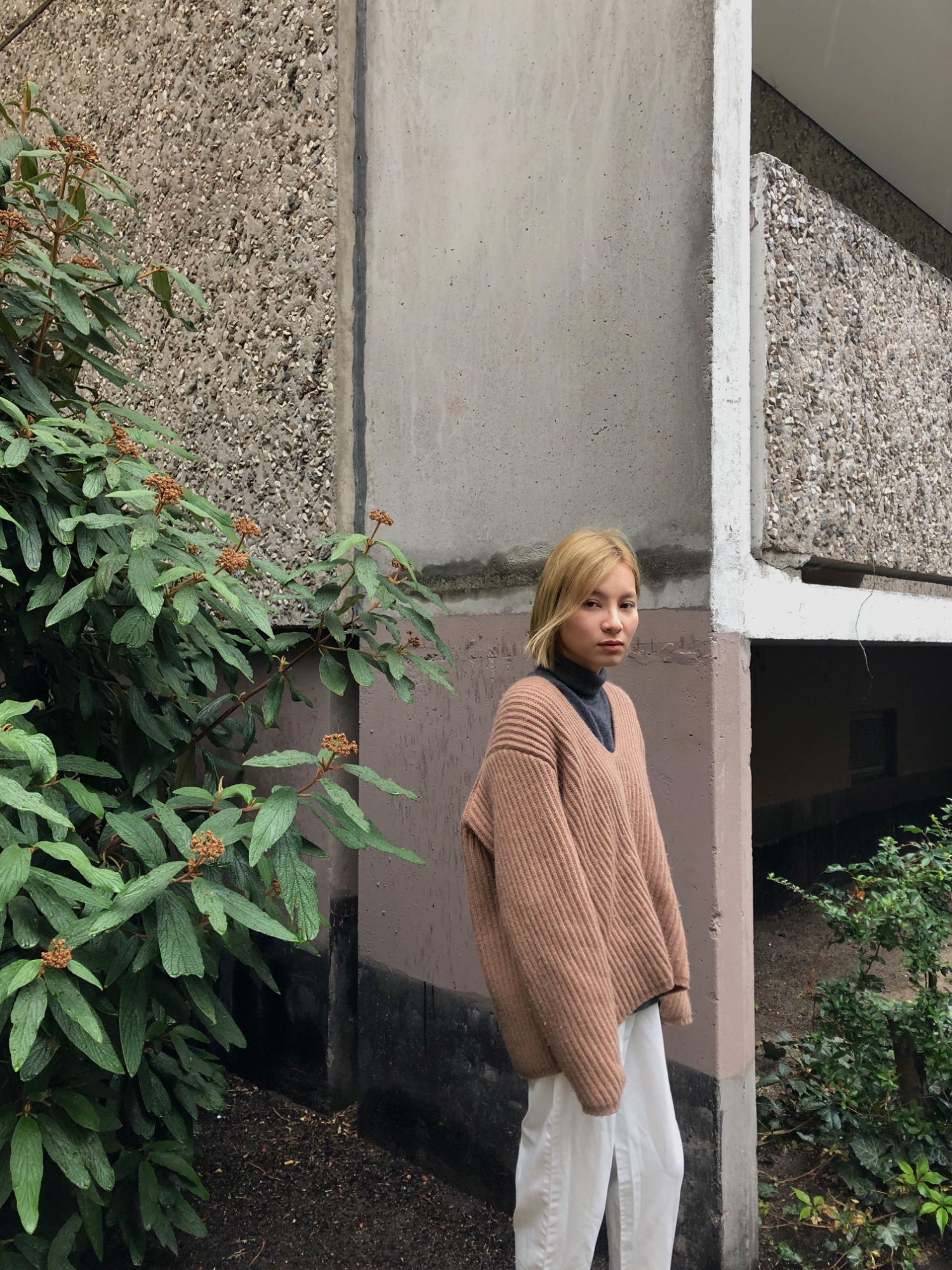 Capsule 11 presents a new installation by the German/Vietnamese artist Sung Tieu (b. 1987 in Hai Duong, Vietnam) forming her largest and most expansive work to date. Entitled “Zugzwang,” this multimedia installation investigates the psychological effects of administrative apparati and the politics of its subsequent design aesthetics.

The interior spaces of immigration bureaus, registration offices and modern penal institutions constitute Tieu‘s point of departure. For example, the stainless-steel seats were produced by a manufacturer of prison furniture in England, and display a striking similarity to those in the waiting rooms of administrative buildings. The exhibition space is dominated by these seating arrangements; two large shelves designed by the artist and framed documents – forms for asylum, residency and naturalization. Based upon anthropological studies of administrative systems, Tieu has edited and modified these documents so they cannot be assigned to a particular state or country, but their underlying logic remains clear: the information an applicant provides within a specific context is subsequently reviewed by the state for possible risks and future costs, which in turn can prove to be detrimental to the applicant. Tieu thus reveals the contradictions, inconsistencies and randomness of these situations and demonstrates how they encroach upon the subjectivity of the individual and how these institutions seek to control all those who do not conform to the rules of these spaces; compelling those seeking refuge to enter into grey zones of legality.

At times intimate, at others bombastic, a multi-channel sound installation blends into this sculptural mise-en-scene: Tieu interposes Richard Wagner‘s overture to “Tannhäuser” with ordinary sounds from both the public and private realm, including keyboards, mouse clicks, chugging sounds, telephones and white noise. The result is a multi-layered soundscape in which disparate elements - such as an elaborate score by Wagner and noise - clash.

In “Zugzwang,” as in Tieu‘s general artistic practice, themes of national historiography and the transnational migration of populations emerge. The abstracted image of a forest area where the artist crossed the border from the Czech Republic to Germany in 1992 has been engraved into large mirrored steel elements. Through her own subsequent naturalization process, the artist became familiar with methods of control and the pressure under which the enormous administrative apparatus puts individuals.

Another part of the installation comprises sounds, texts, sculptures, memorabilia and found objects that are exhibited in two oversized shelves in the centre, creating a site of instability and exposing the way governments of leading industrial nations have perverted the principle of “form follows function” in order to prevent civil disobedience against the bureaucratic apparatus even before it can arise.
The first catalogue of Sung Tieu‘s artistic work will be published by Haus der Kunst and Nottingham Contemporary in the context of her extensive and parallel solo exhibitions in Germany and the UK.

The exhibition and catalogue are generously supported by the Alfried Krupp von Bohlen und Halbach-Stiftung. Further support for the catalogue has been received from the Henry Moore Foundation and Emalin, London.
www.hausderkunst.de