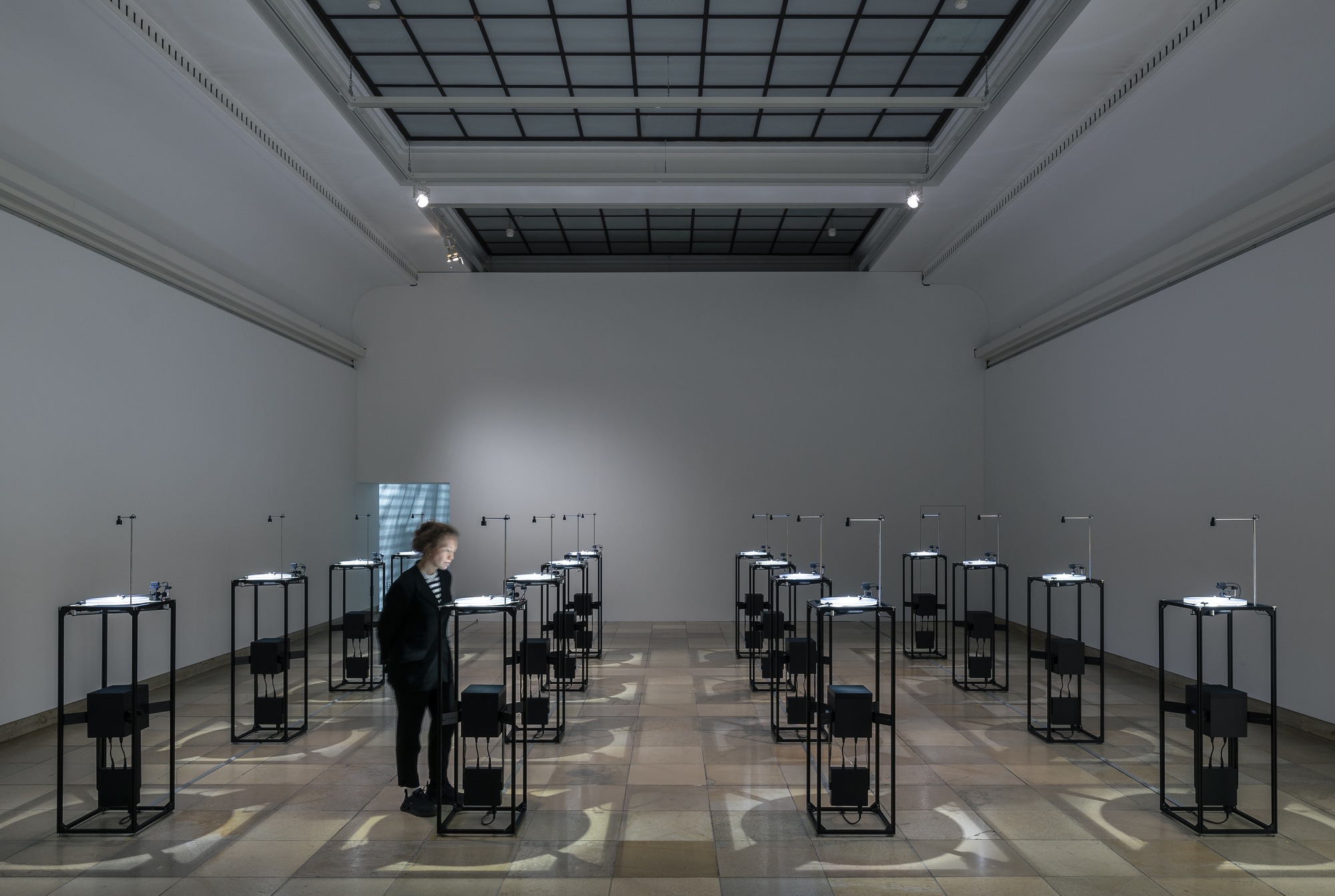 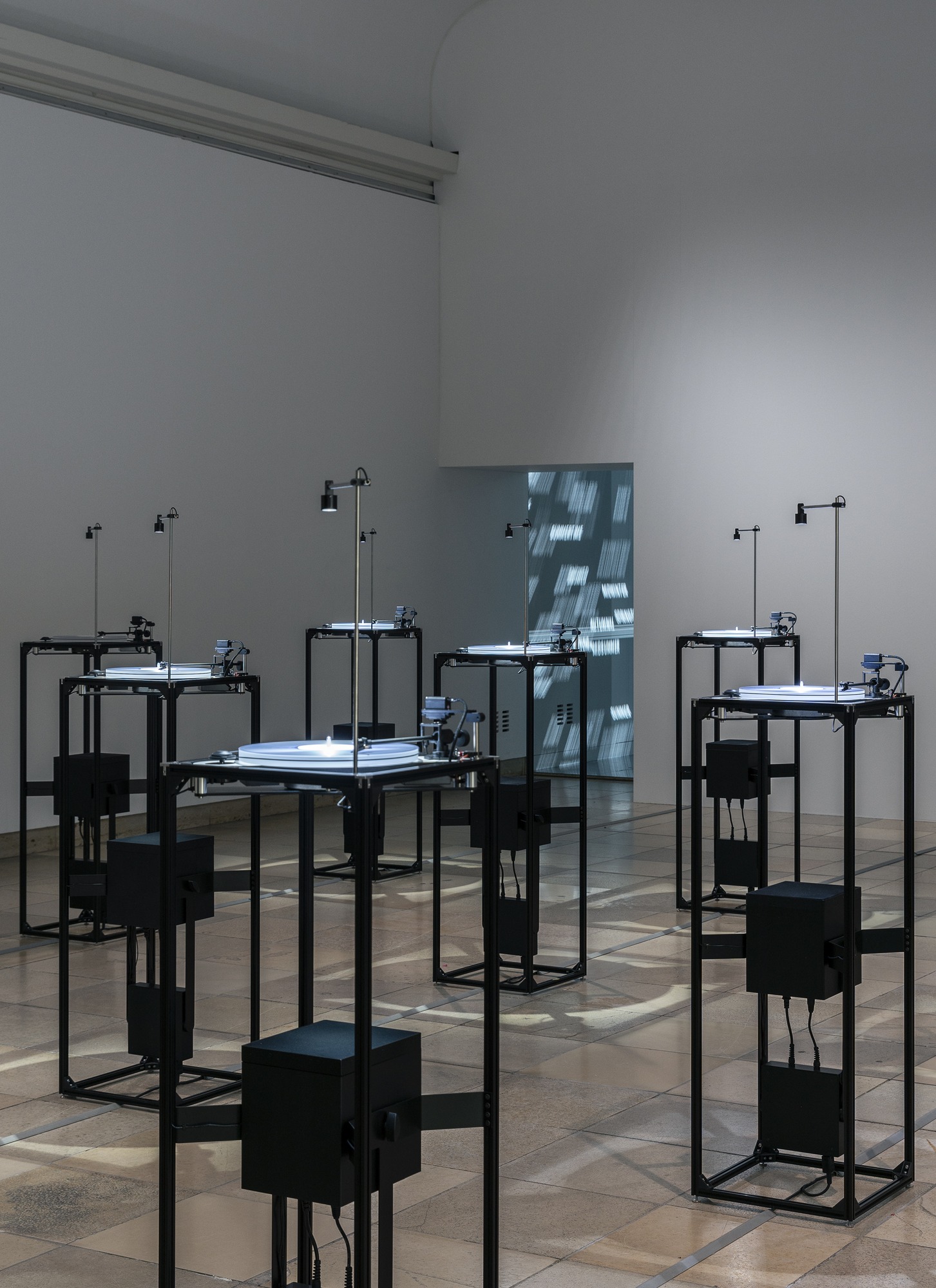 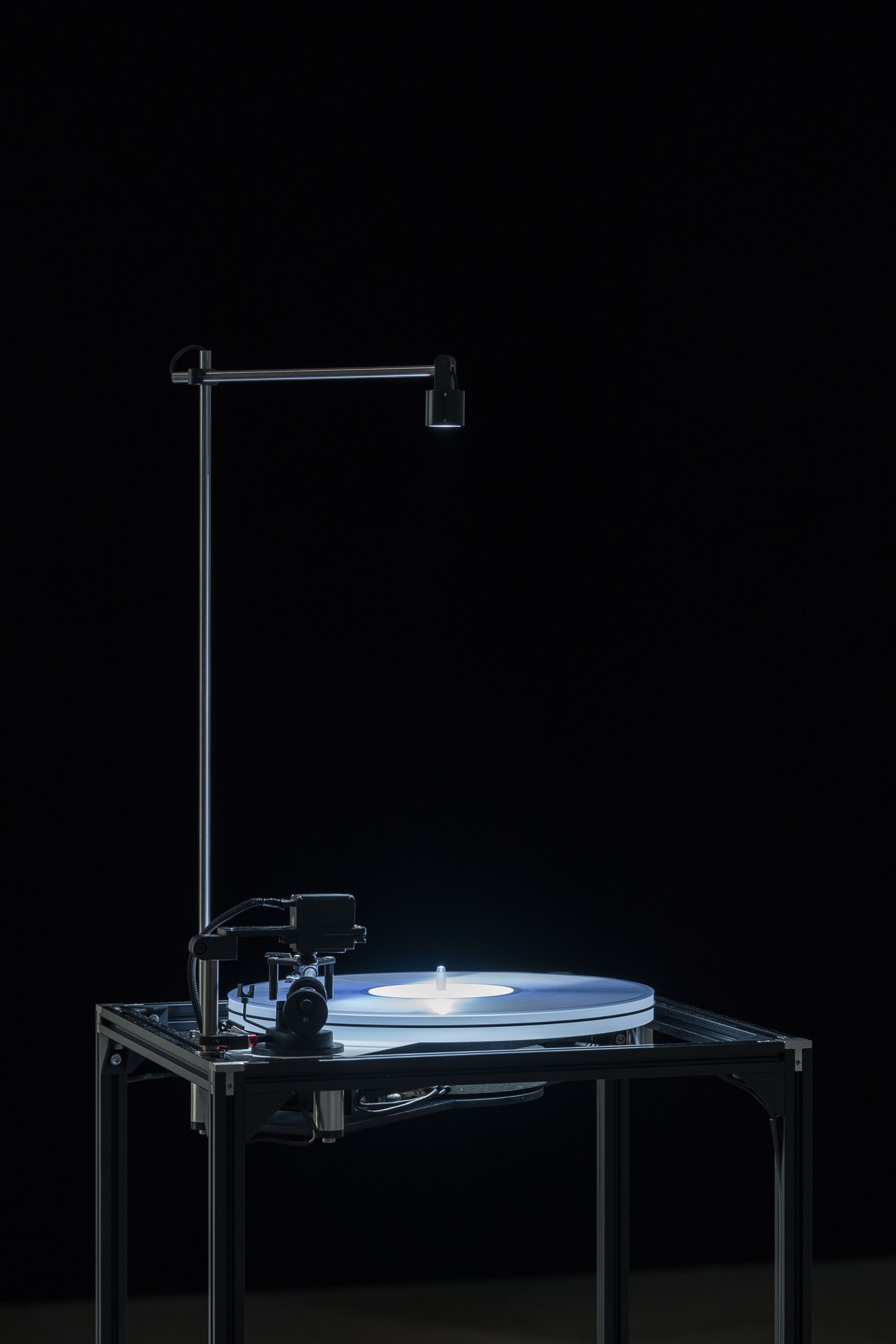 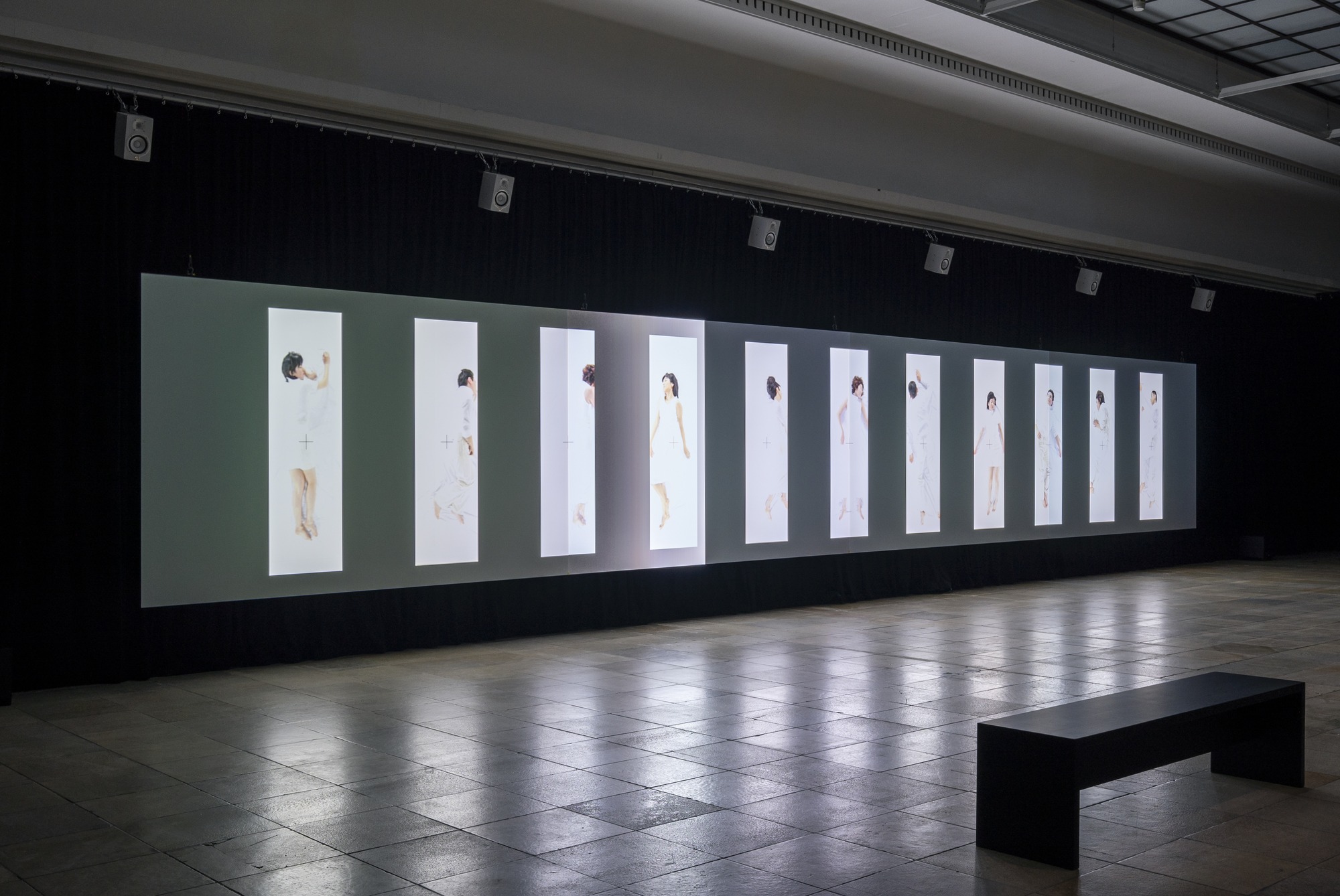 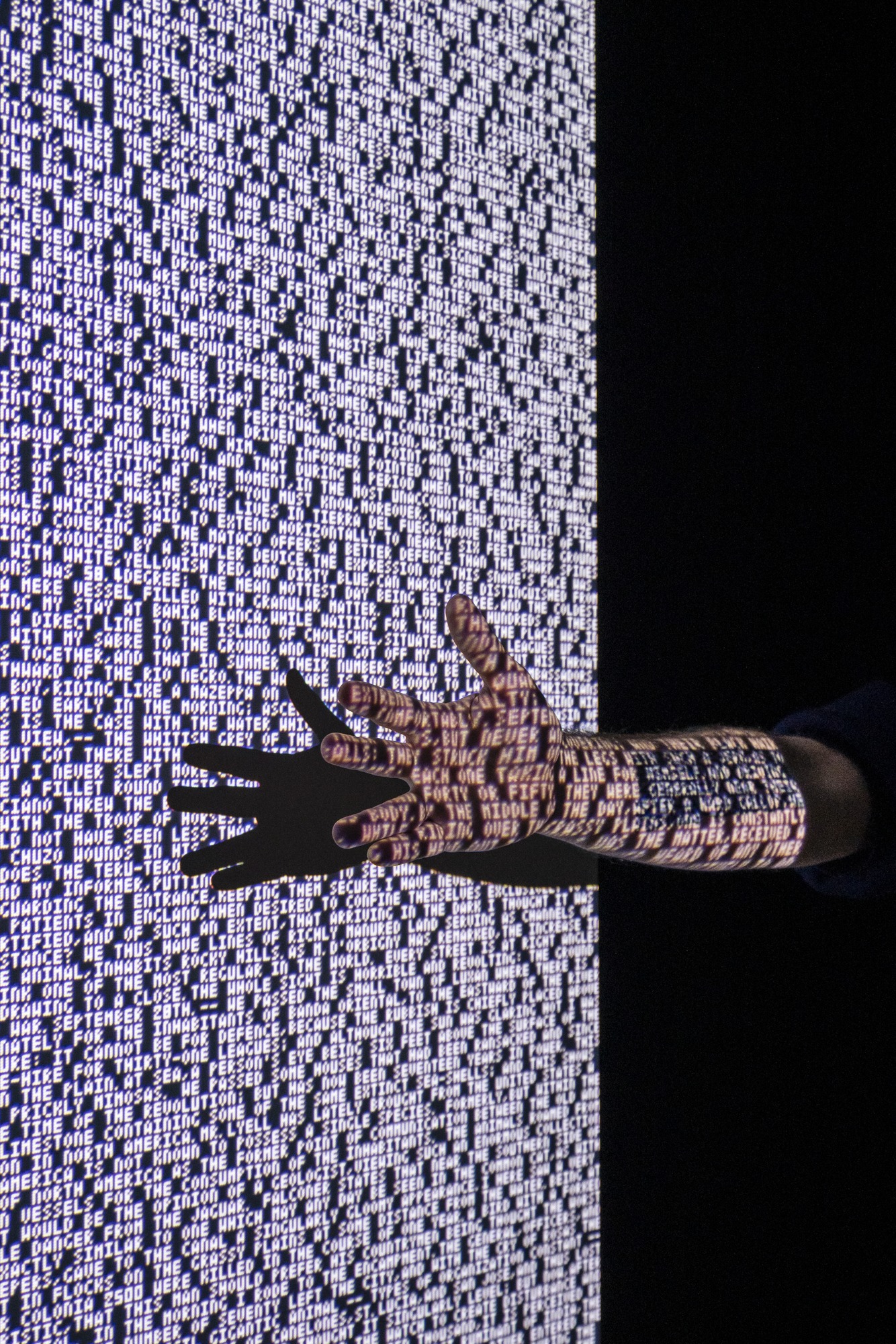 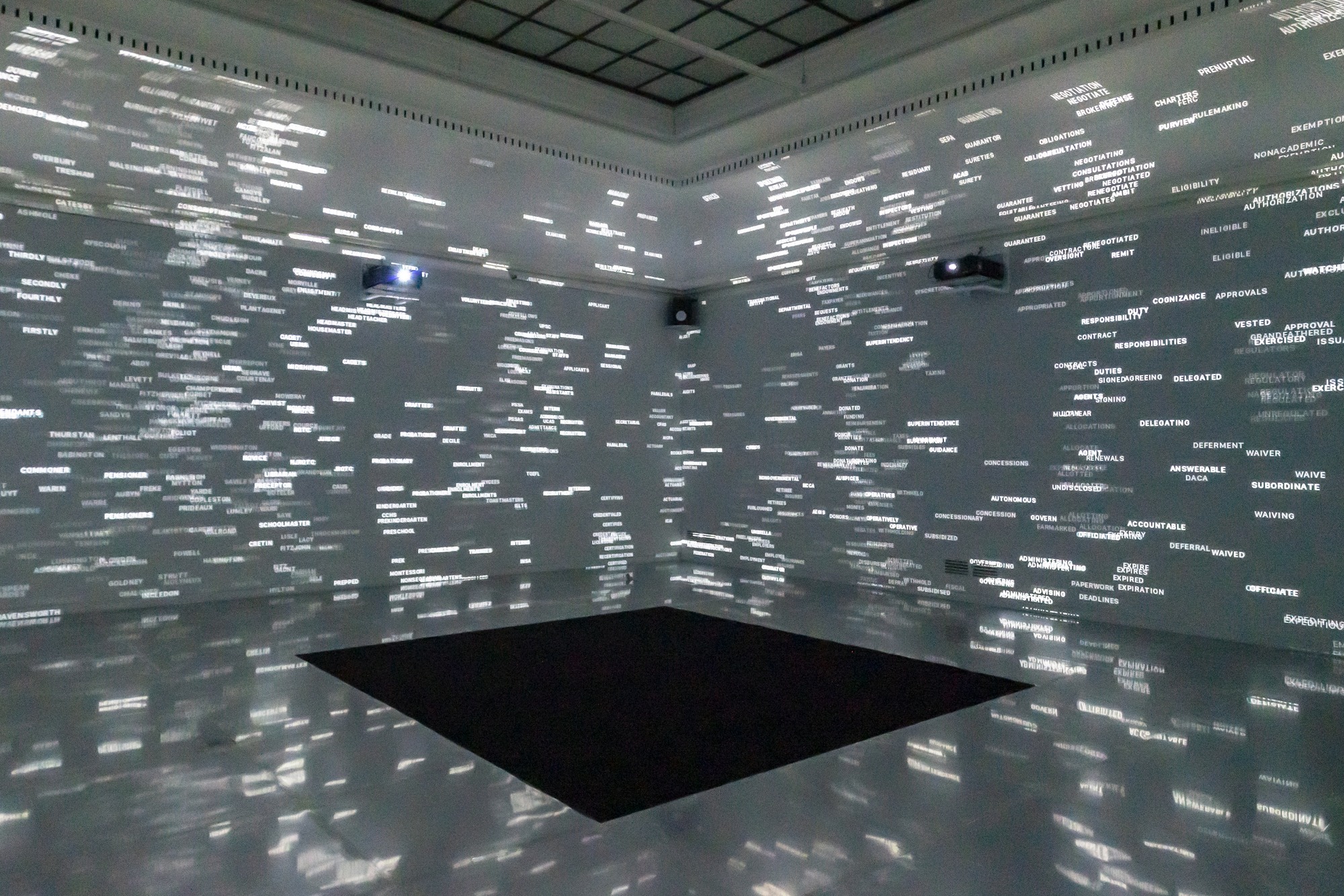 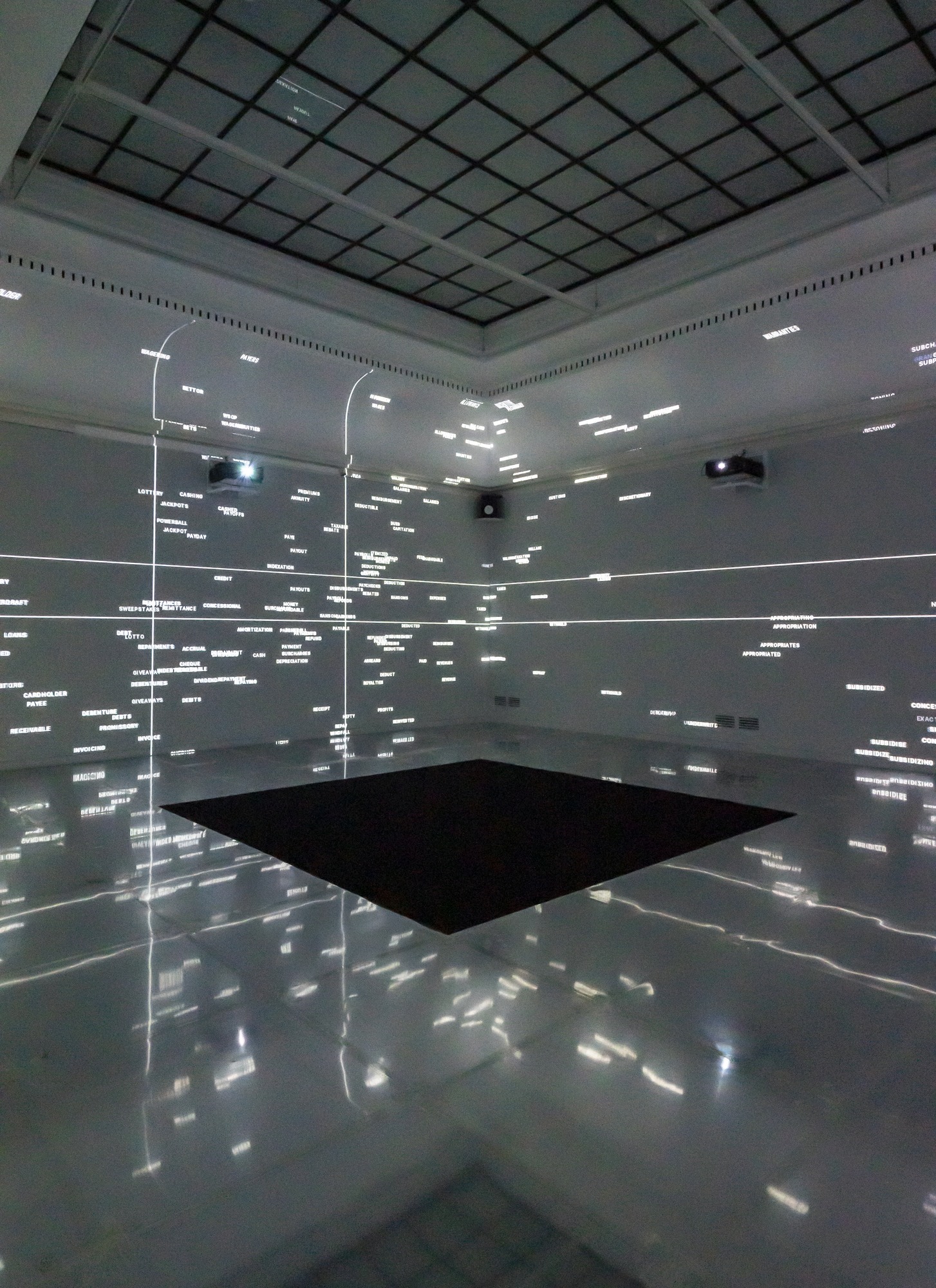 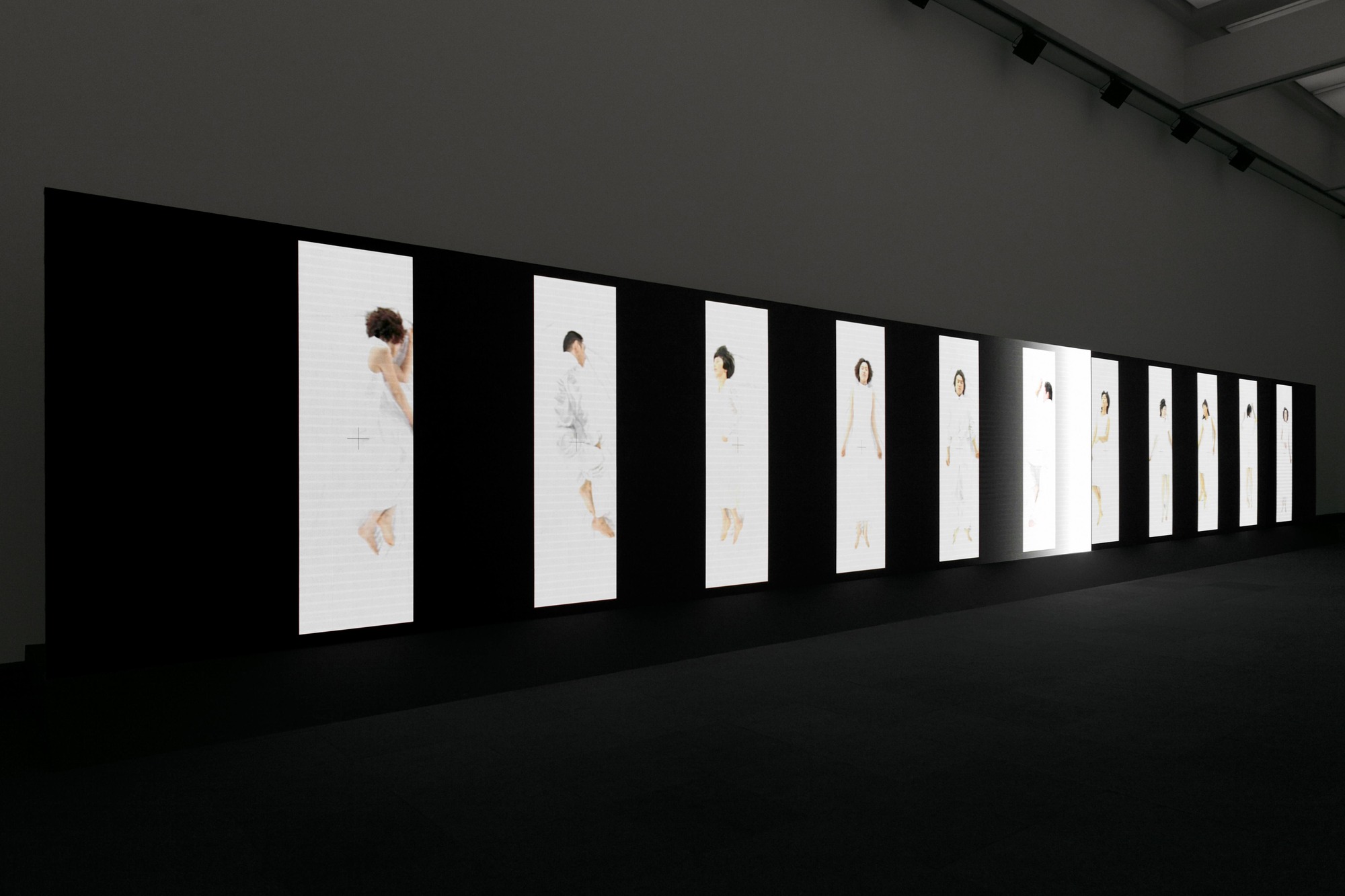 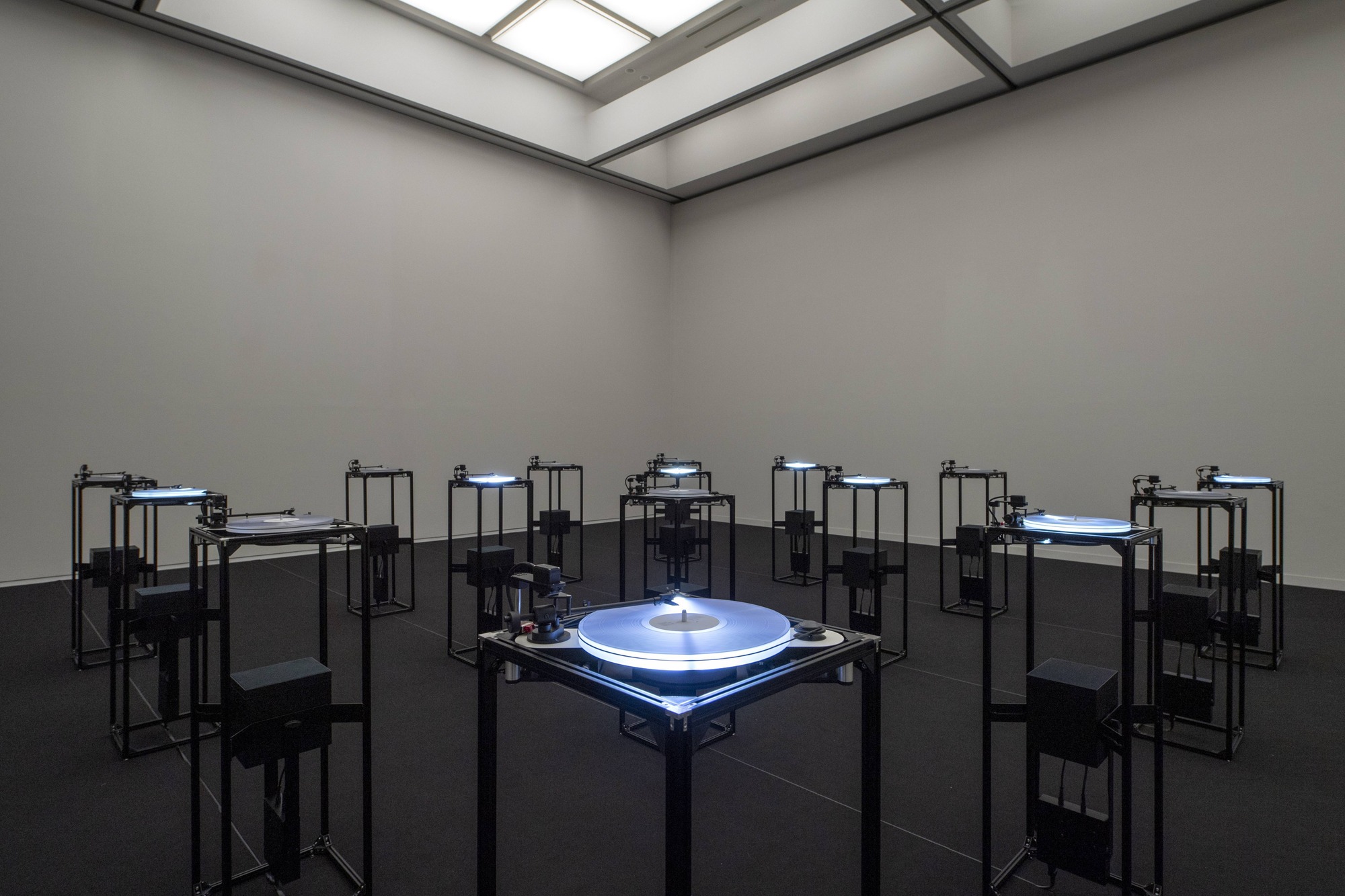 Dumb Type, Playback, 2018
Installation image from the exhibition “Dumb Type | Actions + Reflections” at the Museum of Contemporary Art Tokyo, 2019-20
Photo: Kazuo Fukunaga
Haus der Kunst is delighted to present a new site-specific exhibition by the Japanese collective Dumb Type. Founded in 1984 by students from Kyoto City University of Arts, Dumb Type's multifaceted installations and performances often deploy cyberpunk imagery in order to critique a highly "informatised" consumer society that is concurrently rendered passive or mute via the unceasing deluge of data and technological development: individuals who are 11overwhelmed with information yet unaware of anything" (Teiji Furuhashi) . Through this approach to communication - often working across multiple languages, speaking in gibberish or attempting to communicate indirectly via technology - Dumb Type have always pushed back against attempts at compartmentalisation; either with respect to the group's practitioners, or to their work across hitherto immutable categories such as those of nationality, gender or ableism.

At the centre of Dumb Type's expansive practice is an ongoing concern with the intersection of technological progress and the body. Drawing upon both the tradition of art collectives such as Jikken Kõbõ (1951-57), Gutai (1955-72), and Hi-Red Center (1963-64), as well as deploying the confronting strategies of Butoh or Angura theatre, Dumb Type's visionary performances and installations have been at the leading edge of debates concerning identity and sexual politics in Japan and the wider world; directly confronting audiences with taboo subjects such as identity formation, the pervasiveness of surveillance/communication technologies, or the trauma wrought by global health crises such as HIV/AIDS (an endemic which tragically claimed the life of one of their founders, Teiji Furuhashi, in 1995) .

Collaboration has always been a key element of Dumb Type's practice. Although the group's core normally comprises around five to ten artists, no two projects by Dumb Type have included the same participants, with some involving up to thirty artists. Over a hundred artists have now worked with Dumb Type in some capacity over the years, including the likes of Takamine Tadasu, Norico Sunayama, Takao Kawaguchi, Peter Golightly, Bubu de la Madeleine, the OK Girls, Ryoji Ikeda, Min Tanaka and most recently Ryuichi Sakamoto. Equally important is the dialogue and support which has existed between Dumb Type and the visionary Japanese sculptor Fujiko Nakaya, whose retrospective is shown simultaneously at Haus der Kunst. Nakaya was an early champion of Dumb Type's practice. Several of their earliest works were first exhibited at Video Gallery SCAN in Tokyo, which Nakaya founded in 1980, while Nakaya herself would often cite Dumb Type as one of the most exciting "next generation" collectives working at the intersection of art and technology.

The presentation itself is centred around three specially conceived installations. The huge, 16metre-wide LED video installation MEMORANDUM OR VOYAGE (2014) combines scenes from three of Dumb Type's most iconic performances - OR, memorandum, and Voyage - as well as the gallery installations which followed them. At the heart of the work lies the questions of knowledge and agency, and in particular, our ability as cognizant beings to be able to tell the difference between idealized and material truths, and how much technology ultimately dictates our ability to determine states of fantasy and reality, life and death. For example, the OR portion of the film shows images of the performers projected onto four sheets of glass, their movements dictated by a rhythmic sweep of light and a tone that recalls the beeping of a vital signs monitor; the device which determines whether a comatose patient is still alive. In contrast to this, the Voyage section features the entire text of Darwin's "The Voyage of the Beagle" (1839), overlaid with the route the ship as it circumnavigated the southern portion of the globe; which is in turn mirrored by an expanse of vertical scan lines at the base of the projection, indicating uncharted territory. Finally, the memorandum section sees the same performers revisiting the work fifteen years later, invoking an additional layer of recall with respect to a performance who premise circulated around the inherent instability of memory and consciousness.

Time and its discontinuity is also a constituent factor in the room-size installation Trace/React Il (2020). Using an Al bot programmed to search for words related to the fundamental concepts of "Love", "Sex", "Death", "Money", and "Life", the resulting installation completely immerses the viewer in a disconcerting swirl of words whose relationship to one another seems tenuous at best. This feeling of being unmoored from one's bearings is further enhanced by the mirrored floor (a relic from Dumb Type performance Voyage), as well as an ominous dark patch in the very centre - a reference to the hole in the centre of the stage for their most recent performance 2020. The disorientation and play of being cast adrift amidst the seemingly incessant flow of language serves further to reinforce the increasingly expendable nature of human agency within the generation and promulgation of information and meaning; posing questions as to our ability to decipher reality in a world which is increasingly being shaped by digital and artificial "intelligences".

Finally, the sound sculpture Playback (1989-2022) is an evolving installation whose sonic form perpetually responds to the time and place in which it is exhibited. Based on Dumb Type's paradigmatic 1988 performance Pleasure Life, Playback has undergone many manifestations since it was first exhibited in 1989. Whereas previous iterations have generated an immersive symphony of sounds based upon a range of found recordings - including a selection of early Dumb Type musical compositions; or the multi-language greetings that were launched into space as part of the Voyager probe in 1977 - the current iteration created for Haus der Kunst features a unique soundscape specially created by Ryüichi Sakamoto. Working closely together with Dumb Type, Sakamoto commissioned people from sixteen cities throughout the world to take field recordings of their urban surroundings. Based on these recordings, Sakamoto and Dumb Type have crafted a composition that - in light of our collective experience of the past couple of years - transforms the gallery into an ever-evolving musing on the concepts of memory and association; distance and desire. In a further nod towards creating connections across times and geographies, these field recordings also form part of the installation 2022, Dumb Type's contribution to the Japan Pavilion as part of the concurrent La Biennale di Venezia.

Taken as a whole, all three of these installations can be seen to critically interrogate the manner in which digital media and technology now constitute a formative and irrevocable part of lived experience. Conflating the past with the future, yearning with despair, the exhibition compels viewers to engage in alternating acts of attentive listening, reading and watching. In so doing, the presentation recalls the state of liminality ("ma" in Japanese), a state of inertia or nothingness that is principally derived from a surfeit of meaning. This has been central to many practices that interrogate the effects of digital technology and human consciousness.

A catalogue of the exhibition will be published in June by Verlag für Moderne Kunst.