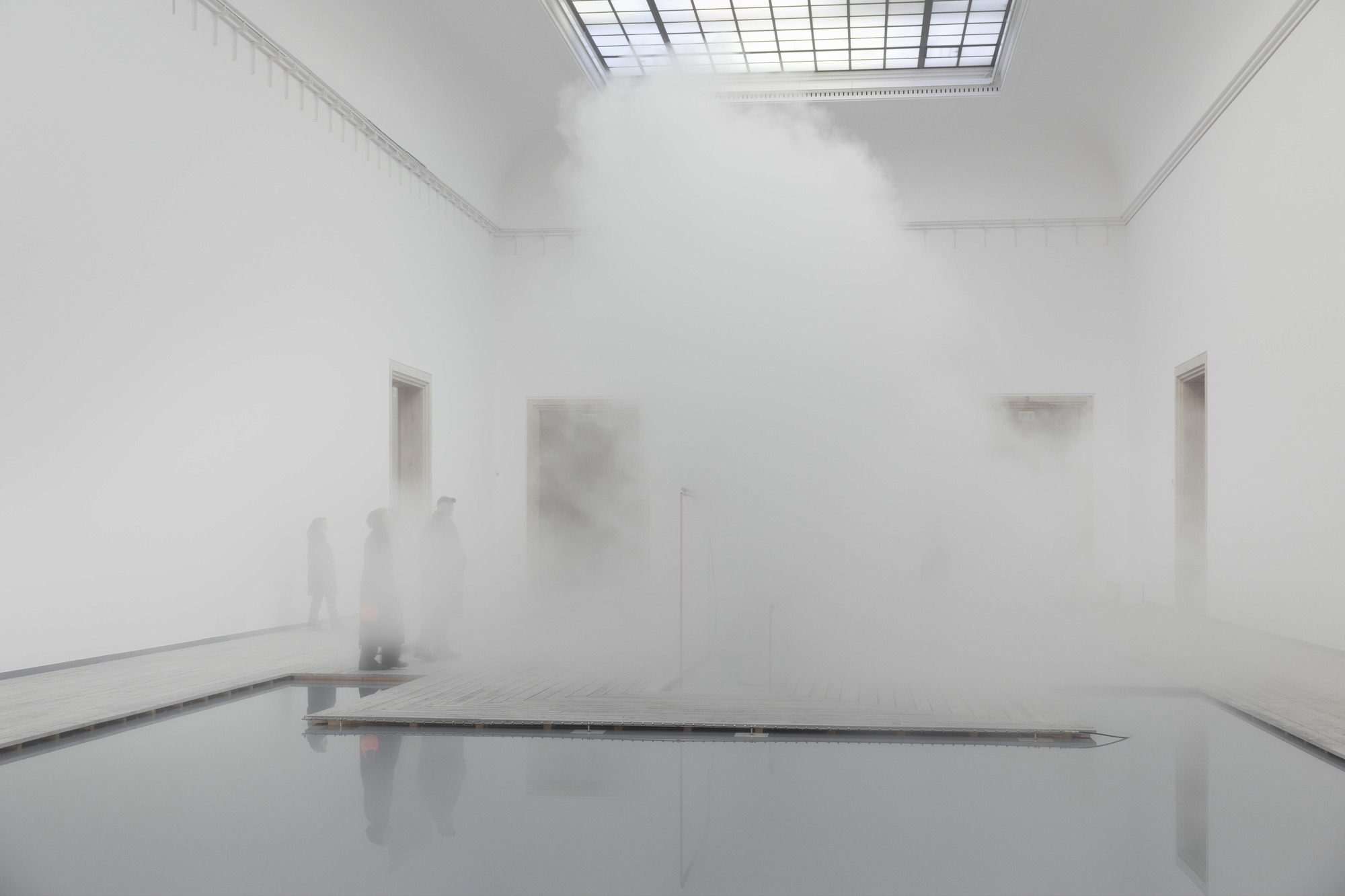 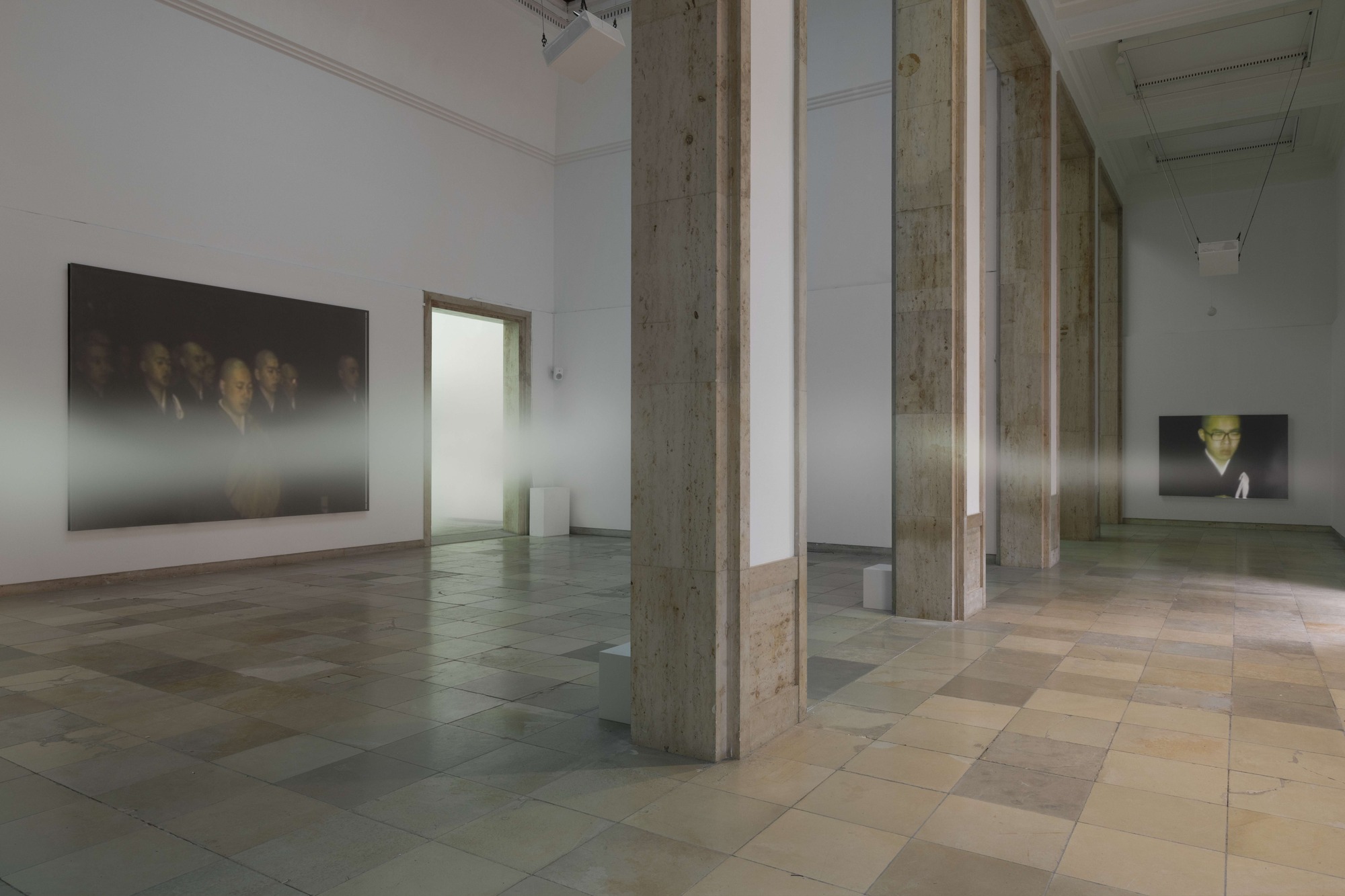 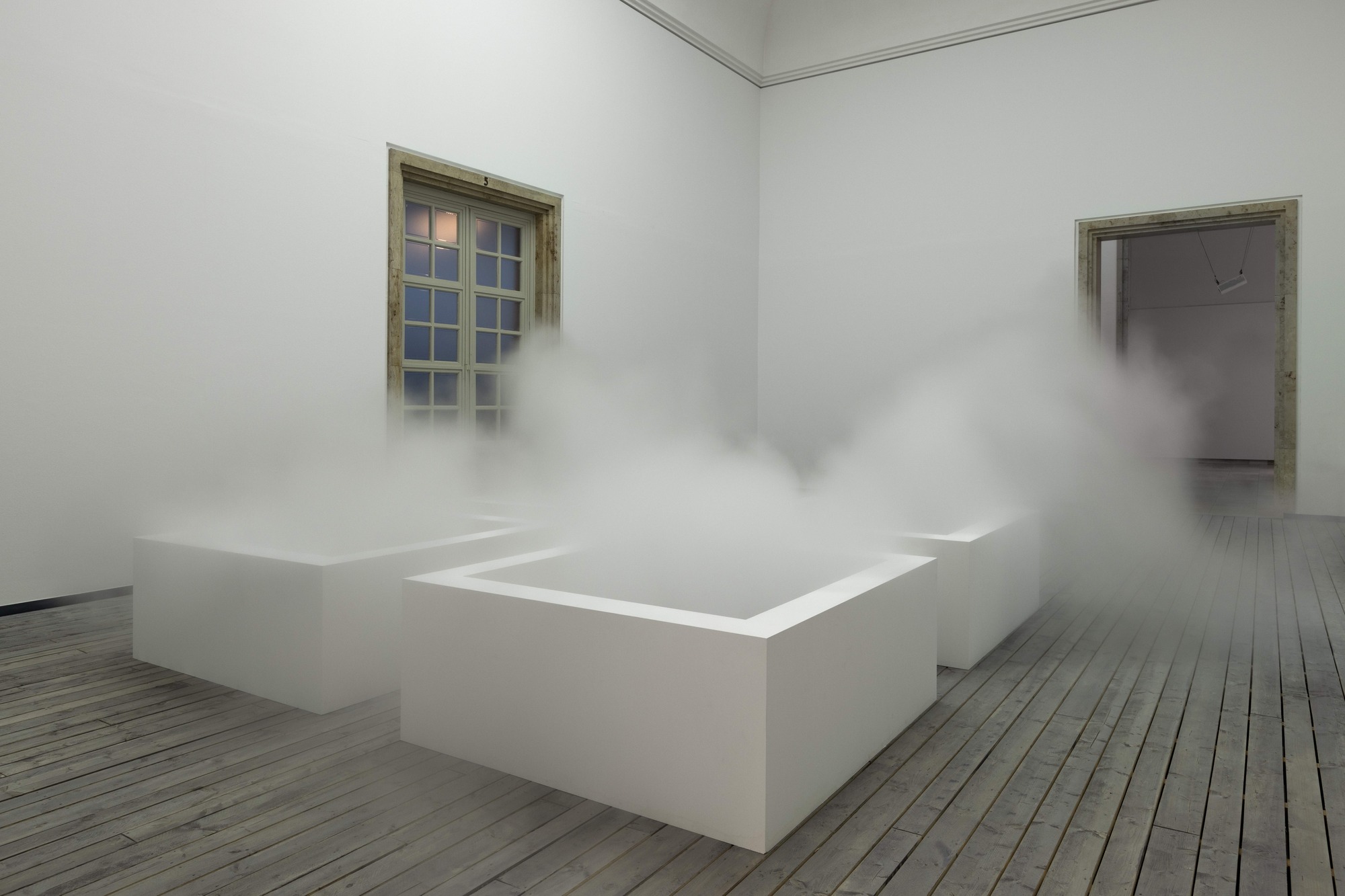 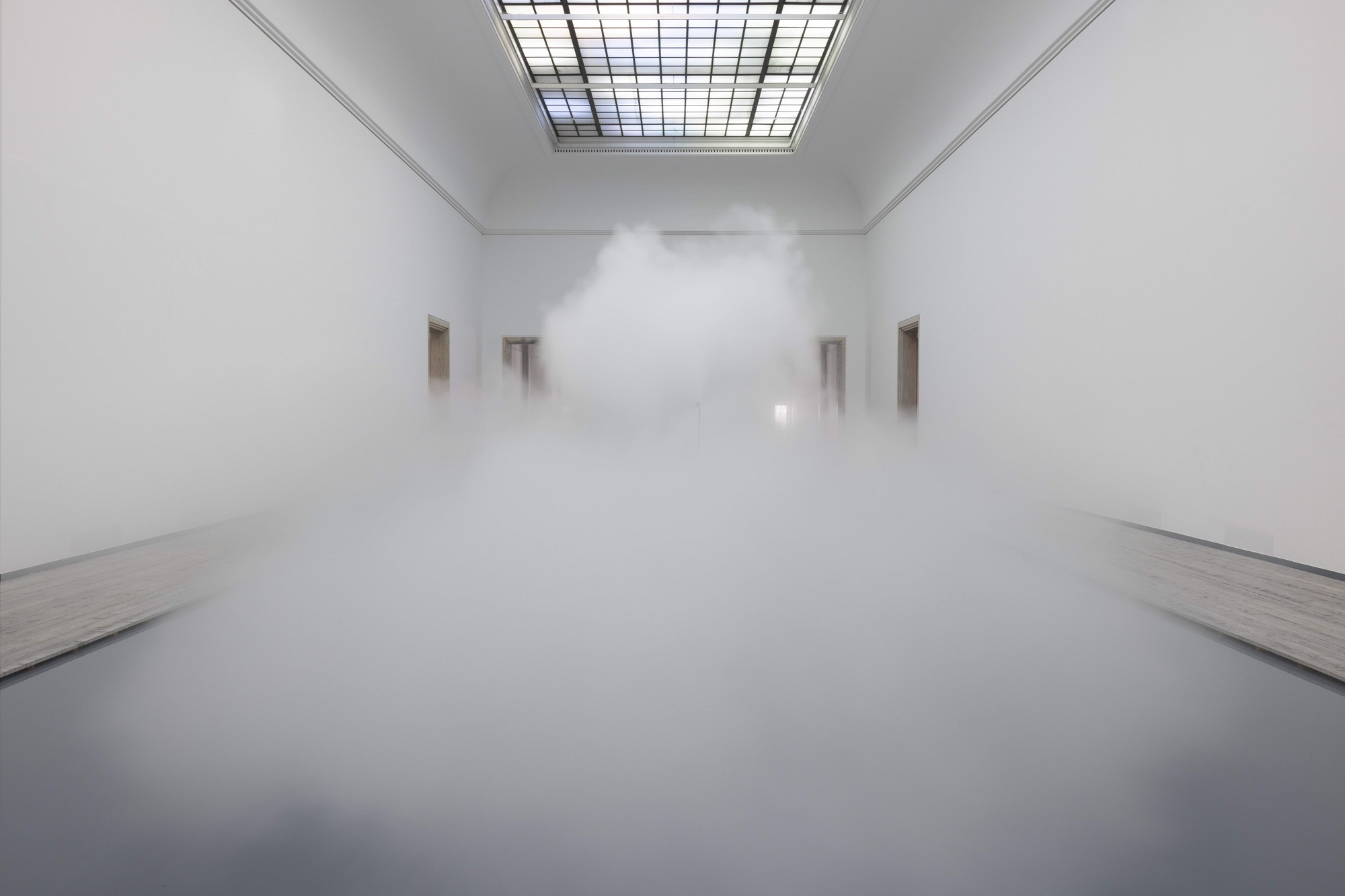 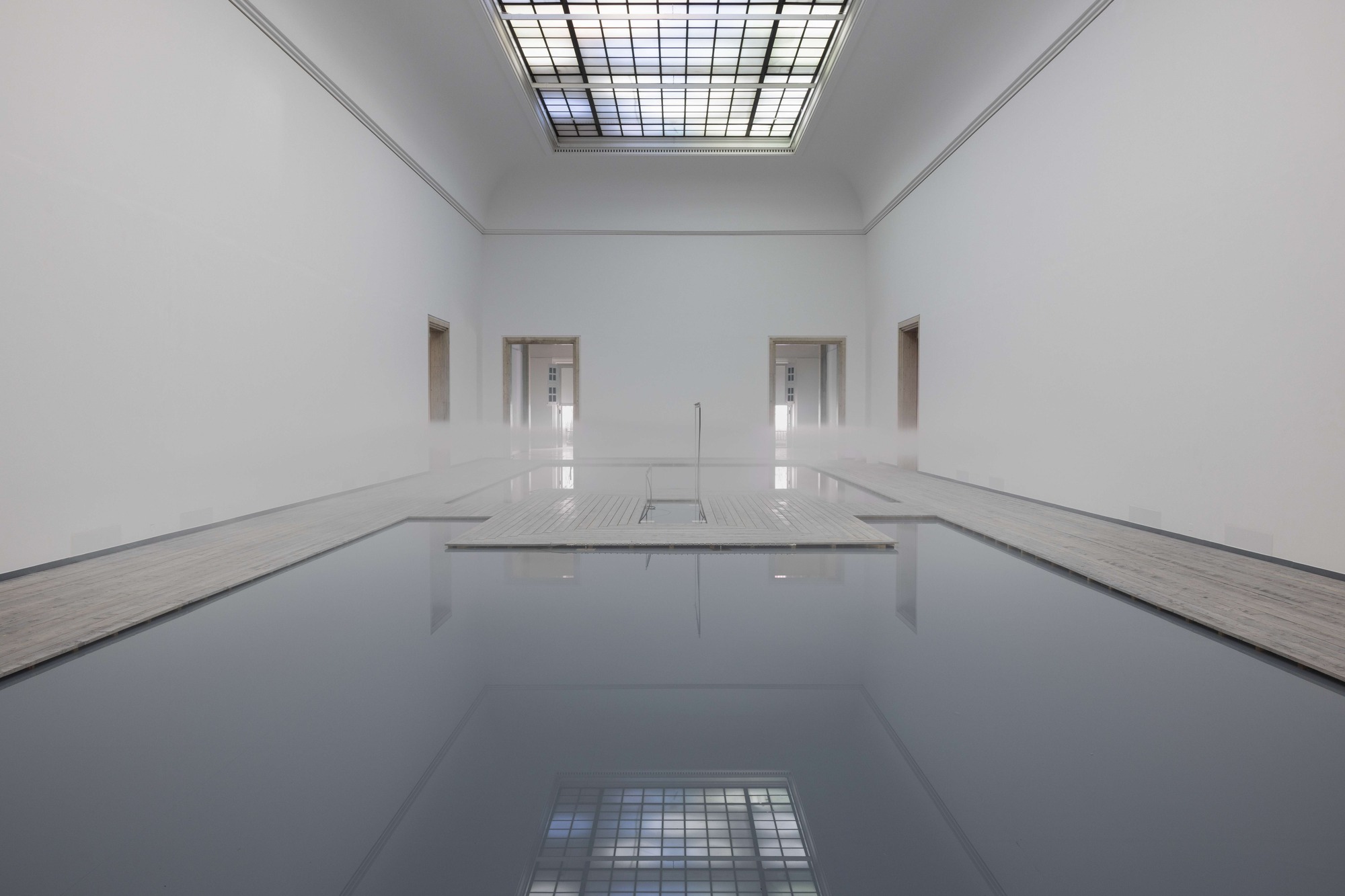 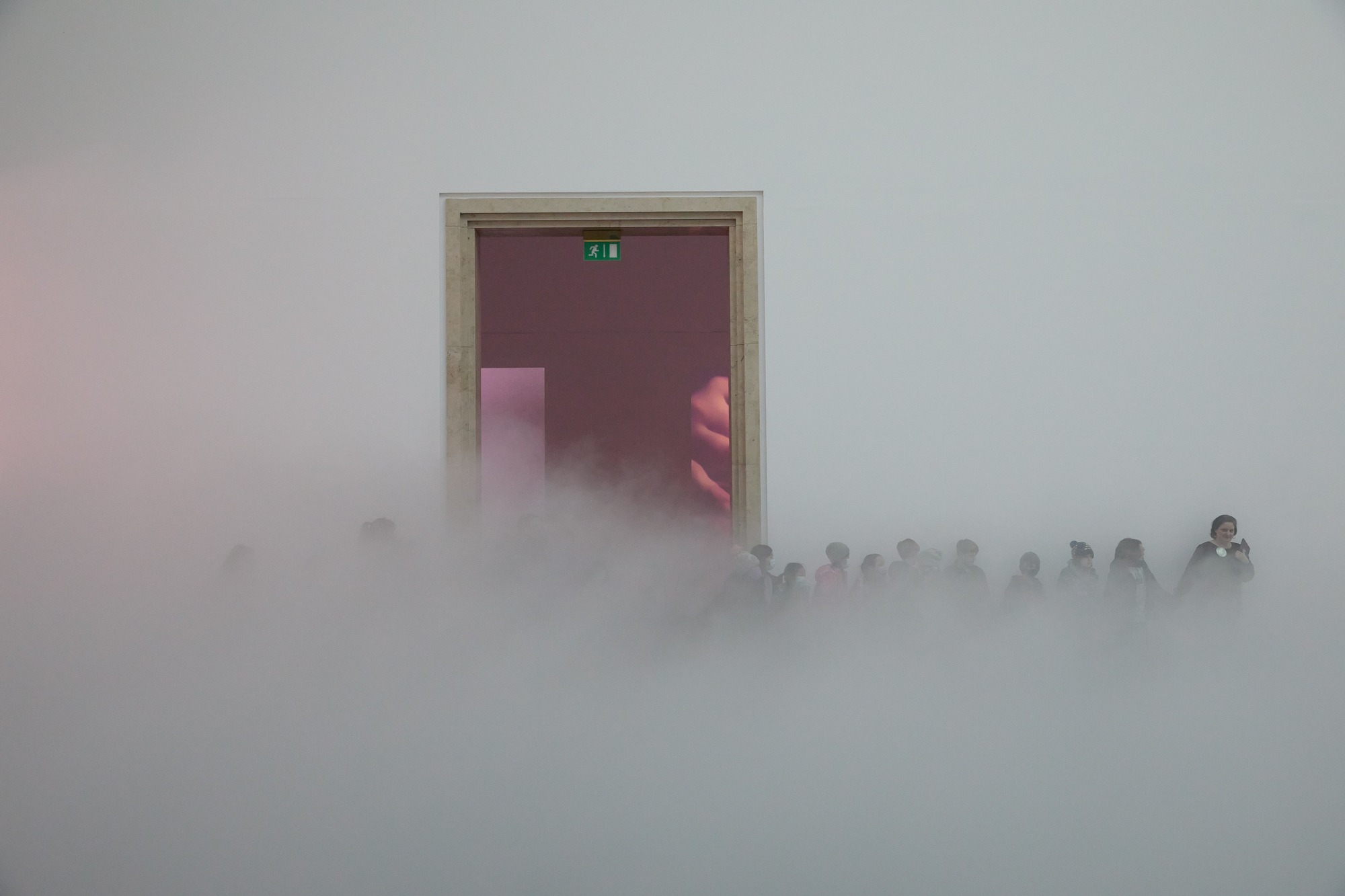 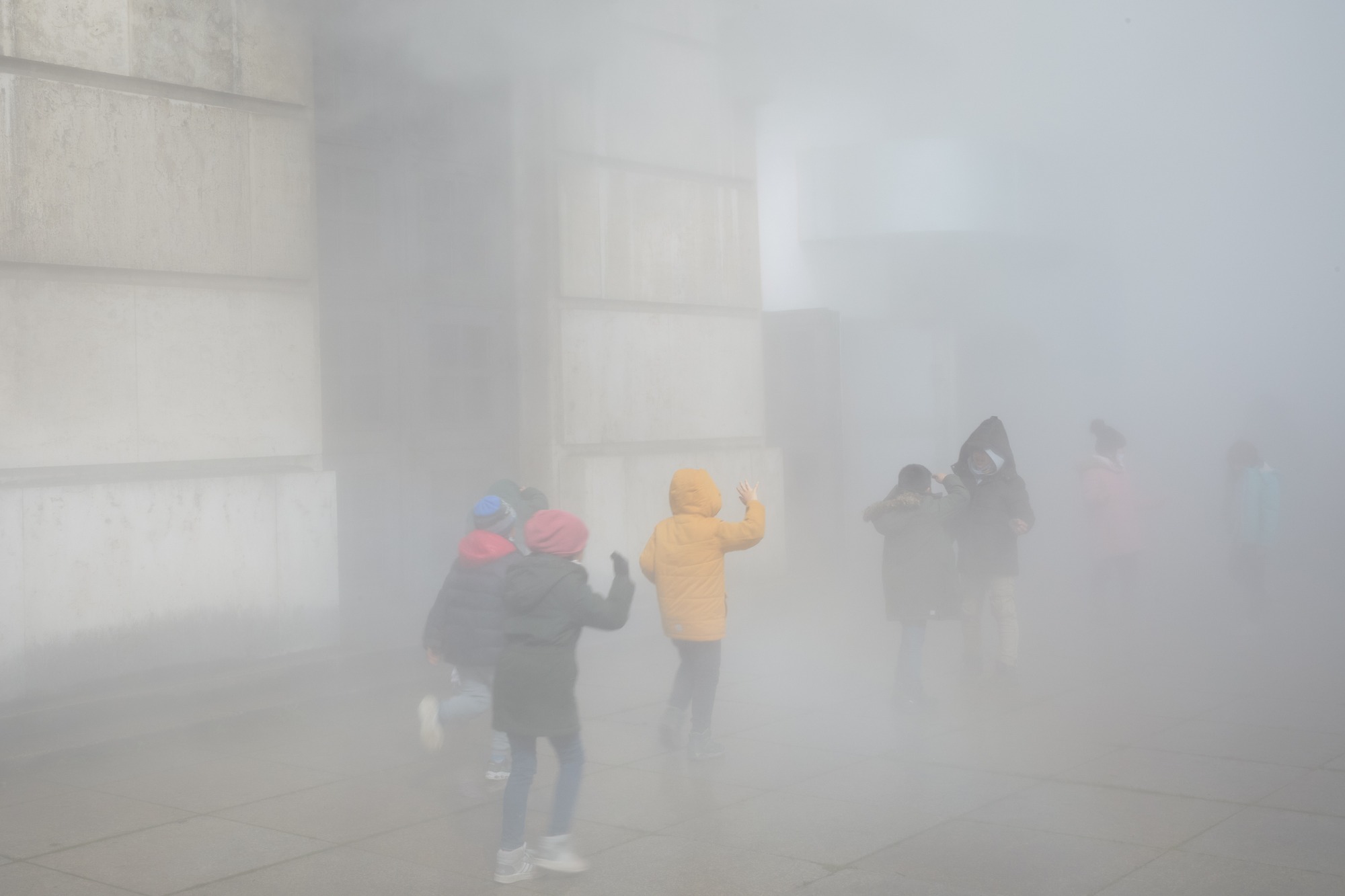 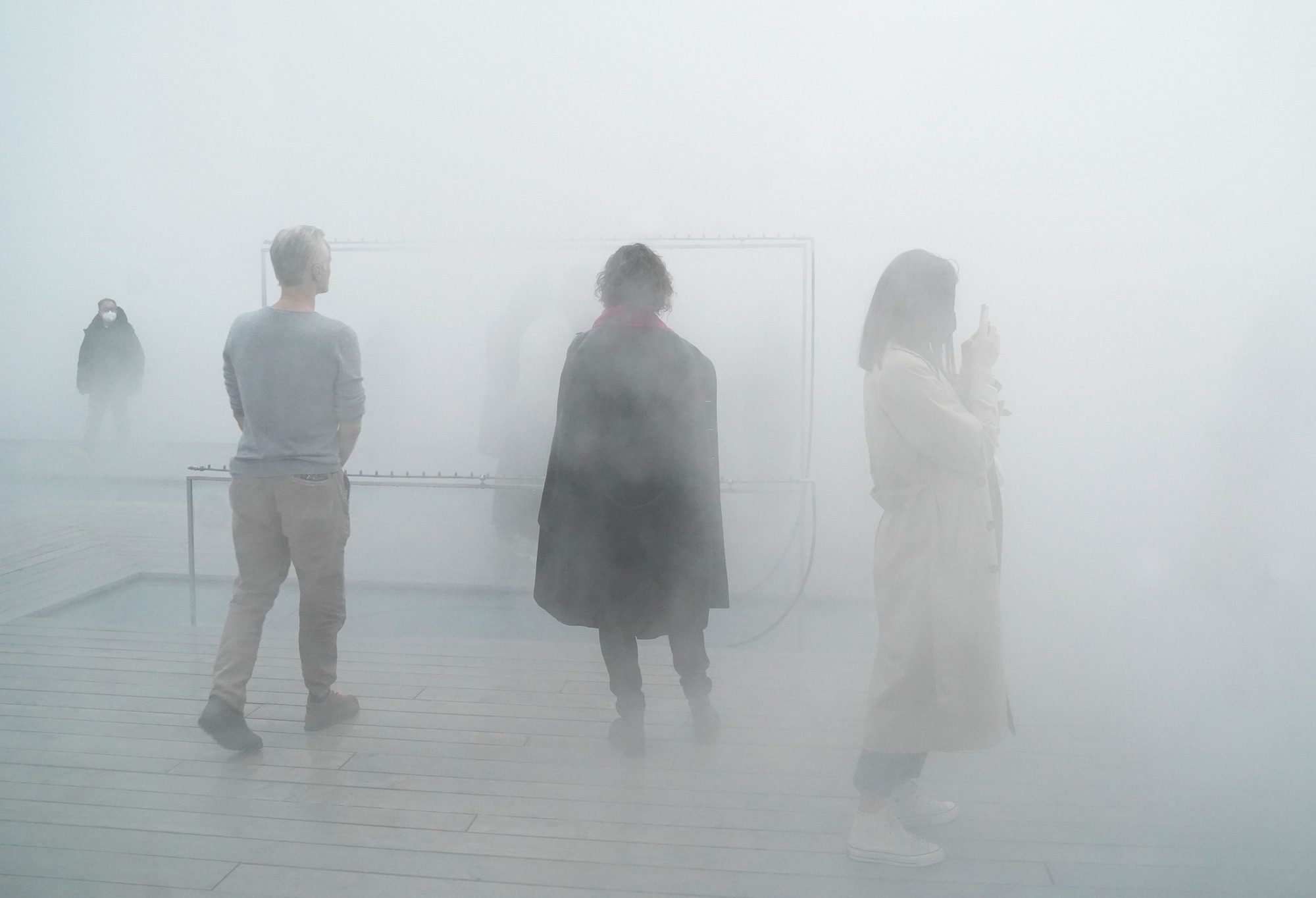 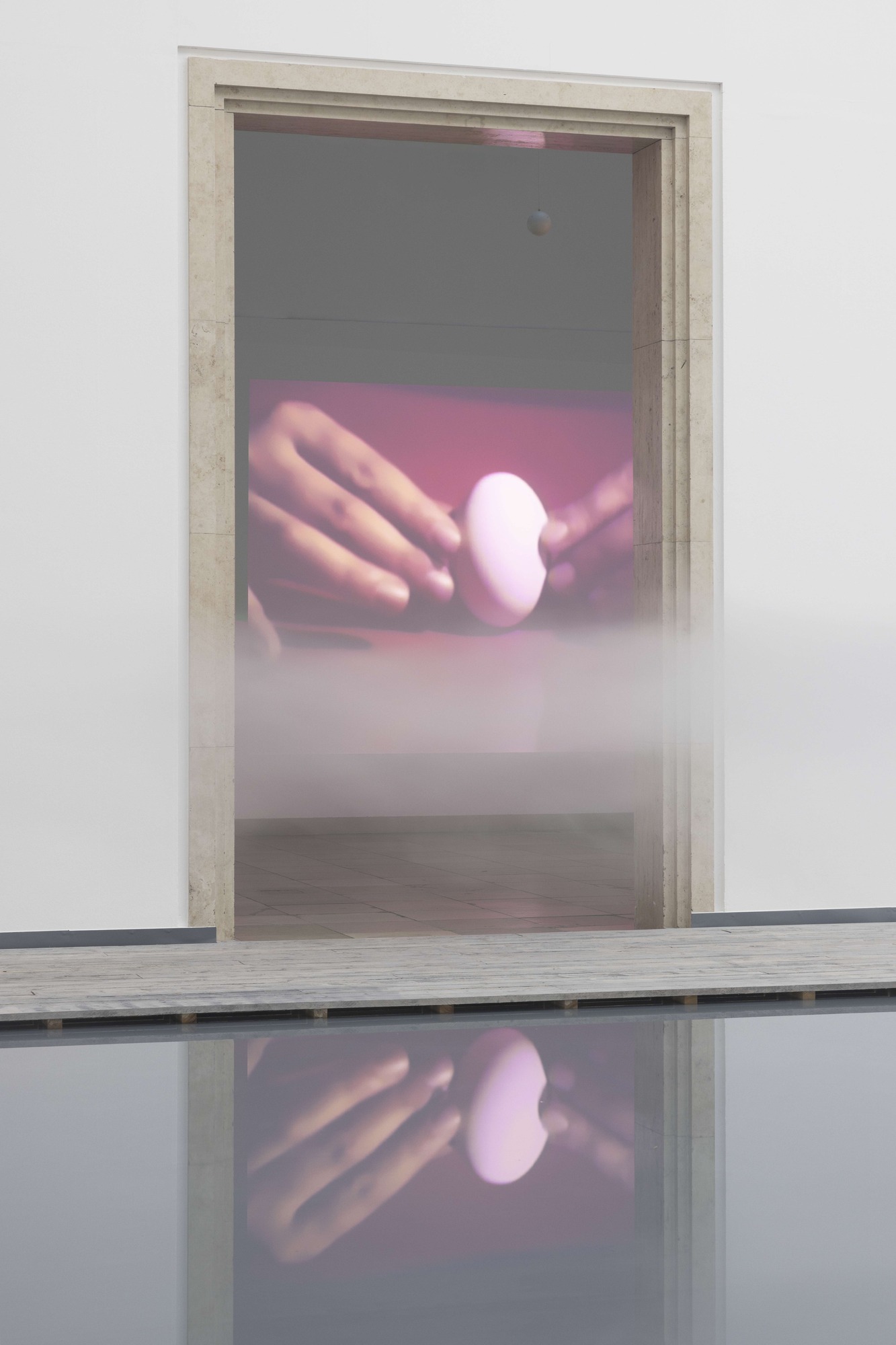 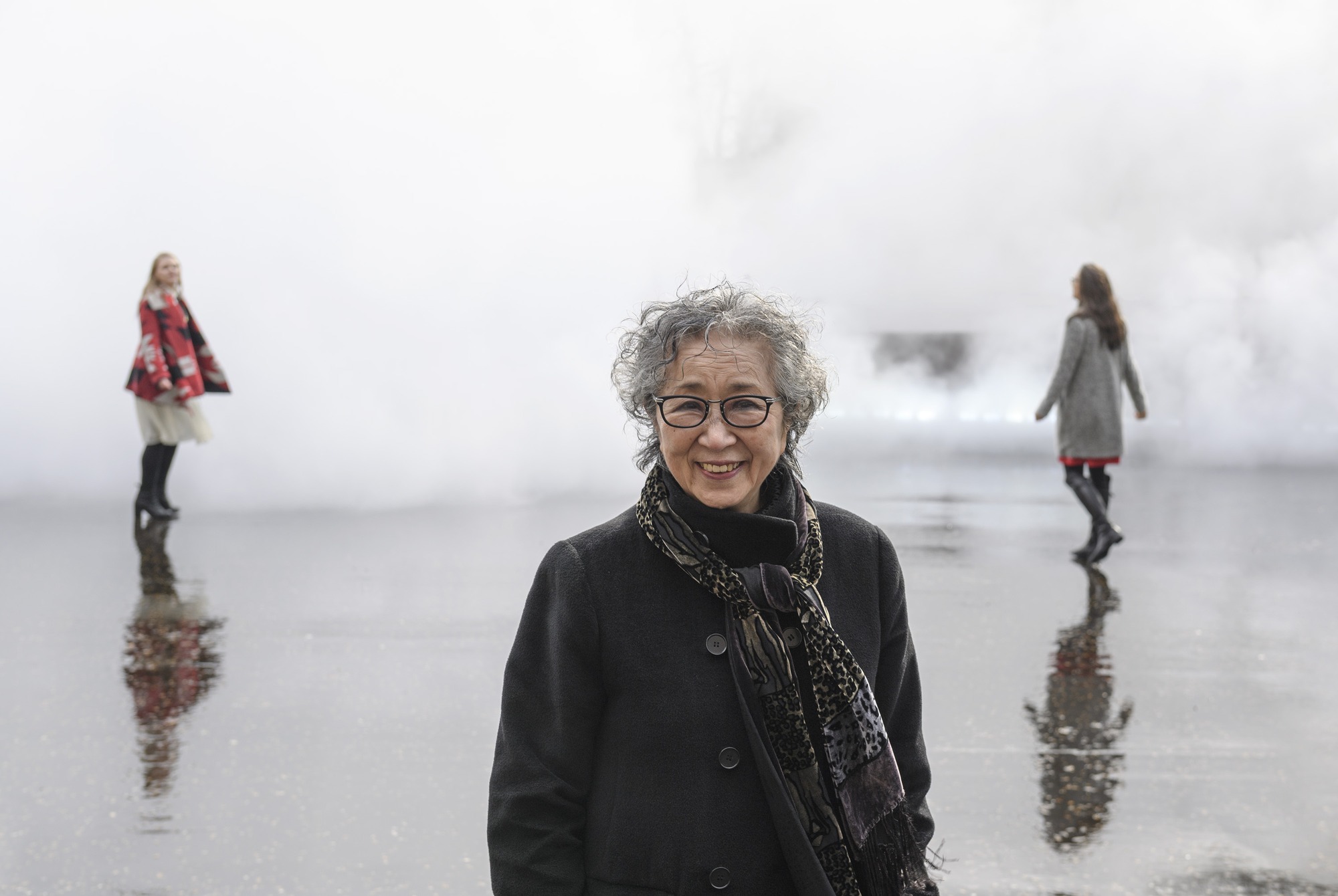 Fujiko Nakaya's fog sculptures are made entirely of water. They challenge traditional notions of sculpture as they change at every moment depending on temperature, wind and atmosphere.

“Fujiko Nakaya. Nebel Leben” is the first comprehensive survey exhibition of the visionary sculptor Fujiko Nakaya (b.1933, Sapporo, Japan) outside of Japan. Gaining prominence in the 1960s as a member of the New York-based collective Experiments in Arts and Technology (E.A.T.), she became internationally renowned for her immersive fog artworks, which defied traditional conventions of sculpture by generating temporary, borderless transformations that physically engage with the public and give shape to the surrounding environment. Driven by early ecological concerns, Nakaya’s work deals with water and air, mediums that have particular resonance in the face of the climate crisis. From the artist’s early paintings to her fog sculptures, single-channel videos, installations and documentation that reveal Nakaya’s cultural and social references, this experiential exhibition will offer an in-depth survey of one of Japan’s foremost artists.

The outside sculpture Munich Fog (Fogfall) #10865/II on the eastside of Haus der Kunst as well as Munich Fog (Wave), #10865/I are a new pieces created for Haus der Kunst; conceived of as a performance in which fog, the space, and the public participate. Nakaya introduces water as both a sculptural element and a metaphor for endless temporal processes to link material realities and media-generated illusions. Her cross-disciplinary approach also becomes evident in the titles of her fog works: the sequence of numbers designates the nearest weather station, whose data informs the preparatory planning of each work.

An entire room situates Nakaya’s work in a multiverse of historical events. It is dedicated to her early environmental awareness and the development of her work integrating aspects of both East Asian and Western art movements. The upstairs gallery provides further contextualisation and presents a selection of educational science films produced by Iwanami, a production company founded by the artist’s father, the physicist Ukichiro Nakaya. Alongside the artist’s early paintings and sketches, the room features documents from his research that has significantly influenced Fujiko Nakaya’s approach to the world, its matter and its mediation.

Nakaya’s paintings and drawings are proof of a transformed way of seeing, informed by observation, which the artist describes as the underlying principle of both art and science. Akin to abstract landscapes, they trace the artist’s interest in cyclical processes of decay and renewal. The painted clouds and biomorphic forms constitute an essential link to Nakaya’s moving image practice and her fog sculptures.

The detailed observation of natural phenomena and seemingly small, everyday gestures plays a central role in Fujiko Nakaya’s oeuvre. Her videos often feature real-time recording and resemble experiments which challenge the patterns of perception. Nakaya used video as a means of subjective analytical documentation and direct communication. In addition to her video sculptures and installations the artist engaged in so-called “communication projects” in which she interviewed and documented local communities. In 1980, she co-founded the artist collective Video Hiroba and opened SCAN, the first gallery for video in Japan.

Fujiko Nakaya is a game-changing artist whose practice not only is driven by early ecological concerns, but also stands out from the acknowledged trajectories of both East Asian and Western sculpture. Her work resonates with the history of her country without being subsumed to the movements Gutai and Mono-Ha nor to the Euro-North American lineage of Anti-Form, Process Art and Post-Minimalism.

Blurring the borders of science, art, and technology, Fujiko Nakaya’s work invites us to rethink, by direct physical experience, human entanglement with the environment.