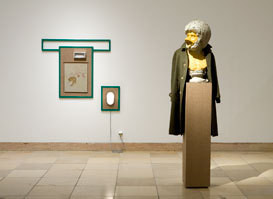 every day events occur that have the potential to become history. but who decides, which events are historically relevant? whose history is told, in which context and by whom? 'golden times' presents works by four contemporary artists, who consider 'history' as an unstable concept: as a construction made up from innumerable facets and fragments; as a question of interpretation, narration and fiction.
the sculptures by london artist steven claydon (*1969) are reminiscent of a traditional aesthetic found in memorials and monuments, whilst, at the same time, they seem to reference science fiction. they appear paradoxical – as if history and future had been brought together. at the centre of diango hernández's (*1970) art is the recent history of his native country cuba. he finds strong images for the processes of 'writing' history and how it is manifested in communist iconography and rhetoric. the swiss artist mai-thu perret (*1976) has been working on her project 'the crystal frontier' since 1998, the focus of which is a fictional women's commune with its – also fictional – history. the south korean artist sung hwan kim (*1975) employs the ancient tradition of story telling as a form of capturing history; at the same time, rumours, oral traditions or similar can also be considered a source for history. kim's presentation acts as a counterpoint in space and time to part 1 of 'golden times'.
www.hausderkunst.de