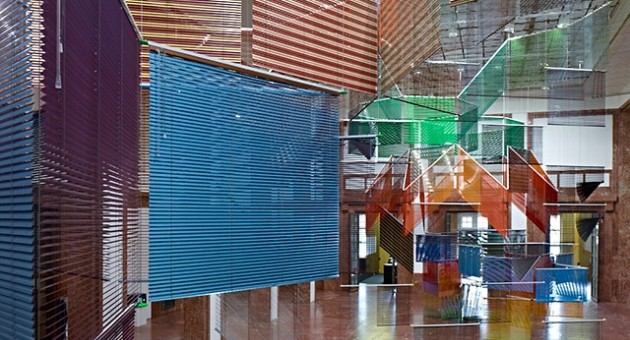 Haus der Kunst is pleased to announce that Haegue Yang is the inaugural artist for "Der Öffentlichkeit — Von den Freunden Haus der Kunst", an annual art commission conceived especially by the museum for the Middle Hall of the historic building with the support and collaboration of the Gesellschaft der Freunde. The first in this series of commissions of contemporary art, Haegue Yang's specially developed work was unveiled to the public on November 7, 2012.
Like Yang's dOCUMENTA 13 contribution, the installation consists of Venetian blinds suspended from the ceiling. These elements are structured in three autonomous, yet united parts: A massive towering structure, which is confrontationally located at the hall's entrance; a flat vertical grid wall, and a voluminous rectangle on top, which is gradually fragmented toward the floor. Depending on the angle of approach, the blinds overlap in a varying number of layers, and the interplay of light and shadow changes depending on the location. At times, the installation appears completely opaque, and at others, completely translucent. The installation's title "Accommodating the Epic Dispersion – On Non-cathartic Volume of Dispersion" itself occupies a significant amount of space and forms the counterpart to the multiple layers of blinds that sometimes hinder the unimpeded view into the hall. The title also alludes to Haegue Yang's inspirations, which lie in the literary processing of migration and diaspora. Born in Seoul, Korea, in 1971, Haegue Yang has lived in Germany since 1994 and is therefore well aware of the challenges faced by those living in a foreign country. The actions and decisions of authors and their characters with immigrant and post-colonial biographies allow the artist the possibility of comparison and identification, while inspiring her work, which also explores migration and uncertainty. Haegue Yang translates these issues into a spatial experience and introduces abstraction into the narrative: Walking through the installation, the visitor explores the relationship between space, dimensions, weight, and volume, where force and control are manifest, where they are weaker and even lost, and where they are recreated or being reconstructed. Haegue Yang has exhibited her works in major international institutions, including BAK/basis voor actuele kunst, Utrecht (2006), Portikus, Frankfurt (2008), Artsonje Center, Seoul (2010), New Museum, New York (2010), Kunsthaus Bregenz (2011), and Modern Art Oxford (2011). In 2009 she represented South Korea at the 53rd Venice and participated in dOCUMENTA (13), 2012. The commissioned work was developed specifically for Haus der Kunst's Middle Hall. Located at the heart of the building, the 800 square-meter hall is being imagined as an open and freely accessible public plaza. It is thus the natural place to commence the evaluation of the criteria surrounding discussions of public space, serving as the principal node of access to the entire contents of the museum. The Middle Hall is also a place where visitors can gather, sit and read, or simply linger.
The central gesture of its title "Der Öffentlichkeit — Von den Freunden Haus der Kunst" [To the Public - From the Friends of Haus der Kunst] is to animate a discussion on the norms and agendas of public dedication implicit in its subtitle. "Der Öffentlichkeit" proposes not only the idea of dedication, but also the prospect of acting in the public with the artwork as the central material around which public participation, discussion, debate, and exchange coalesces. Therefore, rather than take the norms of publicness as a fait accompli, each commission compels the museum audience to use the field of contemporary artistic practice to explore and examine what it means to act in the public realm, or alternatively how the concept of public access attaches to the space of the museum. The friends of Haus der Kunst have been supporting the institution for more than 50 years and will contribute to the new series with not only ideas and support, but also full funding.
www.hausderkunst.de