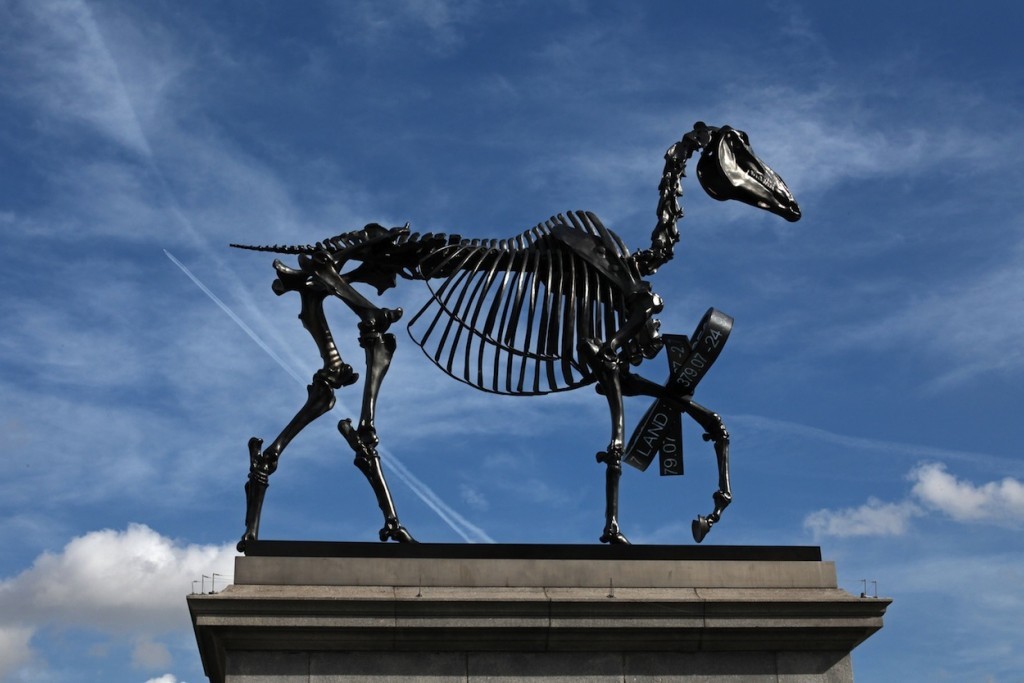 Haus der Kunst is proud to present Hans Haacke's celebrated monumental sculpture, Gift Horse (2015). Originally commissioned by the City of London as the tenth contribution for the "Fourth Plinth" on Trafalgar Square, the project opened amidst controversies surrounding the excesses of the City government and economic austerity during the financial crisis and is also linked to current social and political conditions across the world. In this way, Gift Horse could not be more timely.

Based on an etching by the English painter George Stubbs, Gift Horse is a bronze cast of an equine skeleton without a mount. An electric ribbon is fastened to the horse's front leg and broadcasts a live ticker of the London Stock Exchange, which in Munich will be substituted with live broadcasts from the Frankfurt Stock Exchange. Meticulously researched, the sculpture directly references the equestrian statue of William IV originally planned for the plinth and signifies the connection between wealth, power, and history.
According to Haacke, the genesis of his proposal was explore the relationship of the monument to representations of political:

"I was one of six artists invited to submit proposals for the Fourth Plinth on the northwest corner of Trafalgar Square. The plinth had been empty for more than 150 years. George IV, whose equestrian statue graces the plinth in the northeast corner, had spent so much money during his reign that there was not enough left for his successor, his younger brother William IV, to also get a ride on a bronze horse.

After scrapping several ideas, I thought it might be appropriate to allude to the custom of immortalizing rulers on horseback. (I am not the first of the Fourth Plinth artists to do that). Mine was to be a horse skeleton, adorned with a live decoration—and no rider.

Part of the proposal for the Fourth Plinth was the inclusion of an image of what it eventually would look like. Having no experience with horse skeletons—I believe I am not unique in this regard—I asked a librarian whether she knew of any relevant publications. She directed me to The Anatomy of the Horse by George Stubbs. I knew paintings by Stubbs of horses and the English horseback-riding gentry from visits to the Tate. But I had no idea that Stubbs, the son of a tanner, had personally dissected horses, and had published engravings of his findings in The Anatomy of the Horse. I then discovered that a portrait of Whistlejacket, a rearing Arabian horse—commissioned by its owner, Charles Watson-Wentworth, the second Marquess of Rockingham—was hanging in the center of a major gallery of the National Gallery, just behind Trafalgar Square. This Marquess was twice a Whig prime minister of England and, according to Wikipedia, 'exceptionally rich even by the standards of that wealthy group'. As for whether the Gift Horse is a memorial or a monument, if you like, you can take it as a tribute to the City, the Wall Street of London."
Following its successful presentation in London and based on discussions with Haacke, Haus der Kunst will present Gift Horse in the museum's monumental Middle Hall as a way to further develop a response to public representations of power that are common in many European public squares and buildings. This sculpture is especially of great interest in its link to contemporary representations of power, value, wealth, and political commemoration. As visitors enter the space of Haus der Kunst's Middle Hall, they will be brought in direct confrontation with Gift Horse, mounted on a monumental pedestal, as a response to the ceremonial and propagandistic nature of the former Ehrenhalle. The sculptural attributes of Haacke's incisive reflection on power offers a counterpoint to the monumental scale of the Middle Hall, especially within the context of the discussions surrounding the upcoming renovation of Haus der Kunst.
www.hausderkunst.de