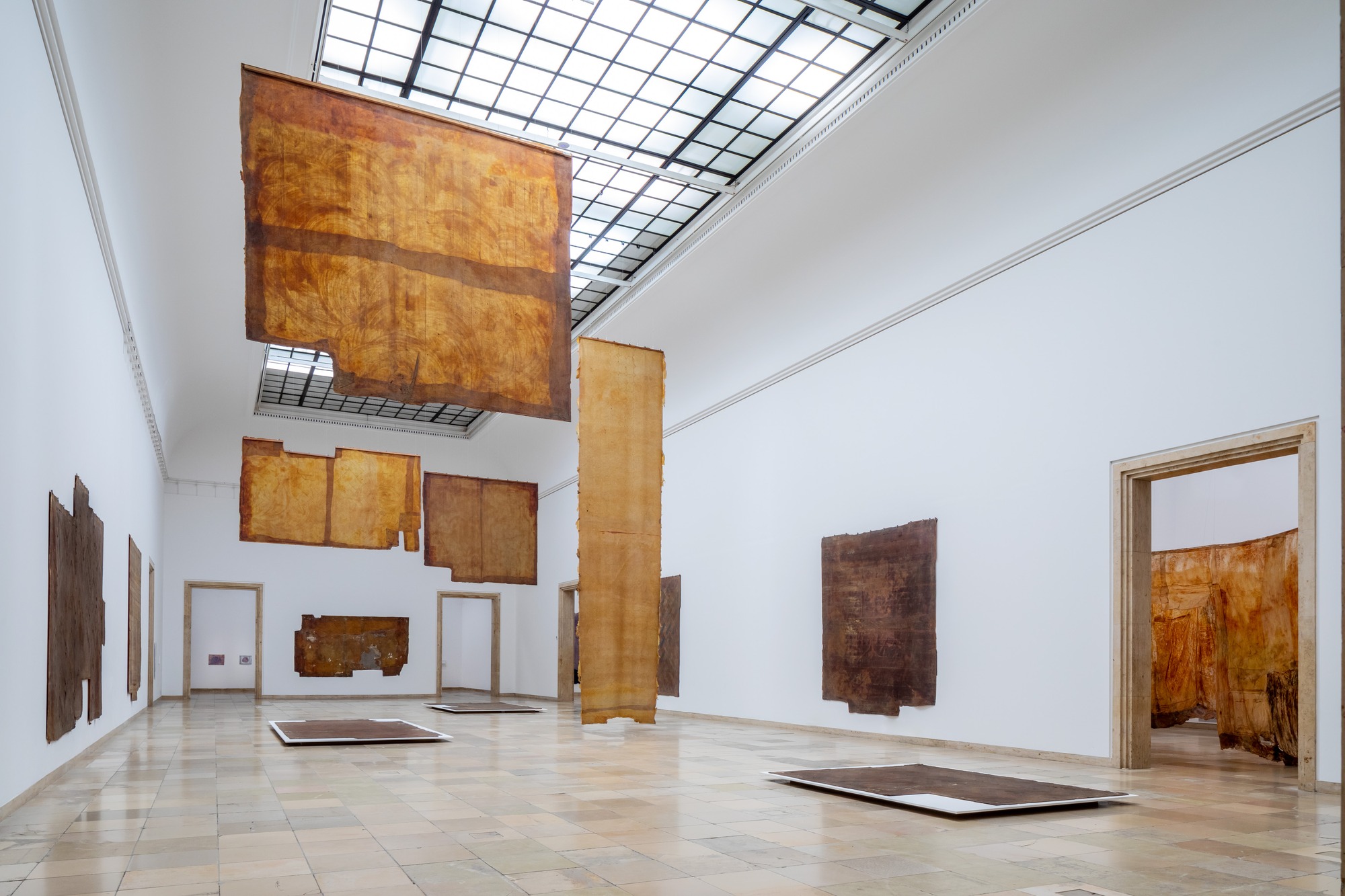 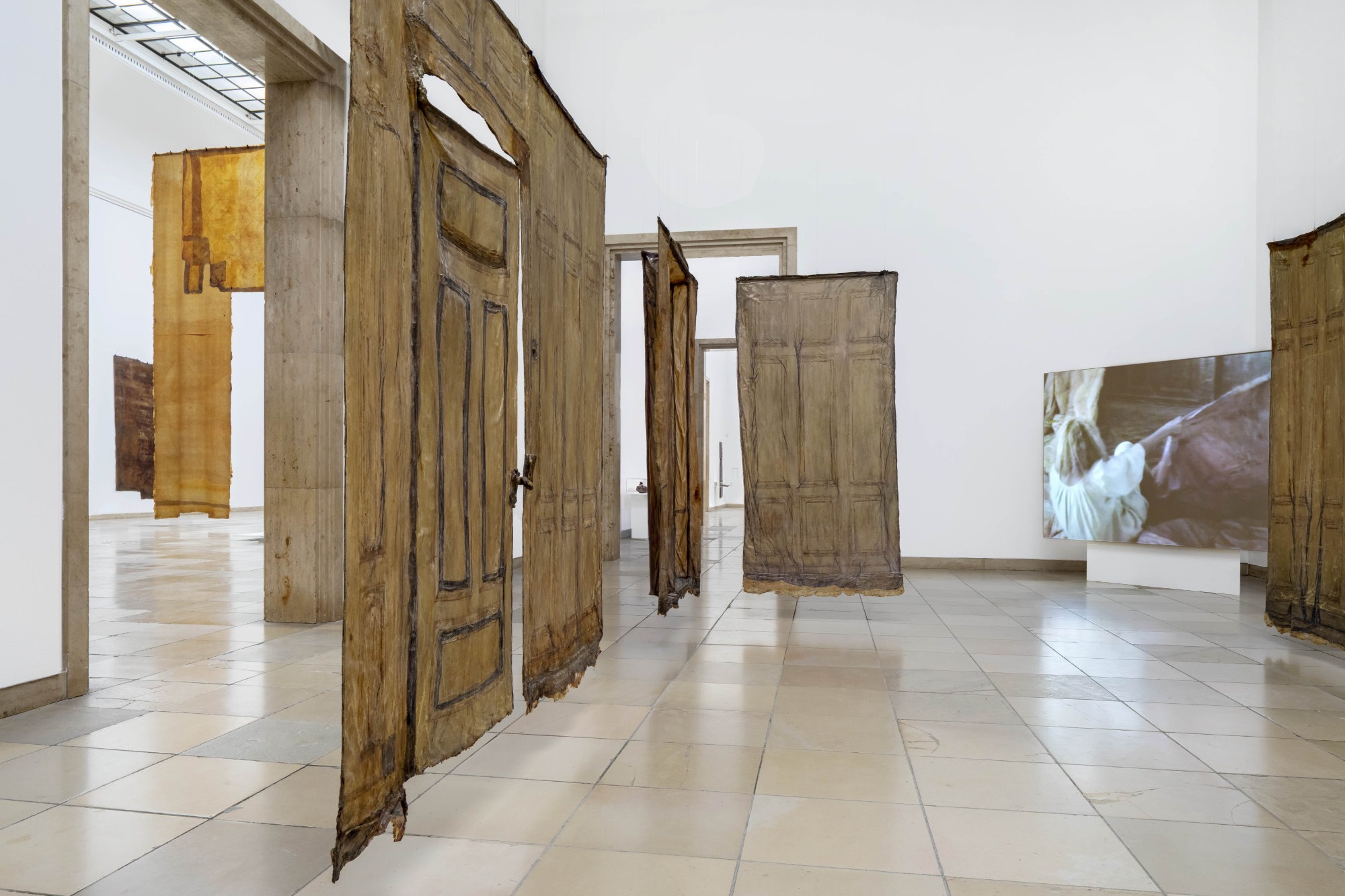 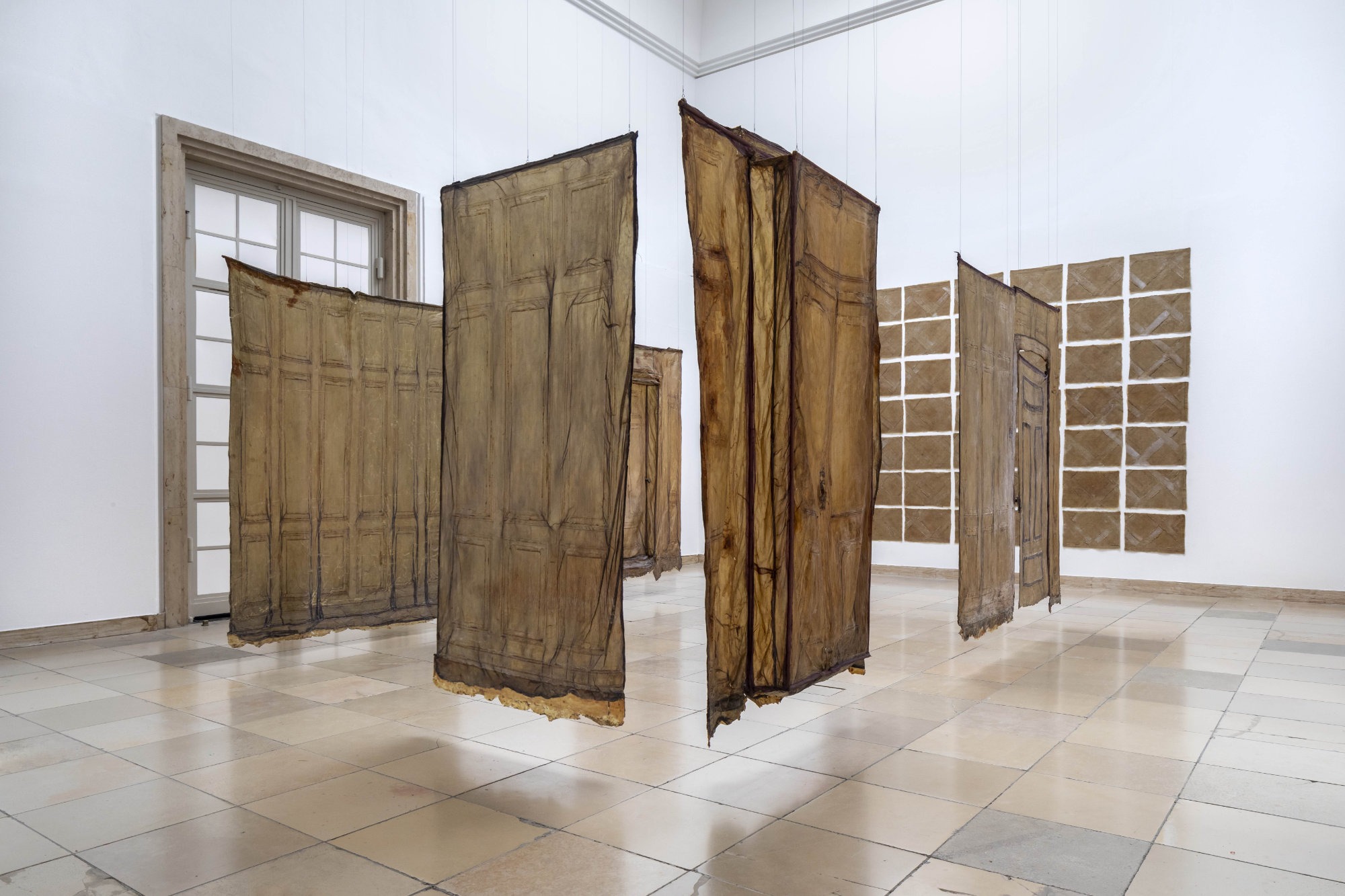 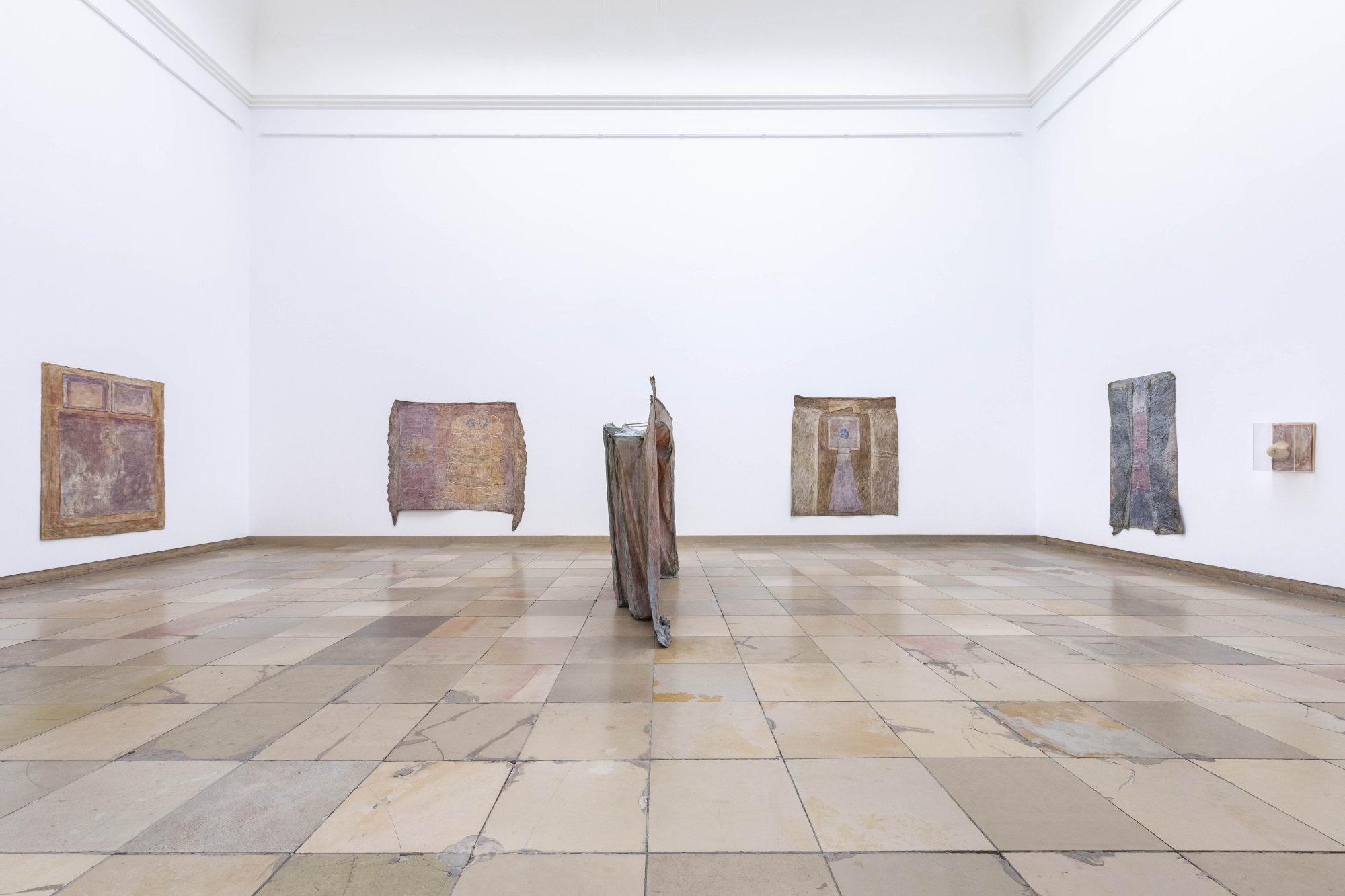 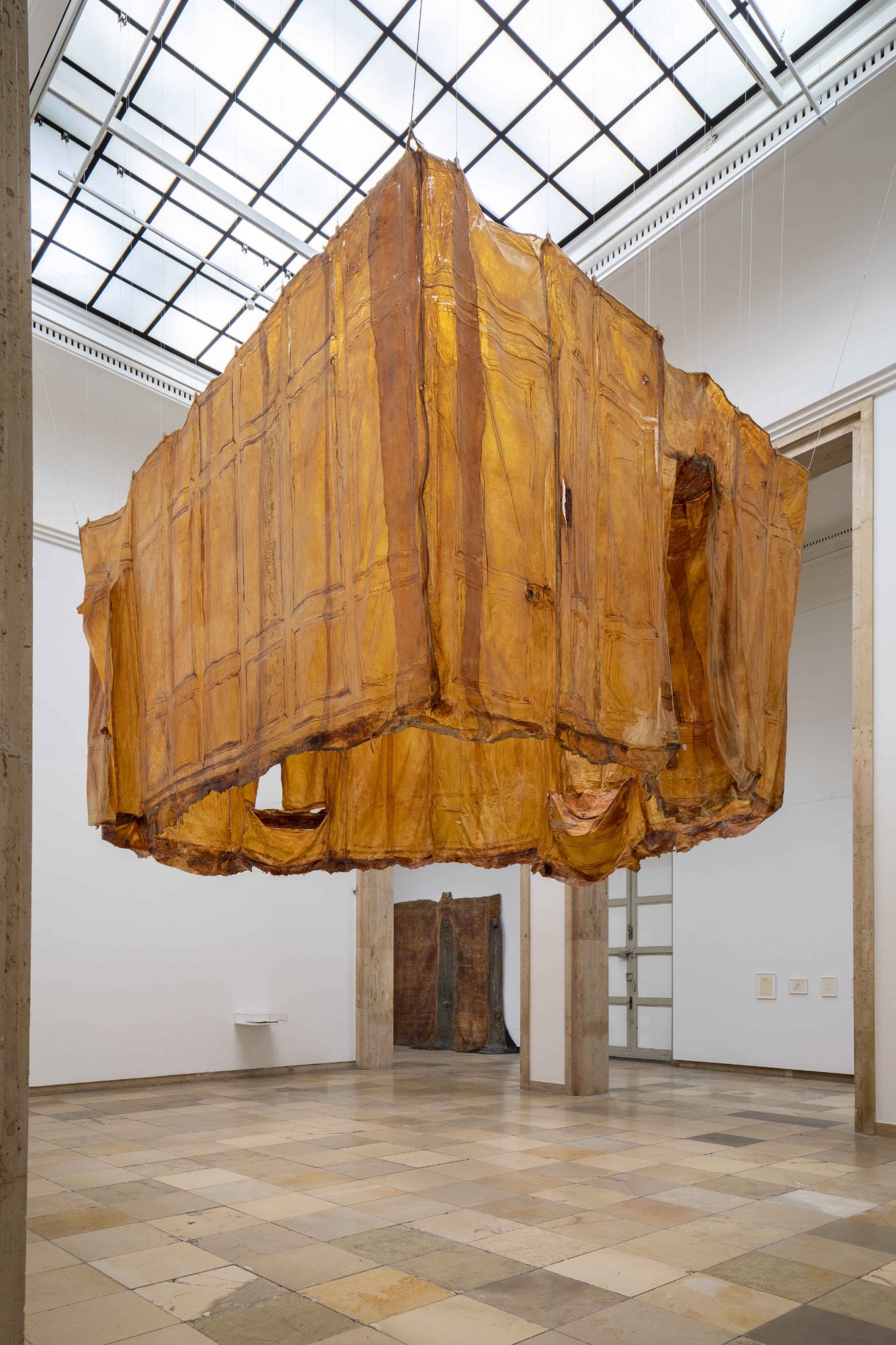 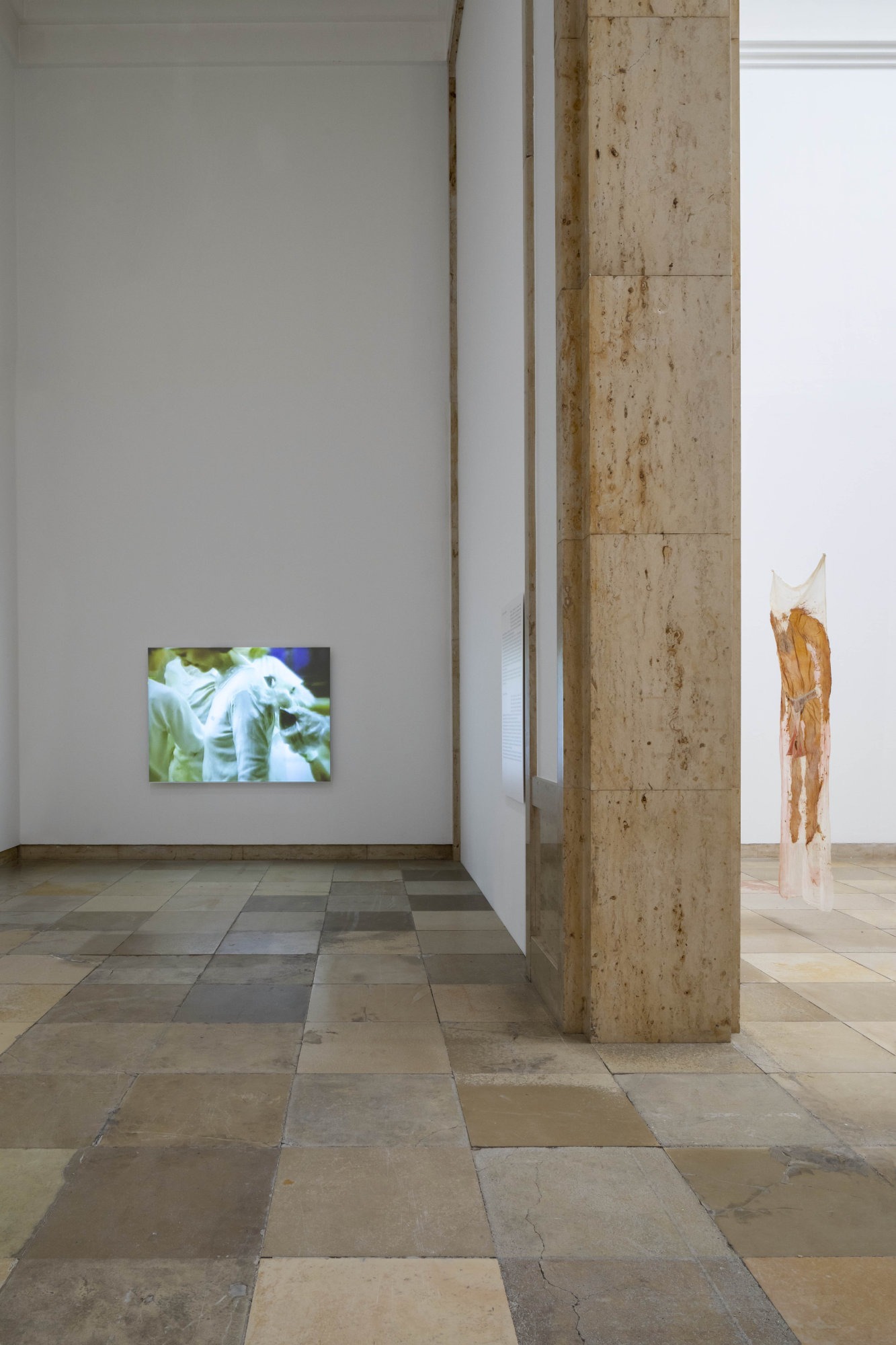 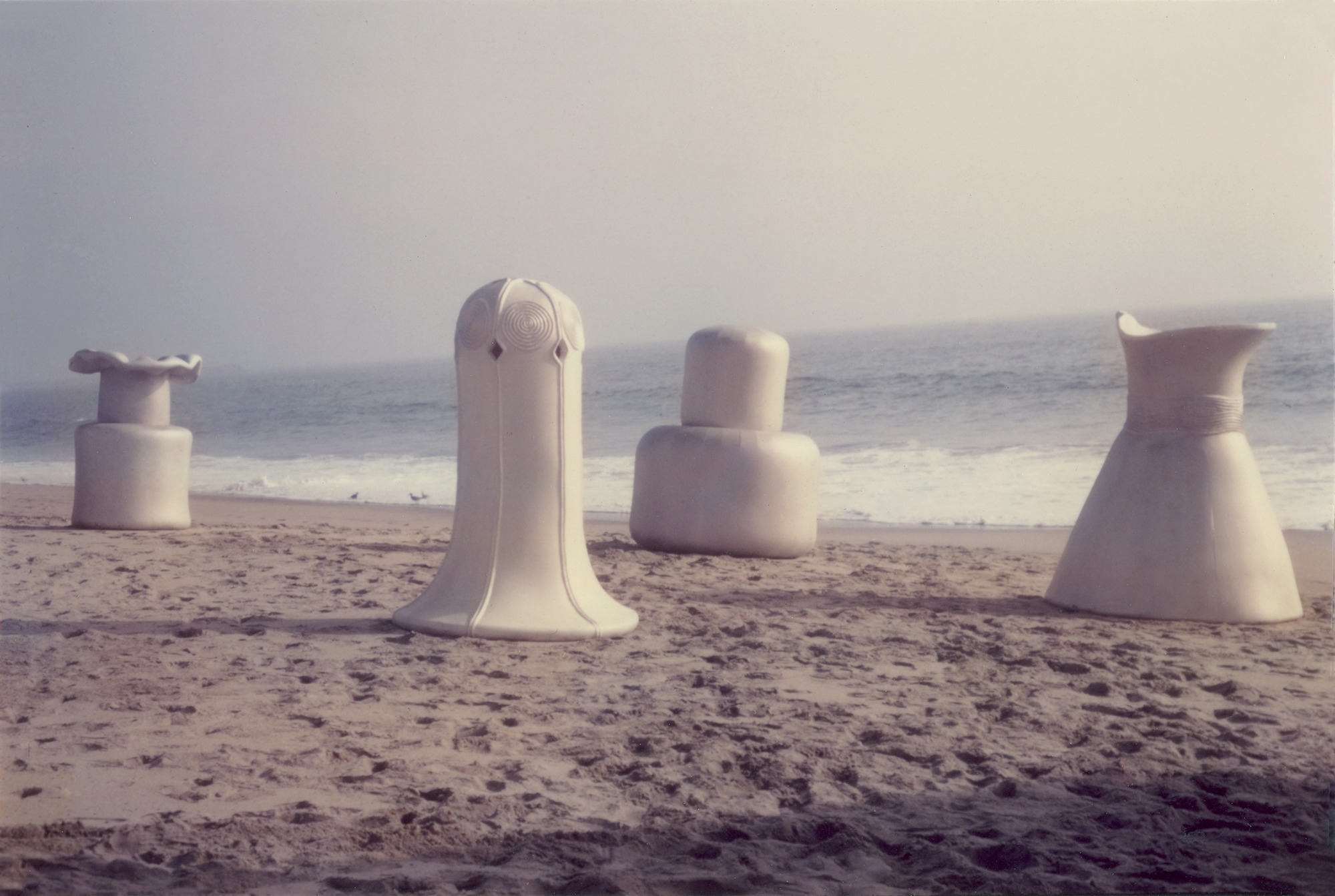 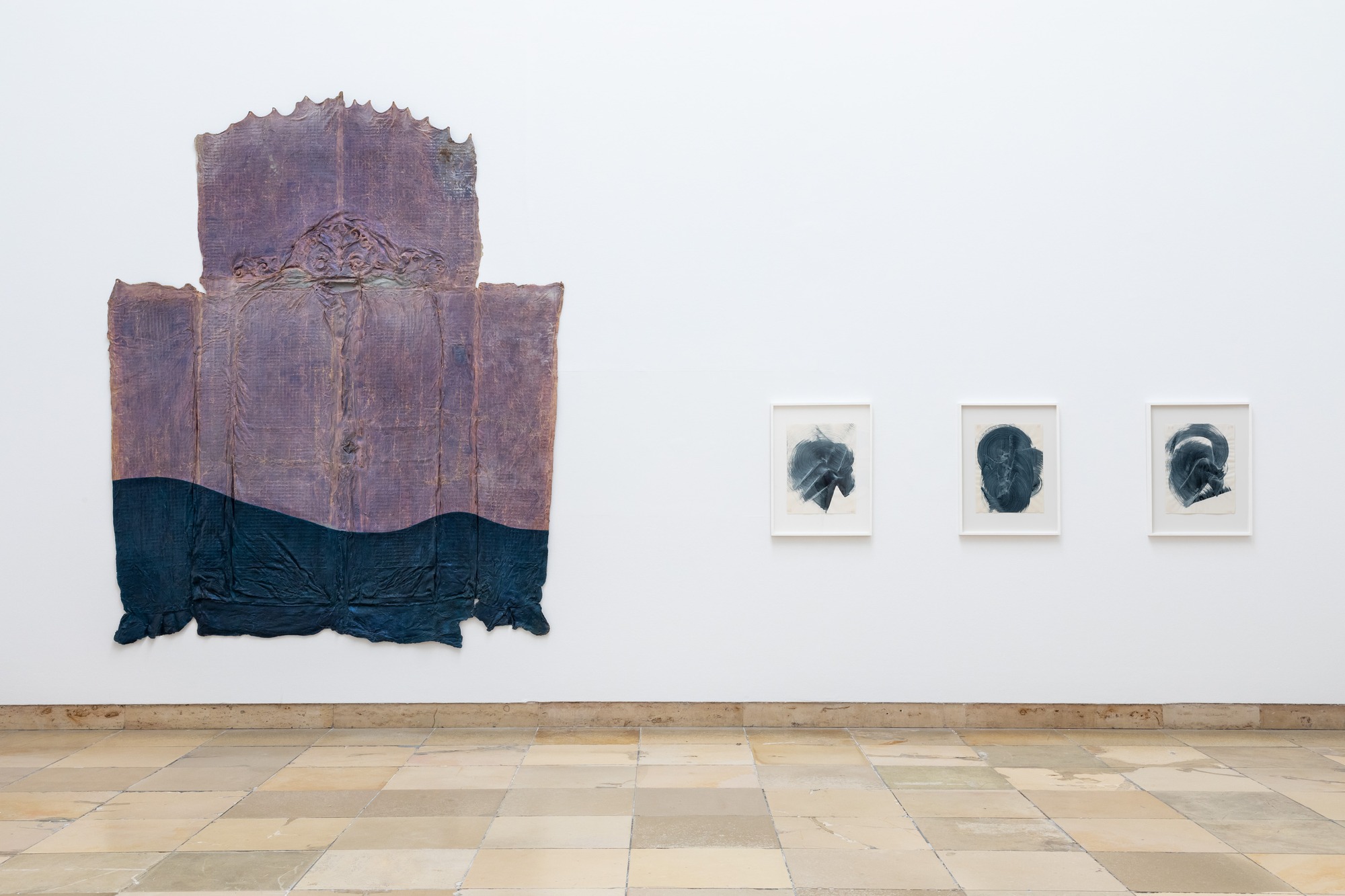 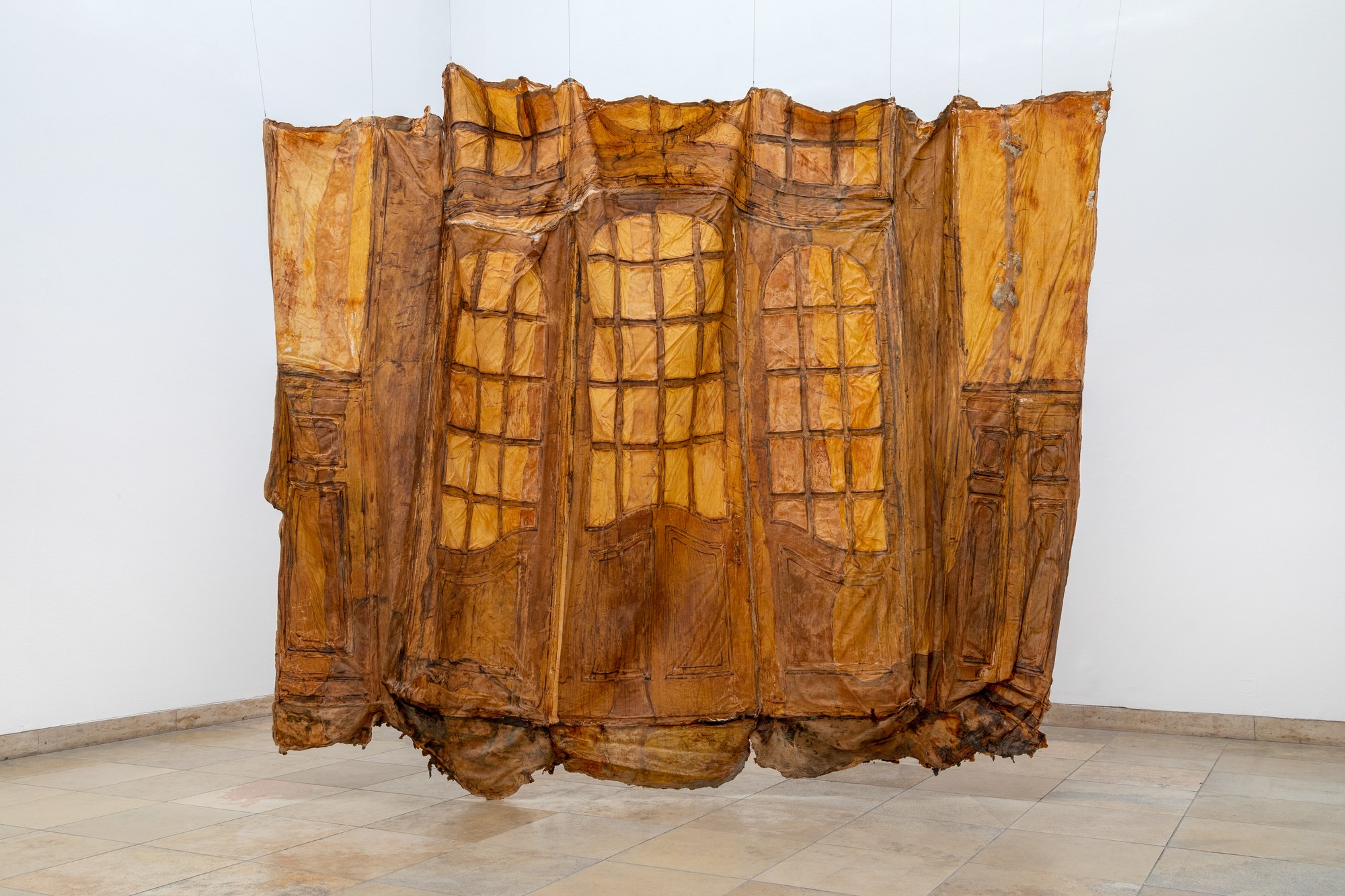 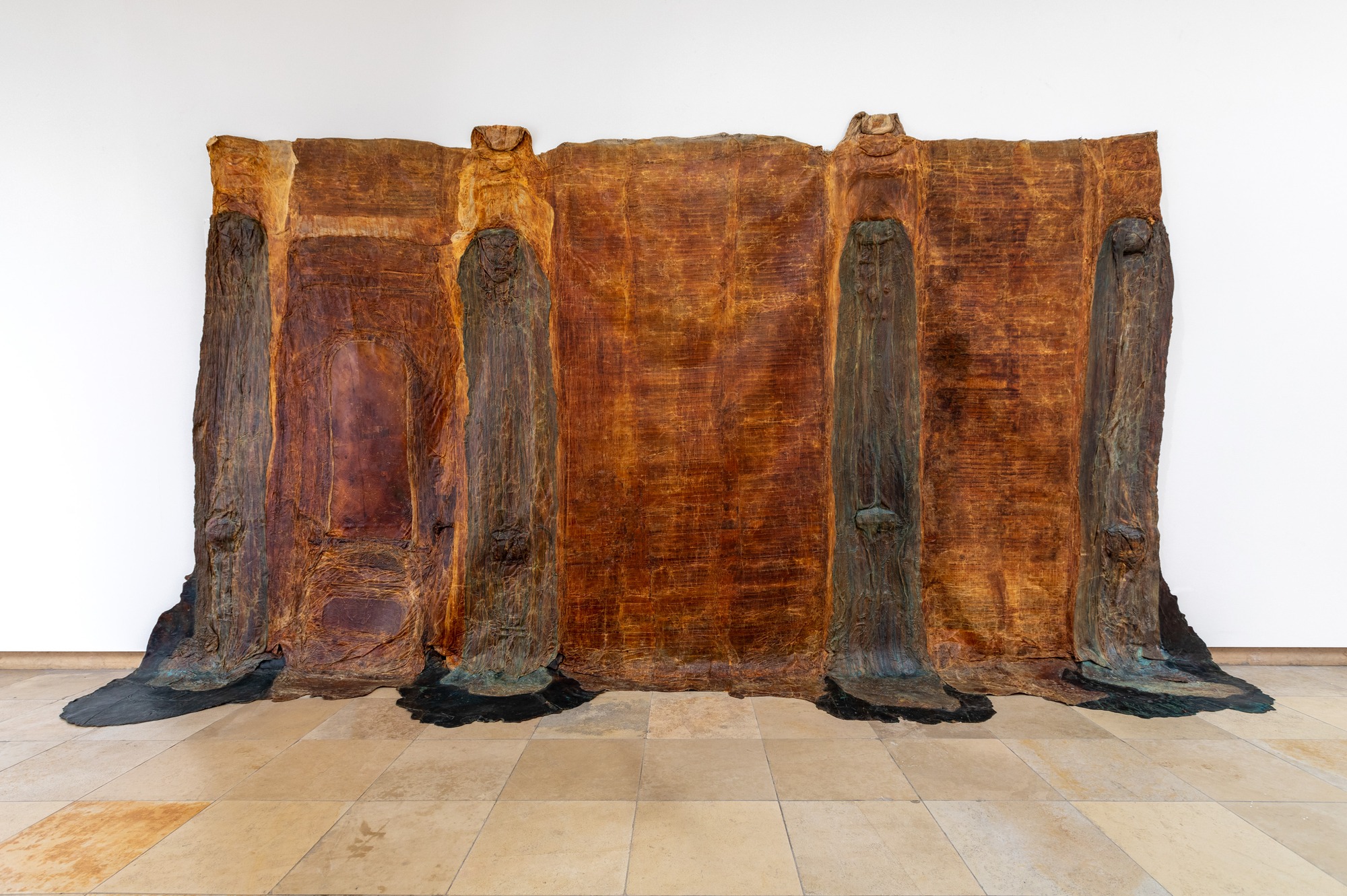 Heidi Bucher. Metamorphosen
Installation view
Grande Albergo Brissago (Eingangsportal), 1987
Haus der Kunst, 2021
Photo: Markus Tretter
"Rooms are shells, they are skins. Peel off one skin after the other, discard it: The repressed, the neglected, the wasted, the lost, the sunken, the flattened, the desolate, the reversed, the diluted, the forgotten, the persecuted, the wounded." Heidi Bucher

With Heidi Bucher (*1926 Winterthur, t1993 Brunnen, Switzerland), Haus der Kunst presents an important and overlooked artist of the international neo-avant-garde, whose latex works explore the constraints and liberation processes of human forms of existence. The retrospective presents all the artist's central groups of works to the public for the first time, from their beginnings to the experimental period in Los Angeles, the principal work with the architectural skins to the late work created on Lanzarote.

Constrained by gender bias, Heidi Bucher's career was initially steered not toward the fine arts, but toward fashion and textile design. She studied with Johannes Itten in Zurich, but also had female teachers such as the Swiss textile designer Elsi Giauque, who had herself been a student of Sophie Taeuber-Arp. In the 1940s, Heidi Bucher created works on paper and experimented with silk or tulle, which she glued or attached to cardboard, wood or aluminium. These constructions, which looked like paintings, prefigured her later turn to sculpture.

While her husband Carl Bucher created indoor and outdoor objects that glowed like jellyfish ("Phosphorescent Inflatables") or looked as if they were floating ("Apparel Sculptures"), Heidi Bucher was already developing the conception of static sculpture into a moving one. The form of the wearable and danceable body sculptures "Bodyshells" (1972), Heidi Bucher's first group of works, was inspired by sea creatures; the series was activated on Venice Beach. In these works the amalgamation of disciplines characteristic of the Bauhaus is visible: sculpture, architecture, design and dance merge with each other. In addition Heidi Bucher also integrated her interest in textiles. In the same year, the "Bodyshells" were exhibited at LACMA in Los Angeles. They will be reconstructed and reactivated for a symposium as part of this exhibition.

Heidi Bucher spent the years 1970 to 1973 first in Canada, then in California, where she came into contact with American feminist art: Judy Chicago and Miriam Schapiro founded the Female Art Program at this time, Judy Brady published her satirical manifesto "I Want a Wife", and not far from the Buchers' home sat the Woman's Building, the longest-lived feminist institution in Los Angeles. Heidi Bucher was a supporting member of Womanspace, a similar institution, and took part in an exhibition there. These encounters sharpened her perspective, as did her acquaintance with the work of Eva Hesse and the friendshi with Ed Kienholz that rew out of those years.

In 1973, after her return from the US and her separation from Carl Bucher, Heidi Bucher began her major work with the emancipatory gesture of latex skinning. At this point the appropriation and transformation of spaces becomes the leitmotif of Bucher's work.

For the copy of her own artist's studio "Borg" (1974-78, Bucher derived the name from Ge-borg-enheit, concealment), the cold storage room of a former butcher's shop, Bucher fixed gauze to the walls with fish paste, brushed them with liquid latex, and peeled off the dried layers in a process that required both physical exertion and care. Between 1973 and 1978, she created the "Einbalsamierungen" (Embalmings) and "Weichobjekte" (Soft Objects), a surreal-seeming world of images for coming to terms with female oppression: Bucher arranged textile found family objects such as underwear, children's and women's clothing or bedspreads and covered them with latex, then combined them with shells and applied color pigments of mother-of-pearl, purple or gold. The idea of overcoming both traumatic situations and conventional gender roles reached a first climax in the work "Libellenlust (Kostum)" (Dragonfly Lust, Costume, 1976), for which the artist shaped the wall skins into a dragonfly-like fan and embalmed it with mother-of-pearl.

In her parents' house, too, Bucher applied liquid rubber to the floor and walls of the "Herrenzimmer" (gentleman's room, 1978/82), which had formerly been reserved for the male members of the family, and symbolically replaced the patriarchal family structure with this skin. In the spaces from which women had been excluded by domestic and family obligations, she revealed the painful and personal by skinning in order to restore integrity and autonomy. She carried out a third skinning in her grandparents' "Ahnenhaus", (ancestral home, 1980-1982), the floors of which are now presented for the first time on multiple stories - just as a sketch by the artist envisaged.

The settings Heidi Bucher chose often had private and public significance at the same time, such as the Bellevue psychiatric clinic on Lake Constance. Heidi Bucher skinned the "Small Glass Portal", the "Audience Room of Doctor Binswanger" and the bathhouse (1988) on the villa-like grounds. Binswanger had treated his first subject, the alleged hysteria patient Anna 0. and later women's rights activist Bertha Pappenheim in the audience room in close exchange with Sigmund Freud. By skinning the entrance portal of the abandoned Grand Hotel Brissago (1987) on Lake Maggiore, Bucher confronted a highly ambivalent space collectively occupied by guilt and shame: the hotel had initially been a health resort for intellectuals and became a state-organised "internment home" for Jewish children and women during the Nazi regime.

If Heidi Bucher exposed social as well as private power structures with her skinnings, she also opened the space for change. The aspect of metamorphosis is expressed in her manifesto "Parkettlibelle", in which she describes her work as a "process of metamorphosis" in which the detachment from social conditioning is accompanied by the softening and mobilisation of objects —and of static relationships. Already in the soft material of the "Bodyshells", the performers' bodies were genderless, hidden and protected. Unlike the feminist artists of the US, who focused on female anatomy, and unlike Louise Bourgeois, Heidi Bucher did not explicitly display nudity, nor did she follow the psychoanalytical approach. Rather, she expressed a social utopia that strove for holistic possibilities of sensual feeling, such as only open up after conventional gender roles have been overcome. In this way, since the skinning of the Herrenzimmer in 1978, Bucher has consistently created a formally and aesthetically unique artistic language without resorting to figurative representations.

In the late creative phase from 1983 to 1993, Bucher created the "WeiBleimhauser" (White Glue Houses, 1988), small sculptures made of foam, textile and paint, which were glued together with white glue. The unadorned miniatures of minimalist restraint bear witness to Bucher's constant preoccupation with interior and exterior spaces. They refer to the architectural style of homes on the Canary Islands; Bucher now spent more and more time on the volcanic island of Lanzarote, in a house that had neither running water nor electricity. The door has symbolic significance in her works, as a threshold to the beyond. Ecological and natural cosmological questions now take centre stage and are also expressed in the large-format latex work "Die Rettung der Haut ozeanisch" (Rescue of the Skin Oceanic, 1981).

To realize her projects Heidi Bucher made preparatory drawings, action sequences, and left work instructions. Knowing the importance of her work, she also had the performative production process documented on film and photographically. This material, some of which has only just been discovered and restored for the exhibition, frames the more than 150 exhibits with the view that reconstruction was a concern of the artist early on.

The exhibition at Haus der Kunst is supported by central works from the Centre national d'art et de culture Georges Pompidou, Paris, the Jill and Peter Kraus Collection, the Kunstsammlung des Kantons Zurich or the Migros Museum fill- Gegenwartskunst, Zurich, in addition to the substantial collection of The Estate of Heidi Bucher.

An exhibition by Haus der Kunst in cooperation with the Kunstmuseum Bern and the Muzeum Susch
www.hausderkunst.de