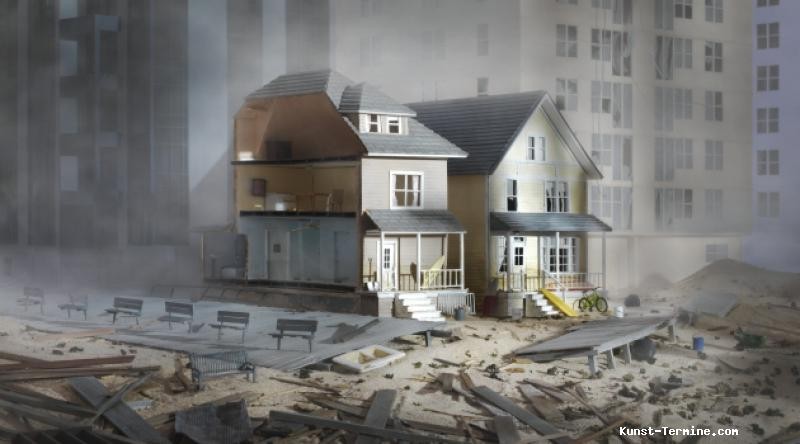 The photographic works of James Casebere (born in 1953, Lansing, Michigan, United States) explore architectural subjects such as domestic settings, flooded corridors of grand mansions, bare spaces of prison interiors, Moorish and Islamic architecture, ancient water tunnels in Bologna, or the Jewish Ghetto in Venice. However, these images emerge from a singular approach of production: they are photographs of detailed, self-made architectural models in which completely imagined and fabricated scenes are subsequently transposed into a pictorial record. Thus Casebere generates images that hover somewhere between the fugitive and the sublime, between the representational and the staged.
With more than 70 works, the exhibition presents images drawn from all periods of the artist's career. The survey includes recent large multi-panel and single-panel color photographic works; early black-and-white gelatin silver prints, dye destruction prints, waterless lithographs, and Polaroid prints. In addition, for the first time, Casebere shows working notebooks, a series of collages, and an extensive collection of never before exhibited Polaroid studies of individual works as they change through varied stages of production to the finished single image. For the exhibition in Haus der Kunst, Casebere realizes four new site-specific monumental works in the form of friezes in the gallery's grand staircase.

The exhibition is made possible with major support by Alexander Tutsek-Stiftung
www.hausderkunst.de