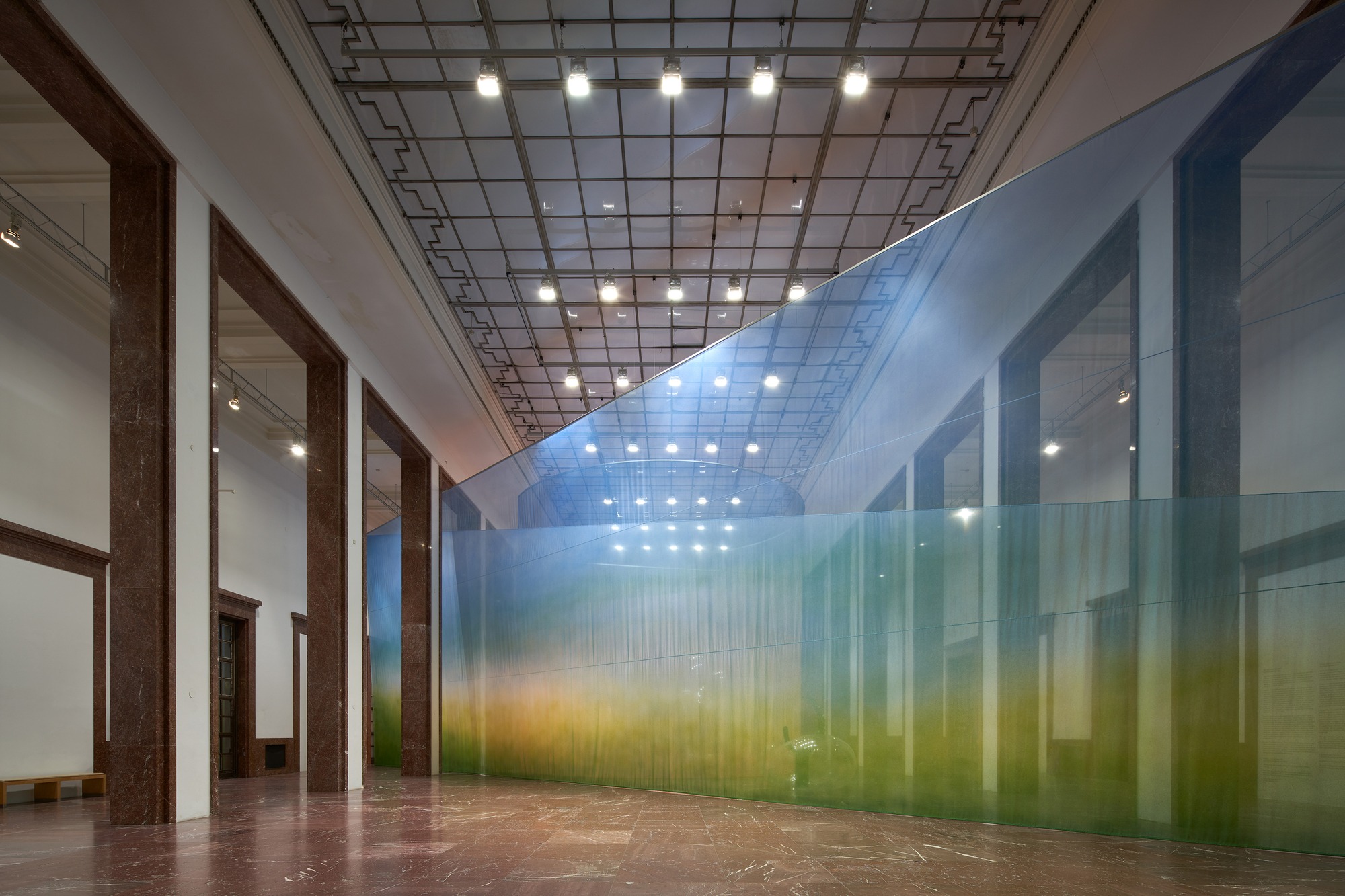 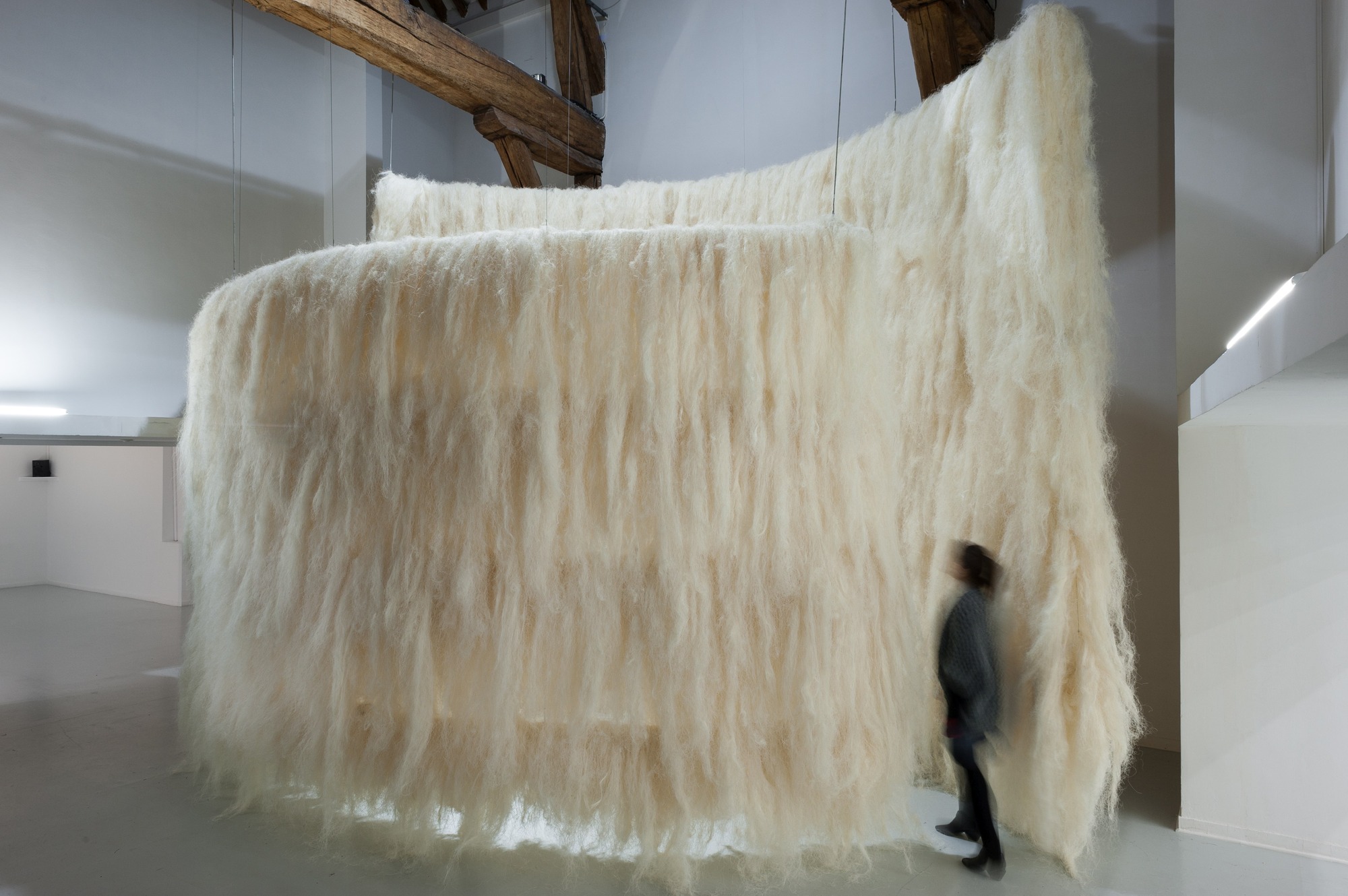 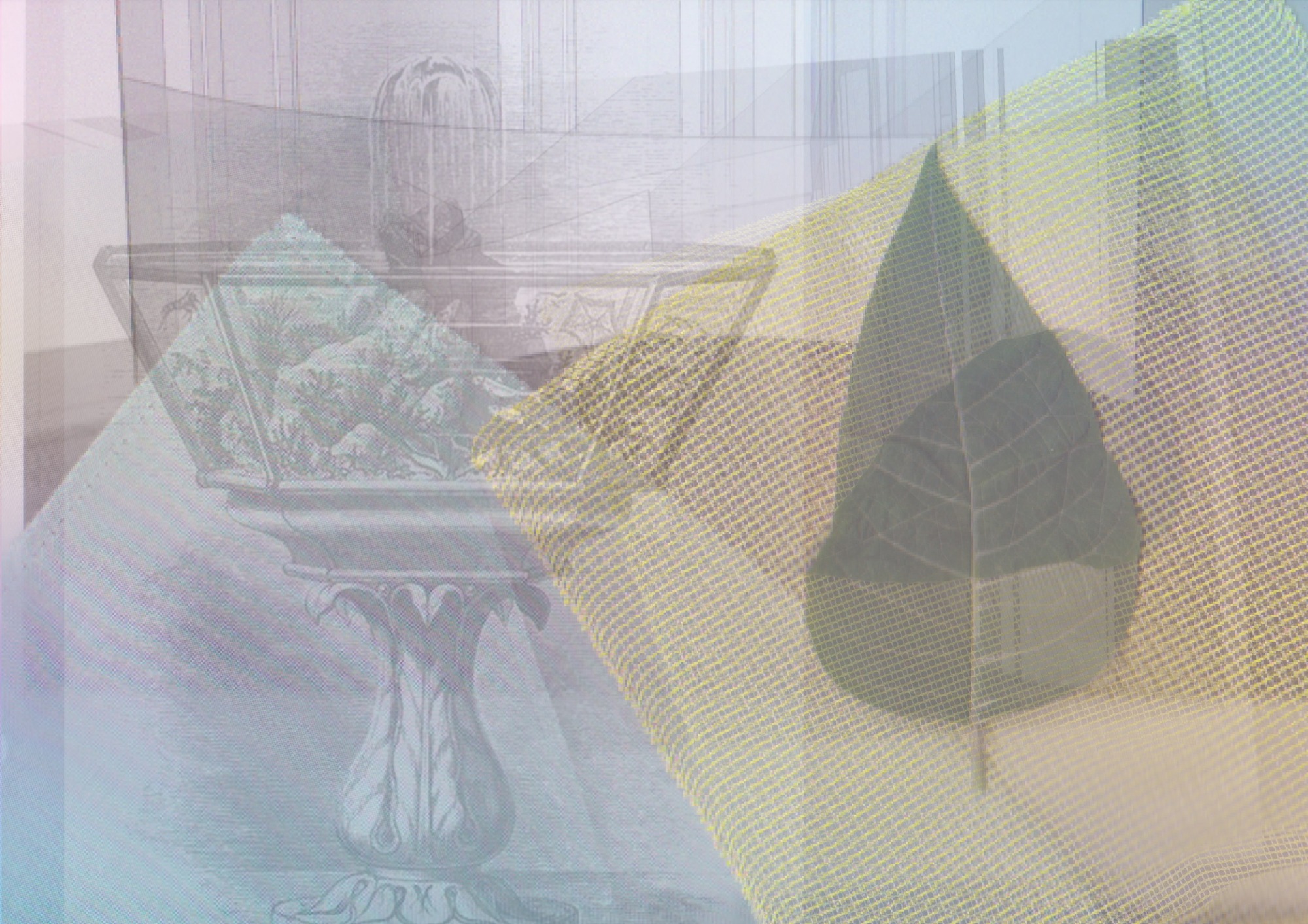 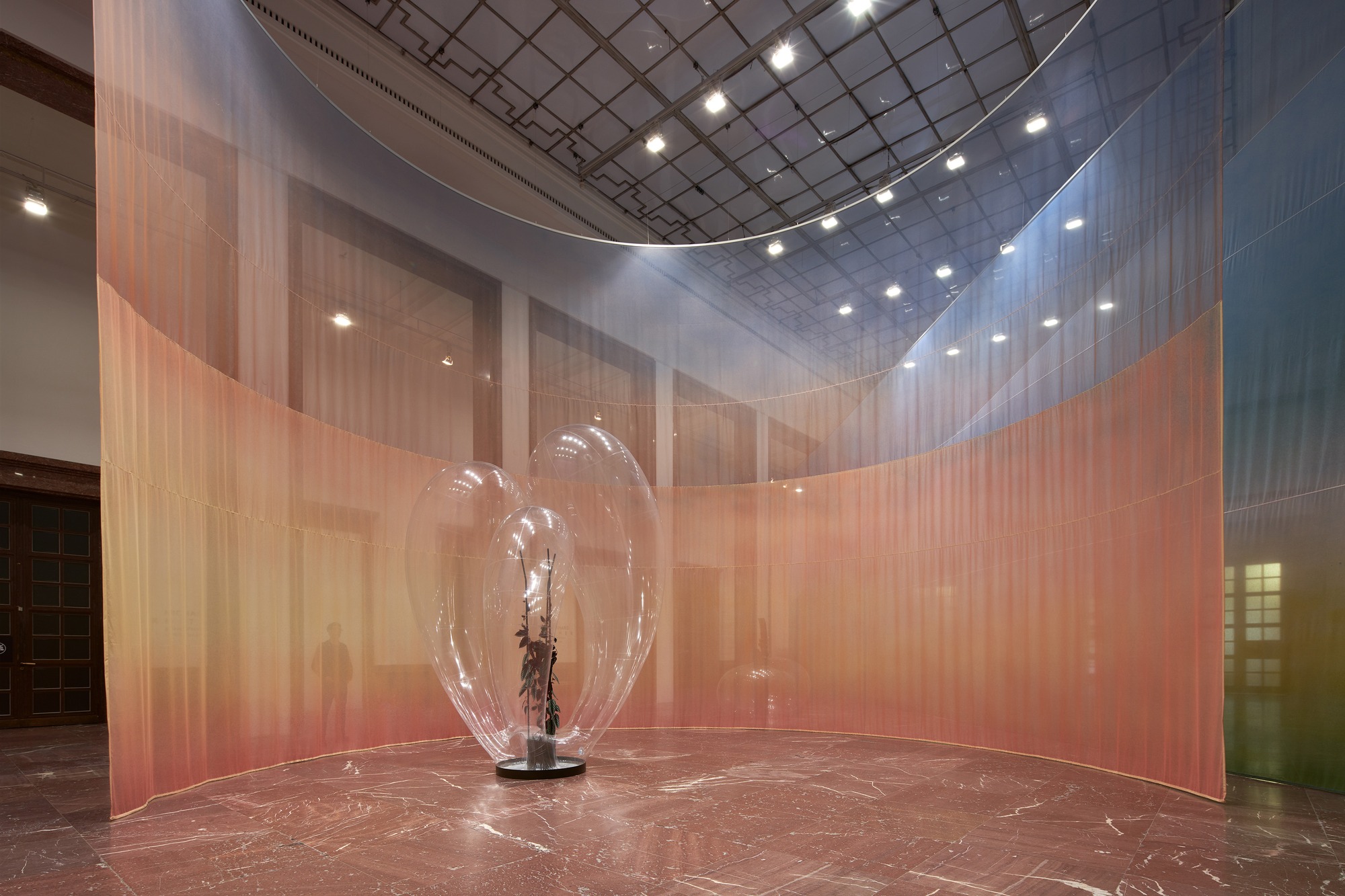 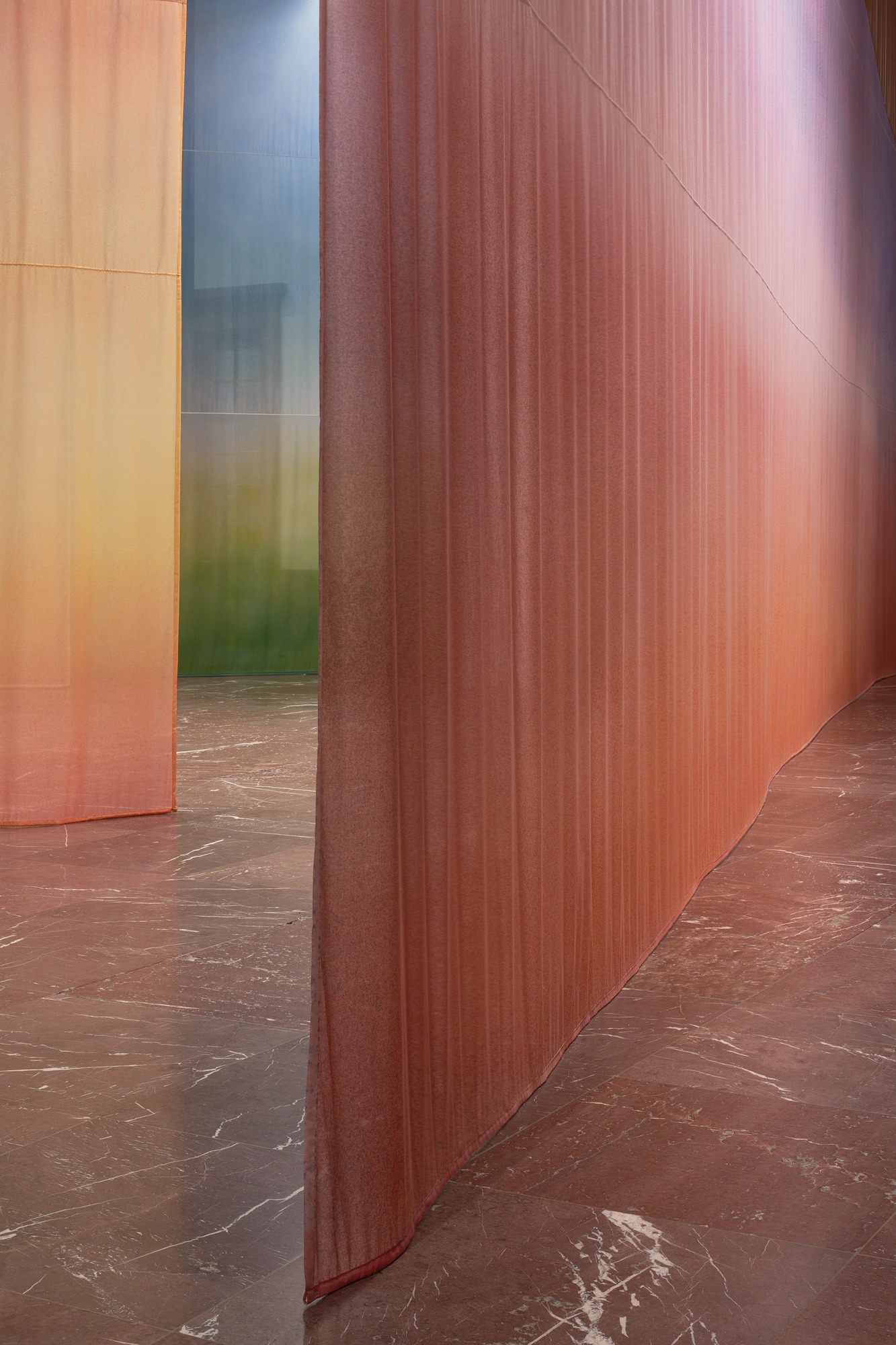 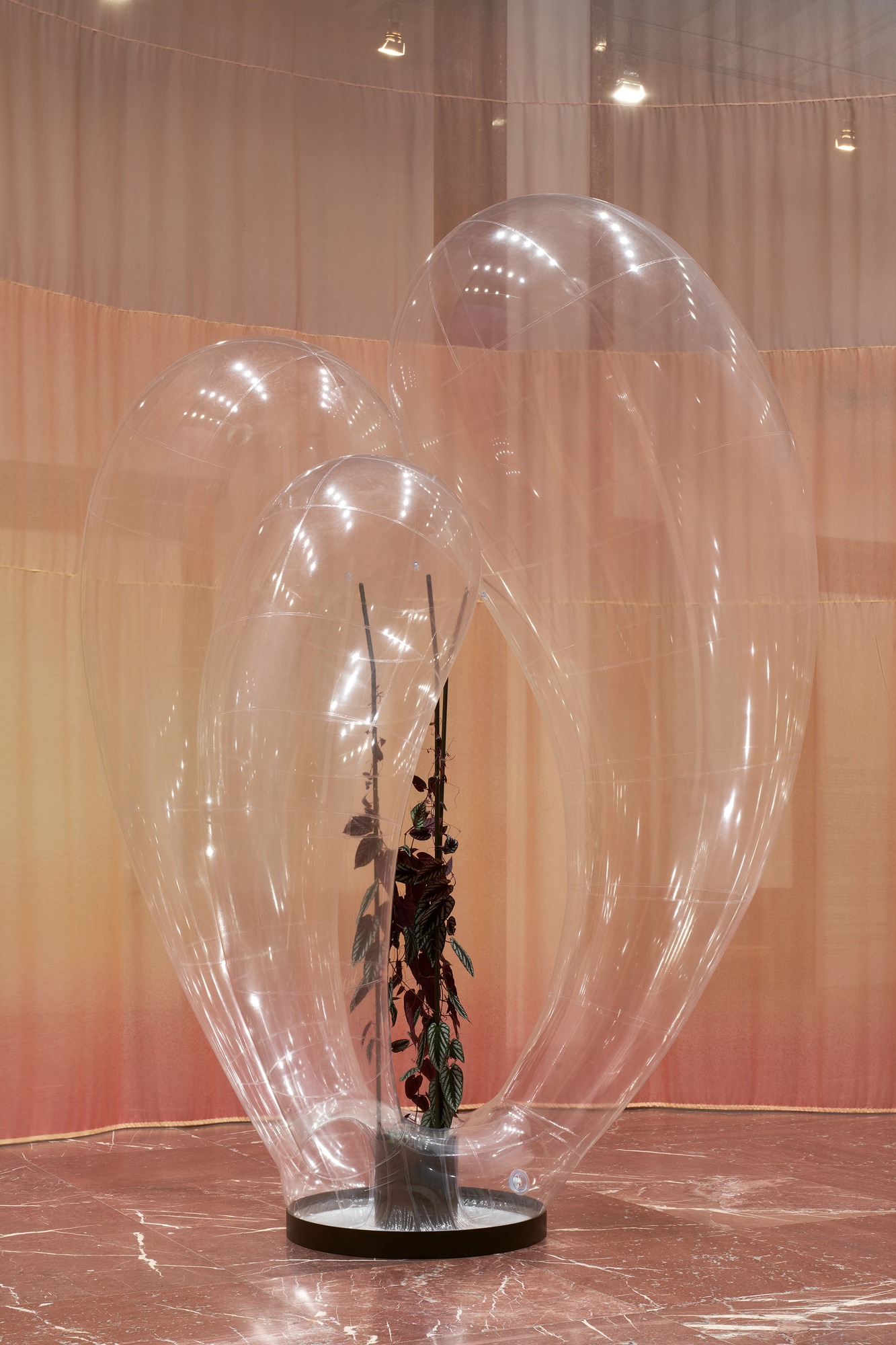 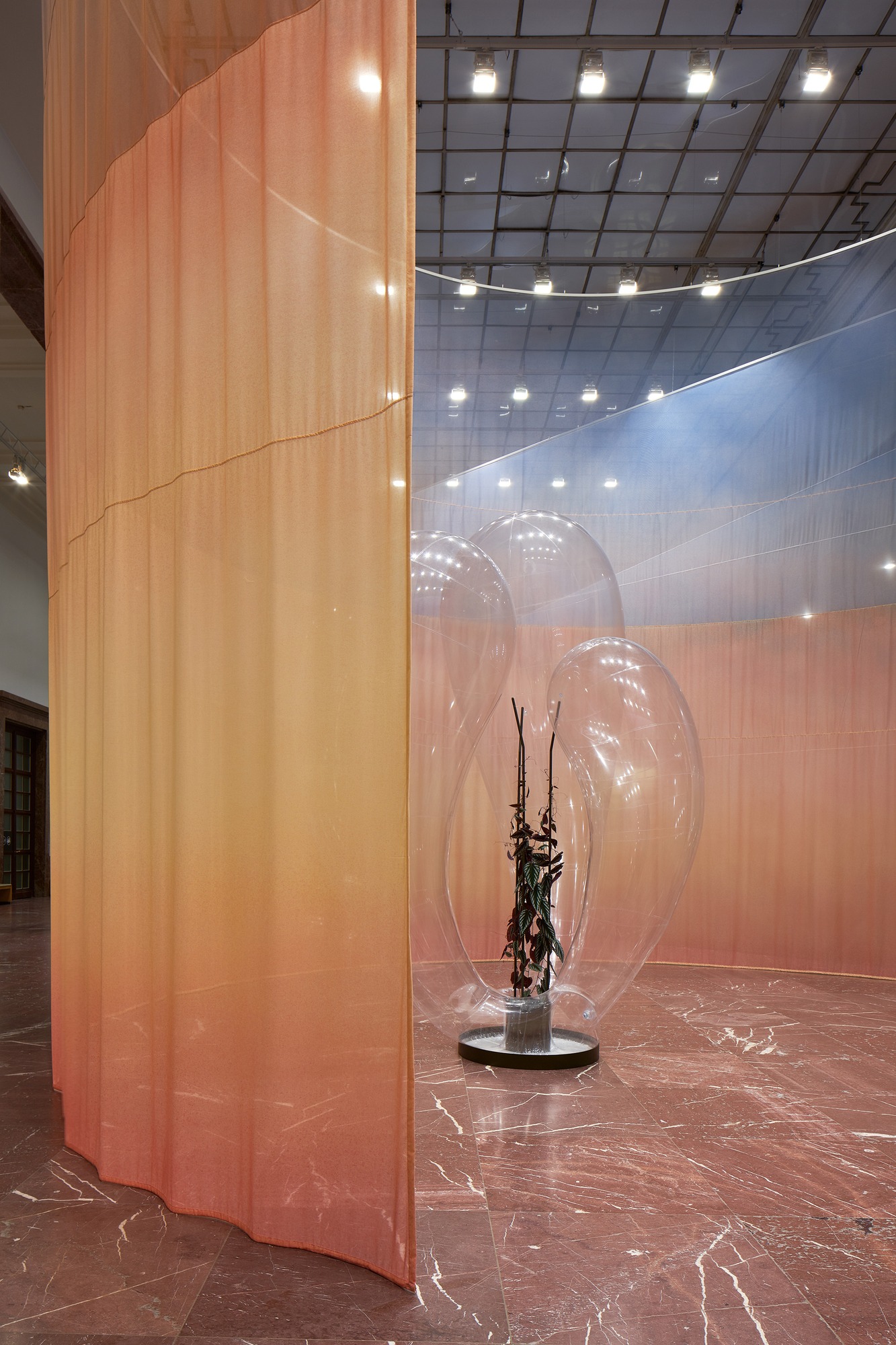 ,Plot" comprises series of artistic interventions, staged across three acts. For the first act, which opens on 9 October, three semi-transparent hanging fabric panels will be suspended from the high ceiling of the Middle Hall, altering the perception of the space's volume and encouraging visitors to discover new circulation paths. With their colour gradients in green and pastel tones, these hanging elements evoke the idyllic quality of the nearby English Garden. This environment is supplemented by three large inflatable sculptures, each containing living plants. Inspired by the portable terrariums invented by botanist Nathaniel Bagshaw Ward, these sculptures recall the botanical technologies employed in the 19th century in order to transport exotic plants all over the world. At the same time, these evocations of glasshouses also speak to the prehistory of the Haus der Kunst, and in particular the design of the so-called „Glass Palace" which was located in Munich's Old Botanical Garden between 1854 and 1931 and whose subsequent ruination by fire provided the impetus for the construction of the „Haus der Deutschen Kunst". Taken as a whole, the laboratory-like character of these sculptures imbue the ensemble with a futuristic tone, and contrast with the more painterly aesthetic of the fabric panels.

The two further acts in December and March comprise a festive parade, replete with banners and illuminated lanterns that will be subsequently installed on the museum's exterior, as well as an additional discursive component.

By dividing the commissioned work into three acts. Kiwanga breaks away from the idea of a completed or finished work of art and expands our understanding of public space. Conceived performatively, „Plot" thus shifts freely between artwork and event.

Kiwanga's practice traces the pervasive impact of power asymmetries by placing historic narratives in dialogue with contemporary realities, archives, and tomorrow's possibilities. Informed by extended periods of research and instigated by marginalised or forgotten histories, Kiwanga's work is commonly articulated across a range of materials and mediums, including sculpture, installation, photography, video, and performance. Through this, Kiwanga has developed an aesthetic vocabulary that she describes as 'exit strategies;' these works invite one to find alternative ways to navigate the future.

In keeping with the title of the series, 'DER ÖFFENTLICHKEIT — Von den Freunden Haus der Kunst,' ”Plot" explores what it actually means to be 'public' in the present moment. Instead of inviting passers-by to merely engage in acts of consumption, as is usually the case in the few remaining areas in public space, Kiwanga instead suggests a form of living together in which binaries such as inside/outside, nature/culture, public/private, as well as idyll/urbanity are negotiated.

In 2018 Kiwanga received the Frieze Artist Award (USA) and the renowned Sobey Art Award (Canada). This year the artist was nominated for the Prix Marcel Duchamp (France); the prize is accompanied by an exhibition at the Centre Georges Pompidou (7 October 2020 - 4 January 2021).

The exhibition is part of Canada's culture program as Guest of Honour at the Frankfurt Book Fair and is supported by the Canada Council for the Arts and the Government of Canada.
www.hausderkunst.de