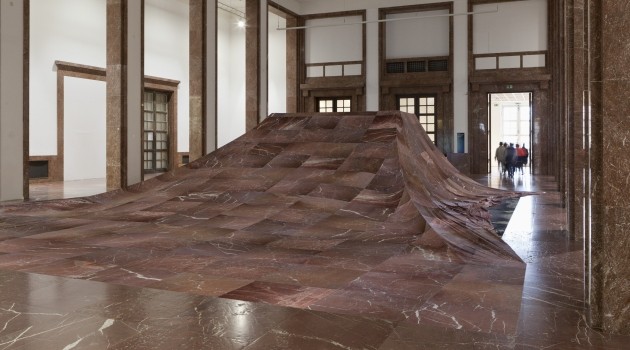 For the fourth edition of DER ÖFFENTLICHKEIT − Von den Freunden Haus der Kunst Laure Prouvost has created "We would be floating away from the dirty past", an installation including sculpture, video, and an ambitious spatial intervention. With her inimitable sense of humor and imaginative flair, Prouvost addresses the architectural setting of the Middle Hall in Haus der Kunst, as well as the art institution itself.

Entering the Middle Hall, one is greeted by a metal figure mopping up dirt from the floor. Across its virtual face reads "We heard you coming," and, "We have been waiting for you to arrive for so long," as images of flowers, waves, and mops flash up before the viewer. Behind it, the Hall's red marble floor − the marble is often referred to as "blood sausage" marble − gradually rises upwards, detaching itself from the ground on which it lies. At the opposite end of the space one encounters more figures. They loiter at the entrance to a cave and hang around inside. At the front of this cavernous space a large video projection entitled "If It Was" looms. Walking inside, underneath the Middle Hall's marble tiles, one enters a dusty environment, full of memories and the debris of the past. On the carpet images of old bicycles, tools or a shoe brush emerge, as well as ghosts from previous projects and exhibitions that have taken place here, such as the first DER ÖFFENTLICHKEIT project by Haegue Yang, or furniture arranged for a fashion show in the late 1950s. In this vortex of images rising up from the sediments of time, pink bottoms and breasts float across the carpet whilst texts − "so much happend here before you came" or "nothing is lost" − are inscribed on its filthy surface. While the carpet conjures up times gone by, Prouvost's new video "If It Was" muses on the museum itself and what it might become. As a montage of image and text continually interrupt each other a voice-over speculates about what Haus der Kunst would be like if it was her museum. What if the angles of the building were all a bit softer? What if one could take the roof off and have palm trees inside?

Experienced together the different elements of "We would be floating away from the dirty past", invites us to look underneath the shiny surfaces of the museum, into its forgotten past, and out to possible futures. As such Prouvost exposes the underside of the art institution, offering it up as a site for imaginative speculation.
www.hausderkunst.de