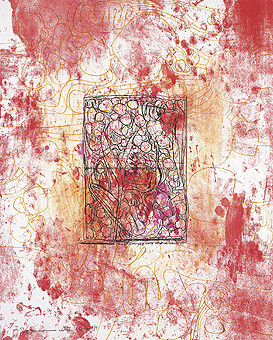 since the beginning of the 1970s, munich along with new york and london, was leading with regards to editions and multiples. the exhibition ‘made in munich’ shows works from 1968 to today, which were initiated and produced by a.o. dedicated munich galleries and ‘editeurs’; over the last 40 years they continued to offer artists the possibility to experiment with new techniques, or to translate their artistic vocabulary into a new medium. but what constitutes an edition or a multiple? are they simply artworks, experiments or vehicles for reaching a wider public? signed and numbered, editions and multiples became, particularly in the early 70s, individual manifestos that pursued the idea of democratising art in order to reach a younger audience.
graphic editions – prints, etchings, photoengravings – offer the artist the possibility to experiment; conceptualisation and production processes are closely linked, and the artist often spends several weeks at the printers before approving a print – often with unusual results. hermann nitsch needed more than seven years for his edition ‘the architecture of the orgies mysteries theatre I + II’, where he mixed materials and techniques such as ink, chalk drawings and etchings: exhibited are 16 prints hung in two blocks of height totalling about 12 metres.
a multiple is often an object that is produced according to the artist’s wishes or created by him or herself in several editions: for example rosenthal’s porcelain editions, which were designed by e.g. lucio fontana or roy lichtenstein; or invitation cards as mini artworks. on occasion joseph beuys would reduce his involvement in merely finding the material and providing the idea, with others, e.g. the multiple ‘freitagsobjekt’ '1a gebratene fischgräte hering’ [friday object first choice fried herring’ fishbone] (1970), which he produced in an edition of 25 himself: ‘certain works have to be limited (...), since i am not interested in frying fishbone for the rest of my life!’ since beuys created a large number of multiples a whole room is dedicated to him.
‘made in munich’ shows outstanding works by international as well as german artists a.o. by georg baselitz, joseph beuys, marcel broodthaers, dan flavin, lucio fontana, richard hamilton, carsten höller, jeff koons, hermann nitsch, blinky palermo, gerhard richter, dieter roth and andy warhol.
www.hausderkunst.de