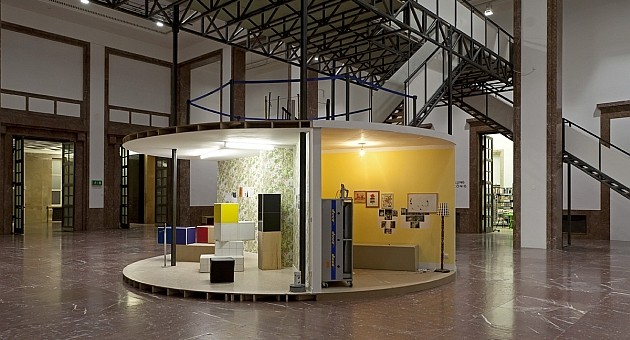 Haus der Kunst is pleased to present Manfred Pernice for the 2013/2014 annual commission "Der Öffentlichkeit — Von den Freunden Haus der Kunst", a site specific sculptural installation conceived exclusively for the museum's Middle Hall.
After the rousing success of the inaugural commission by Haegue Yang, Berlin-based Manfred Pernice (b. 1963) has created an expansive, accessible installation consisting of various, often "recycled" works. Recycling, i.e. the reuse of materials, is an inseparable part of Manfred Pernice's creative process. The artist is interested not only in the reusing of found objects and materials of various origins, but also, what is more remarkable, he uses his own earlier works as architectural elements for new works or as installation pieces in altered contexts of meaning. Pernice's intervention for Haus der Kunst's central Middle Hall relates directly to the space's architecture and consists of two main elements: Pernice places his architectural sculpture "Tutti" from the year 2010 in the middle of the room. A spiral staircase leads up to the sculpture's roof. From there, via a second staircase, the visitor reaches a bridge, which spans the Middle Hall and from which visitors can continually view the room from new perspectives. For the bridge, the artist has developed an installation, which, as a result of the work process, evolved on site. This form of spontaneous response to the spatial conditions is characteristic of Pernice's sculptural approach.
"Tutti IV" is a work in progress and navigates the ambiguous zone between stability and instability; the installation will also house works by other artists, and it will continually change over the course of its year-long presentation via interventions by Manfred Pernice.
Manfred Pernice's "Tutti IV" installation is the second in the series "Der Öffentlichkeit - Von den Freunden Haus der Kunst", an annually commissioned artwork conceived for the museum's Middle Hall; it follows Haegue Yang's 2012 inaugural work "Accommodating the Epic Dispersion - On Non-cathartic Volume of Dispersion." The annual art commission is grounded in the idea of the central role that art and artists play in global debates. With this view, Haus der Kunst wishes to acknowledge international artists who, over the course of their careers, exemplify and have demonstrated models of artistic excellence, conceptual rigor, experimental spirit, and whose ideas have had enduring impact in the field of contemporary art and its discourses.