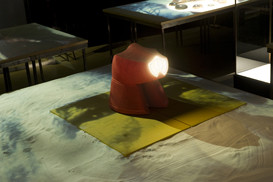 the exhibition is inspired by the "bestiarium: theater and garden of wildness, battle and happiness", a text by the gallery owner rüdiger schöttle. the theatre garden it describes refers to the baroque garden with its natural and artificial worlds, which inspired schöttle to create an exhibition in 1986 called "theatergarten bestiarium". he conceived a combination of real images with imaginations, thereby creating a unique world of shimmering, ephemeral projections and reflections, through which the visitor moves, as both spectator and actor at the same time. after a two-year development phase, the "theatergarten bestiarium" was shown for the first time at the institute for contemporary art,
p.s. 1 in new york. thirteen artists implemented the project described by schöttle, producing in the process specifically created works that were presented in a jointly developed installation. the resulting "gesamtkunstwerk" brought together architecture, music, photography, film and theatre and inspired an up-coming generation of artists and curators – e.g., liam gillick, dominique gonzales-foerster, rirkrit tiravanija and hans-ulrich obrist – to create new types of exhibitions. "theatergarten bestiarium is a milestone in exhibition history. what was especially remarkable ... was that the exhibition discovered a new way of exhibiting. richard hamilton once told me: one only remembers exhibitions that take a new approach. so ‘theatergarten bestiarium’ is in fact a model." the exhibition, curated by rüdiger schöttle and produced by chris dercon, was an experiment and right from the start conceived as a "work in progress". after its first stop at the p.s. 1, the "theatergarten bestiarium" was adapted five times to suit the spatial layout of other exhibition spaces. as of march 2011, it will be on display at the galerie der freunde in the haus der kunst.
the exhibition displays works by bernard bazile, james coleman, fortuyn/o’brien, ludger gerdes, dan graham, rodney graham, christian philipp müller, juan muñoz, hermann pitz, rüdiger schöttle, alain séchas und jeff wall. the music is by glenn branca.
www.hausderkunst.de