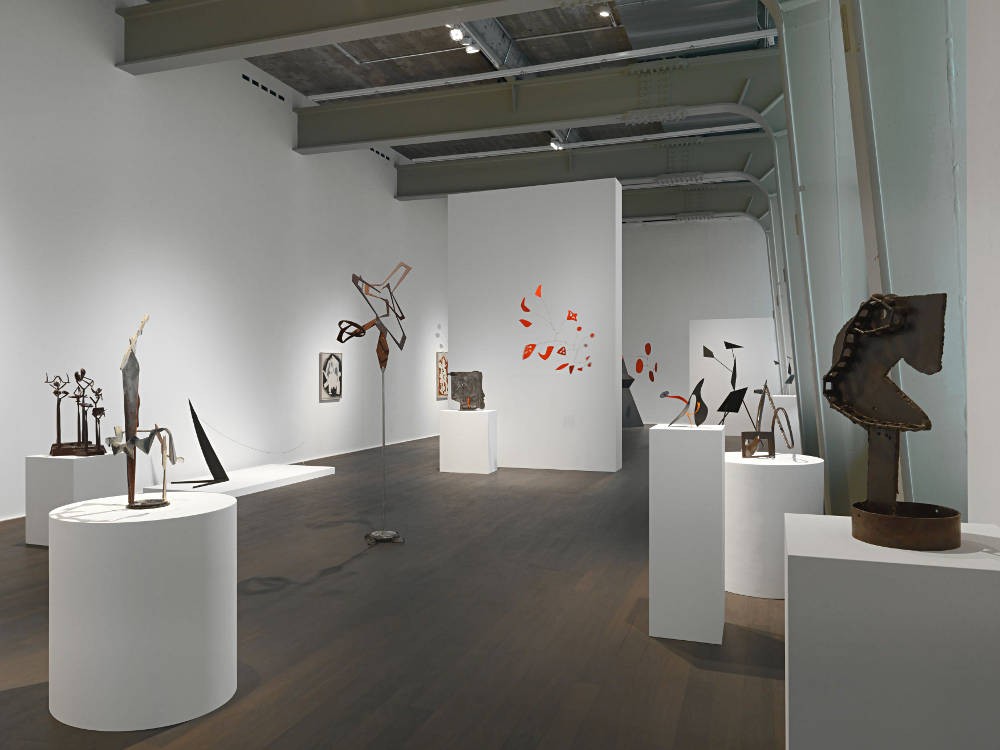 To coincide with Art Basel 2017, Hauser & Wirth Zürich presents an exhibition uniting two great figures of 20th- century American sculpture: Alexander Calder (1898 – 1976) and David Smith (1906 – 1965). Realised in close collaboration with both the Calder Foundation and The Estate of David Smith, ‘Alexander Calder / David Smith’ explores the artists’ mutual resolution to test the limitations of traditional sculpture and redefine the parameters of abstraction in three dimensions. More than the simplified conceptions of the artists – Calder, the ingenious extrovert who commanded the Parisian avant-garde and set the simplicity of abstraction in motion; and Smith, the man of iron isolated on a mountain top, a constructor of enigmatic, wildly diverse ciphers who gave three-dimensional form to the Abstract Expressionist generation – the exhibition, enriched by the dialogue between these two modern masters, sheds light on the deeper complexities of their achievements. The presentation spotlights both intimate and large-scale works across four decades and illuminates how, over the course of their careers, both artists asked many of the same questions that challenged the assumptions of what sculpture could be, but answered them with wildly different solutions in pursuit of their own personal aesthetic identities.

In 1962, both Calder and Smith were invited by the Italian government to participate in the fourth Festival of Two Worlds in Spoleto, Italy. Given access to a decommissioned steelwork in the Genoese district of Voltri, the opportunity sparked a creative surge of activity for Smith, resulting in the creation of 27 sculptures in just 30 days, assembled from scrap metal and found objects from the abandoned industrial complex. Calder’s contribution to the festival was ‘Teodelapio’ (1962), a black-painted stabile over 58 feet tall and still in situ today. Exhibited across Spoleto, this was one of the first shows to position the two artists alongside each other. On reflection, this marked a time when both artists were at the peak of their careers having tapped into the tensile strength of industrial metal to create objects so radical and dynamic – that their configurations seemed to verge on the impossible. Since then, Calder and Smith have rarely been exhibited in dialogue with one another.

Both Calder and Smith challenged the assumption that mass was essential to sculpture. They mastered the visual language of painting and drawing – use of line, two-dimensional planes and colour – and, blurring the boundaries between drawing, painting and sculpture, created innovative and spirited new work. The more intimately sized works in the exhibition resonate with the idea of ‘drawing in space,’ a phrase coined by critics in 1929 to describe Calder’s wire sculptures. Calder’s ‘Red Flowers’ (1954) is a hanging mobile in which the artist’s archetypal abstract elements, some perforated, coalesce into an organic composition. Evoking the tradition of floral still-lifes, Calder nonetheless injects his sculpture with motion and a sense of life. Smith’s ‘Swung Forms’ (1937), a delicately balanced composition of welded steel, testifies to Edward Fry’s observation that, ‘Line is used in Smith’s sculpture as in his drawings, as form reduced to its essence, as contour, and as gesture for its own sake’. The curious and elegant work, balancing biomorphic form and linear structure, fuses reference to surrealist content with active gesture that, a decade later, would become the hallmark of the New York School.

Many works, including the large-scale works on view, highlight how both artists used paint to transform the viewer’s perception of three-dimensional objects. Although painted sculpture was not a new concept, it was an unusual practice at a time when ‘truth to materials’ represented the standard. Calder’s standing mobile, ‘Untitled’ (1967) embodies the artist’s approach to colour in his oeuvre, the boldly painted discs of cobalt blue and red demonstrating the harmony that defined his practice. Meanwhile, in ‘Zig I’ (1961), Smith unifies the surface of his monumental, tessellated sculpture with feathery black brushstrokes over russet tones, harnessing the gestural vigour of the artist’s fellow Abstract Expressionists.

While Calder used colour to heighten the disparity in a composition – as seen in two untitled sculptures from 1936 and 1943, which demonstrate the artist’s masterful use of a polychromatic palette executed in intersecting planes – Smith used the painted surface to underline the structural complexity of the sculpture. With its painterly elements of dappled green, ochre, yellow and brown, ‘Untitled’ (1954) emphasises Smith’s commitment to the visual nature of sculpture, and to breaking down the boundary between the media of painting and sculpture. For both artists, the use of paint on metal challenged the viewer to experience their relationship to the sculpture in new and distinct ways.

The work of Calder and Smith also proposed a new relationship between sculpture and the space it inhabits. Using steel and iron they capitalised on the availability and scope of industrial materials to expand the scale and weight of their sculpture, which in turn found its home in both natural and urban landscapes. In creating a new scale for sculpture they encouraged the art form to be viewed in the context of its material surroundings, literally transforming a viewer’s perception of a plaza or hillside. They also insisted that sculpture be more involved with the viewers’ sense of time – sculpture as a performative medium to be physically experienced, not just a static object to be looked at. While Calder’s mobiles are distinguished by their responsiveness to wind and touch, conversely his stabiles and standing mobiles focus on the concept of tensile stress and stability, yet still resonate with energy. ‘Extrême porte à faux III’ (1969) is one such example. Though firmly anchored by a robust black metal base, the long arcing horizontal wire appears insufficient to bear the weight of the mobile elegantly dangling from its tip. It exemplifies tension arcing upwards towards the sky, calling into question the laws of physics while flaunting Calder’s compositional genius. The small suspended mobile is a magical counterpoint so slight that it invites closer inspection to appreciate its brilliance. In Smith’s steel ‘Construction on Star Points’ (1954 – 1956), the gestural vigour and torsion of the geometric constellation evokes a dynamism and sense of upward motion that belies its static nature. With its mix of burnished stainless steel and painted steel, the work is an example of the artist’s notion of sculpture as a multi-faceted image penetrated by space – as the viewer moves around the sculpture, the work continually evolves, with each new angle framing a new image. For both Calder and Smith, sculpture was to be viewed in connection with the surrounding space and the body.

On the occasion of this presentation, Hauser & Wirth Publishers will release ‘Alexander Calder & David Smith’, a new catalogue with texts by Elizabeth Hutton Turner and Sarah Hamill, as well as photographs by Ugo Mulas, who met both sculptors in Spoleto, Italy, in 1962, and continued to document them throughout his life.
www.hauserwirth.com/