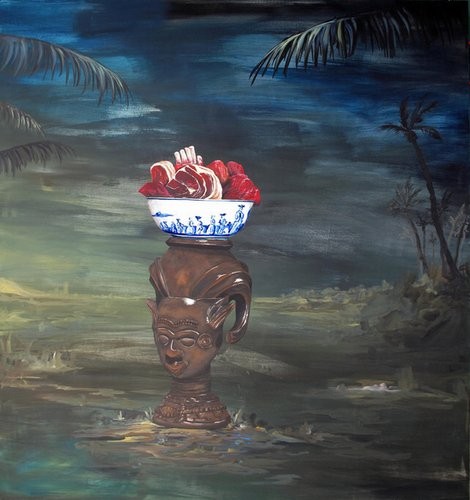 Hauser & Wirth Zurich is delighted to announce its first solo exhibition of works by London-based artist, Djordje Ozbolt. The exhibition will feature a selection of Ozbolt’s large and small-scale paintings replete with intricate detail and satirical humour.

Works such as ‘Postcolonial Discourse’, which portrays a Delft bowl heaped with raw meat balanced on the head of an African sculpture in a tropical yet gloomy landscape, raise questions surrounding culture, colonialism and identity. Meanwhile ‘The Madness of Comrade Lenin’ shows a traditional portrait of Bolshevik leader Vladimir Ilyich Lenin painted with a muted palette. In contrast to the serious expression and gravitas of Lenin, a Communist flag and an acid-house smiley-face are super-imposed on to the subject’s pupils. Both canvasses are exemplary of Ozbolt’s witty and unconventional approach, which results in collage-like images. In his work Ozbolt merges experiences from his frequent travels with subject matter from a vast array of references ranging from religious iconography to pastiches of still lifes; from political propaganda to pop-culture and kitsch. Seemingly incongruous symbols are seamlessly melded in Ozbolt’s fantastical paintings, merging diverse sources into a single compact, and sometimes macabre, narrative.

Ozbolt has described his artistic process as ‘restless’. His work gives him the freedom to effortlessly transition between different techniques, styles and topics with surrealist flair, creating his own distinct and darkly comical image of the world.
www.hauserwirth.com/