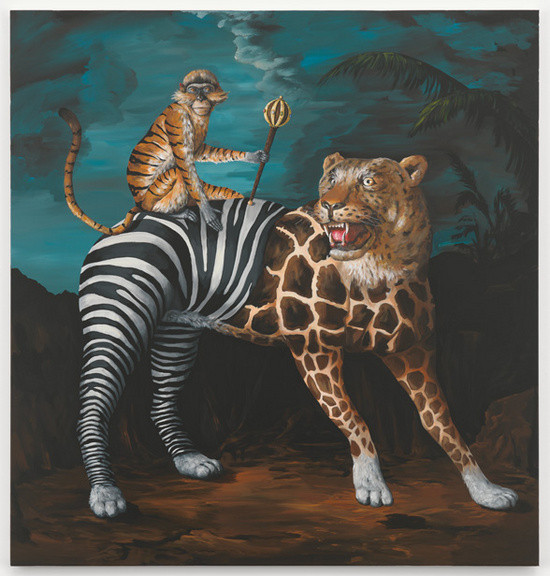 Hauser & Wirth is proud to present ‘Who Say Jah No Dread’, an exhibition of paintings and sculptures by Djordje Ozbolt. These new works combine Ozbolt’s impressions from his travels and personal experiences with iconography from different cultures and found images, all overlaid with the artist’s signature sharp wit and humour.

The centrepiece of ‘Who Say Jah No Dread’ is a totemic sculpture of animals stacked one on top of the other painted in rasta colours of black, red, yellow, and green. Featuring a dove perched on the extended finger of a chimpanzee, sitting on a kudu, on top of a cheetah, all resting on the back of an elephant, this work is a veritable menagerie in a riot of colour.

Ozbolt’s new paintings picture exotic settings with vibrant blue skies and dense, tropical foliage. The paradisical landscapes are populated by surreal creatures, such as a hybrid beast with a tiger’s head and a half-giraffe, half-zebra body, and animated African fetish sculptures shown dancing to Leonard Cohen’s 1984 hit, ‘Dance me till the end of love’, or gazing into the sunset in a romantic embrace.

In his paintings, Ozbolt has appropriated a wide variety of imagery from Botticelli’s ‘The Birth of Venus’ and the traditional still-life genre to depictions of the biblical story of Judith beheading Holofernes.

The collision of traditional European genres with stereotypically African motifs continues in Ozbolt’s series of pseudo-portraits, ‘Gentlemen of Ngongo’. Set against neutral grey backgrounds and wearing the aristocratic clothing of the Elizabethan era, each of Ozbolt’s subjects has an African mask for a head. Despite their frozen expressions, the costumes combined with the ornamentation and details of the masks lend each of the ‘Gentlemen of Ngongo’ a unique character.

The masks and fetish sculptures in these paintings are translated into three-dimensional form with Ozbolt’s new sculptures. Using mass-produced and kitsch ‘African’ objects that the artist purchased from flea markets and street vendors, Ozbolt’s series of fetish sculptures are adorned with the trappings of contemporary consumer culture, such as car tires and the hood ornament from a Mercedes Benz.
www.hauserwirth.com/