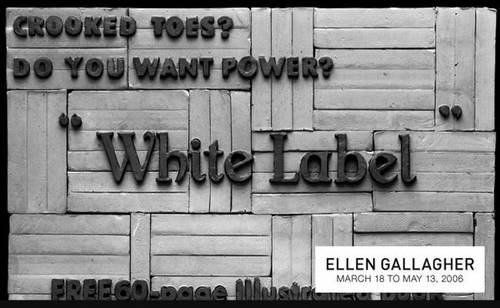 
Ellen Gallagher’s art charts the contours of worlds both fantastic and unimaginably real. A claustrophobic closed system she presents us with, where minstrel-show ephemera are reconstituted in oil and ink; the disembodied eyes and lips set in motion as they perform against the grid of penmanship paper she collates into her large scale paintings. The minutiae of detail and the magnitude of the canvas invite a reading both close to the canvas and from afar. This fluctuation in scale between the miniature and gigantic, overwhelming and controlled, has been compared to map making or a miniaturized version of the gigantic. But, rather than the static overview of a map, Gallagher has described her mark making as "notes towards something". More akin to the process of navigational charting, hers is a working grid. Evolving out of the language experiments of Bert Wllliams and Gertrude Stein, Gallagher's work incorporates repetition and revision to alter the familiar into something uncontainable and inscrutable. As the delimited signs are revised and re-emphasized, the threads between them become more expansive and gluey. Through her calligraphic insistence, Gallagher builds a cosmology of signs whose associations are multidirectional, its incarnations varying in tone depending on context: now menacing, now playful.

This is particularly lucid in Gallagher's DeLuxe, in which the pirated print becomes her medium, featuring recurring characters centred on archival material and advertisements Gallagher has culled from such mid-century "race magazines" as Sepia, Our world and Ebony. Magazines that Gallagher sees as having been quite radical during the early half of the 20th century. Densely mapped and chaotic, the only editorial criteria seeming to be a voice to African-Americans. Stories by Richard Wright and James Baldwin, alongside interviews with Haile Selassie, articles revealing the Tuskegee experiment where government doctors experimenting on African American subjects left scores of poor, mostly illiterate, Alabama farmers untreated for Syphilis, next to slasher stories and huckster advertising clamoring with promises of relief to a plethora of "ills" – acne, dark skin, tired feet, inappropriate hair. This seemingly contradictory level of consciousness between the articles and the advertisements appeals to Gallagher's own considerations of race, which she sees as an act that is both intentional and performative -– where performative suggests a dramatic and contingent construction of meaning. In DeLuxe, Gallagher takes the ads for wigs-"New Skinatural" and "Wiglets by Medalo"-collages, cuts and paints them over, using materials as varied as plasticine, velvet, toy eyeballs, and coconut hair grease. Often she constructs masks over faces to figure the boundary between human and inhuman, but also to recast the difficulty of identity. Her introduction of the mask can also be seen in relation to the ambivalent use of the African mask as both decontextualized object in early 20th century art and re-mastered in the blackface performances of Bert Williams.

Ellen Gallagher (b. 1965, Providence, Rhode Island) studied at Oberlin College, OH (1982-84); Studio 70, Fort Thomas, KY (1989); School of the Museum of Fine Arts, Boston, MA (1992); and at Skowhegan School of Art, ME (1993). In 2000 Gallagher was awarded the American Academy Award in Art and in 2003 was selected for the Venice Biennale. Her recent solo museum exhibitions include; DeLuxe, Whitney Museum of American Art, NY (2005); Murmur and DeLuxe, MOCA, Miami (2005); and Ichthyosaurus, The Freud Museum, London (2005). Forthcoming exhibitions in 2006 include: Infinite Painting, crated by Francesco Bonsai at Villa Manin/Codroipo, Udine in April, as well as a solo exhibition at Hauser & Wirth London in June. Lastly, Gallagher has been short-listed for the Smithsonian’s 2006 Lucelia Artist Award - an award that acknowledges American contemporary visual artists under the age of fifty. The artist currently lives and works in New York and Rotterdam.