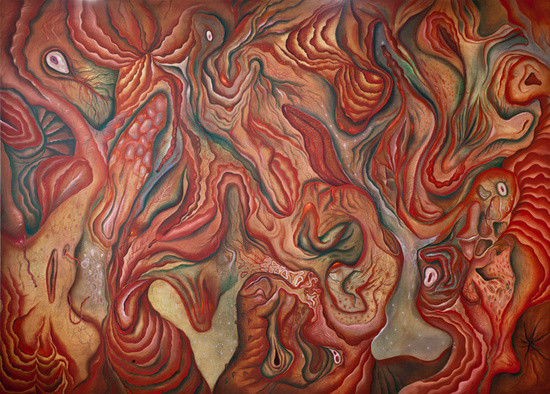 Hauser & Wirth opens the year with Jakub Julian Ziolkowski’s exhibition ‘Raw Thoughts’. In these new works, the young Polish artist invents a surreal and transgressive universe that is both foreign and familiar, with forms and creatures that appear to have surfaced from the wildest of dreams and nightmares.

The exhibition draws the viewer into Ziolkowski’s world, inhabited by bizarre hybrids of flesh, organs, tentacles, and giant eyes. The references to art history in his works are unmistakable, whether to the grotesque masks of James Ensor, the pictorial idiom of Philip Guston and Henri Rousseau, or the visions of heaven and hell of Hieronymus Bosch.

One series of paintings depicts the life and crucifixion of Bananus, or as Ziolkowski describes, ‘the modern pop-religious king of the new city in a new century, born in a cheap hospital, who died young’. The banana appears in this cycle as a recurring prop or, at times, as the crucified martyr himself. Ziolkowski’s depictions of classic religious scenes like the Crucifixion or the death of Saint Sebastian criticise and confuse through their combination of familiar motifs and such unexpected features as tattoos and trash.

A prominent theme in Ziolkowski’s works is the human body: flesh, orifices, organs, intestines, hair, arteries, and veins. Out of these he creates planets, surreal landscapes and new life forms.

Some of Ziolkowski’s titles are given in Esperanto, an artificially constructed language developed in the nineteenth century by the Polish ophthalmologist and linguist Ludwig Lazarus Zamenhof. ‘Paradizo’ presents a vulva through which the viewer can catch a glimpse of a paradisical landscape with palms, a beach, and a volcano. In this work, the female can be both the viewer’s gateway in to paradise and, like Eve, the one who shuts them out of it.

In the second section of the show, Ziolkowski presents asymmetrically arranged wooden pedestals on which small paintings and sculptures are placed at eye level, recalling model stage sets. Each stage is devoted to a single theme, such as allergy and diet or self-portraiture.
www.hauserwirth.com/