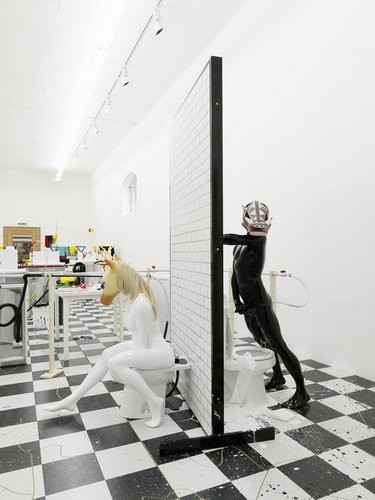 Paint, as Richard Jackson uses it, is liquid and libidinal, unruly and projectile; the spurting lifeblood of an overly cultivated art form and a fluid to be funnelled, pumped and squirted. Since the 1970s the West Coast American artist has mounted an intensely visceral humorous interrogation of painting that combines the heroic and the slapstick, systematised procedure and extreme disorder. He has expanded the activity of painting, abandoning its conventional tools for machines such as pumps, vehicles and even rifles to make the work.

Jackson is showing two expansive installations at Hauser & Wirth Zurich. Laundry Room, in the ground floor galleries, has been set up as a clothes cleaning space with adjacent bathroom and kitchen. Ten washing machines and a compliment of dryers have been installed and used, their washing-powder substituted for paint. Three of these contain the primary colours, which are piped into and churned in three other washers to form the secondaries: green, purple and orange. The remaining machines mix the paints again, their pigments becoming ever dirtier, darker and finally black. Viewers see the aftermath of this deviant laundering operation: clothes caked in pigment stacked by the artist on to tables, piles of mechanically produced paintings. The piece continues Jackson’s series of ‘Rooms’, which begun with Bed Room (1976 – 82). Richard Jackson had constructed a real-life scale bedroom, which led the curator Walter Hobbs to assess it as ‘the most extreme drenching, splatter and whiplashing of paint I’ve ever experienced ... “action painting” taken to its literal extreme.’ More recently, The Maid’s Room (2006 – 07), a re-creation of Duchamp’s Étant donnés, featured an exposed, spread-eagled nude clutching a vacuum cleaner re-designed so that it sprayed out paint.

Just as Jackson uses everyday machines to deconstruct and debunk the traditional high-mindedness of painting, he similarly combines crass cultural stereotypes with homages to icons of art history. Populating the Laundry Room and its suite of adjoining spaces are a cast of un-PC characters: men whose heads resemble a cross between a boar’s snout and an African mask, and women with the heads of ponies. Involved in a variety of acts of ablution, one is seen in the bath, a three-dimensional revamp of Jacques-Louis David’s The Death of Marat.

The upstairs gallery houses Upside Down Room, a kinetic installation Jackson made in 1996 but which has never been shown before. This is a space of its own with two sets of walls, the outer made of black and white striped paintings, the inner of steel perforated with tiny circles. As the viewer enters the piece the outer walls turn by 180 degrees disturbing their orientation. Compounding this experience are works such as Upside down female pony head and Upside down male pig head, bronze casts of sculptures that have been inverted and squashed beneath the weight of their pedestals. Upstairs the exhibition also includes Ain’t Painting A Pain, a neon script whose slanging statement of anti-sublimation flashes within the single word ‘Painting’ as though self-evidently true. As his friend Paul McCarthy has written about him, Jackson sees painting as ‘a job resembling construction’, or, to use his own characterization of art making, it is simply ‘unusual behaviour.’

Richard Jackson was born in Sacramento, California in 1939. He has been internationally recognised since ‘Helter Skelter’ (1992) at the Los Angeles Museum of Contemporary Art. Recent solo shows include Galerie Georges-Philippe & Nathalie Vallois (2007), Hamburger Bahnhof (2006). An earlier major presentation of his installations 1970-1988 took place at The Menil Collection, Houston (1988). His work has featured in numerous group exhibitions including the 48th Venice Biennale (1999) and the fourth Lyon Biennale of Contemporary Art (1997), as well as ‘Iconoclash’ (2002) at ZKM, Karlsruhe.
www.hauserwirth.com/