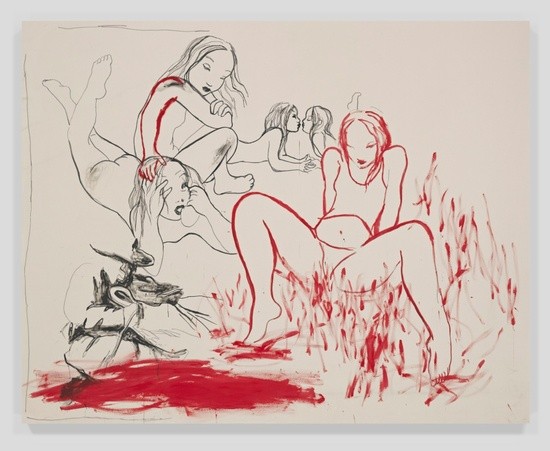 Hauser & Wirth Zürich is pleased to announce an exhibition of new chalkboard paintings by Rita Ackermann. This body of work was presented for the first time at Sammlung Friedrichshof, Austria in 2014, and a second series was shown later the same year at Art Unlimited, Art Basel. The works in this exhibition are a step further in Ackermann’s investigation into the deconstruction and disappearance of a pictorial language. Ackermann’s new compositions occupy a space between the figurative and the abstract, where human forms simultaneously disappear and re-emerge in traces of chalk dust.

Process is intrinsic to these paintings. Ackermann primes the canvas with traditional chalkboard paint before drawing out a figurative scene in chalk. The drawings are then partially washed away in vigorous sweeping gestures that oscillate between the visible and invisible, revealing only limited emphasis on method, subject and production. The repetitive steps of layering and erasure cause the chalk lines to dissolve in a cyclical process through which new abstracted images and shapes emerge. These are then further overworked with spray paint, prior to a final fixative seal.

Ackermann’s earliest works, created between 1993 and 1996, such as ‘Get a Job’ (1993) were the point of departure for the body of work in this exhibition. The figures in these early paintings are classically composed in idyllic scenes that convey serenity after a violent act. Here, the figures from Ackermann’s early works are the foundation for the chalkboard drawings on the surface of the paintings. The more these chalk drawings are erased, the more visible they become, resulting in a state of flux.

Rather than abandon figuration for abstraction, Ackermann instead aims for the liminal divide that lies between the two. She presents contrasting pallets and pigments and a constant shifting between systematic and accidental lines; her controlled gestures create a script in reverse.