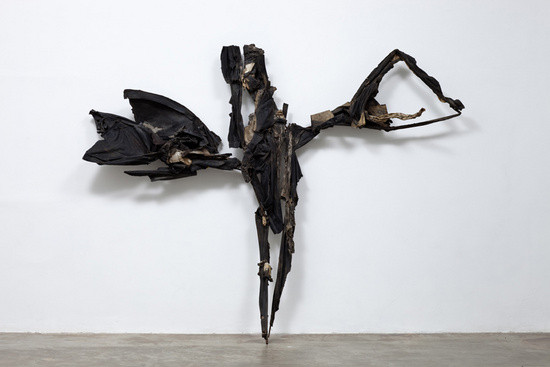 Hauser & Wirth Zürich is proud to present ‘The Historical Box’, a group exhibition curated by Mara McCarthy, director of The Box, a Los Angeles gallery whose ambitious programme focuses on presenting artists that have previously had little formal recognition in the American art world. The exhibition features sculpture, drawing and photography by influential American artists including John Altoon, Judith Bernstein, Simone Forti, Wally Hedrick, Robert Mallary, Barbara T. Smith and Stan VanDerBeek, and will be accompanied by artist talks, performances and film screenings. ‘The Historical Box’ brings together a collection of works created during some of the most turbulent political and social times in American history. These works are introduced to a new audience, bringing them back into today’s ‘art consciousness’ and reaffirming their relevance in contemporary society.

The centrepiece of the exhibition is Wally Hedrick’s ‘War Room’ (1967 / 68 – 2002). First made as a response to the Vietnam War, ‘War Room’ is constructed from eight large canvases, which Hedrick referred to as ‘wounded veterans’. These canvases are painted black and bolted together to create a room into which viewers could walk – immersing themselves in a dark, contemplative space. Since its creation, Hedrick revisited ‘War Room’ twice – re-painting the canvases black for both the Gulf War and Iraq War.

Judith Bernstein will present large-scale works including ‘HORIZONTAL’ (1973) and ‘Supercock’ (1966). Resonating with the feminist art movement and scatological graffiti, Bernstein’s works critique both political and sexual society, as well as the art world decorum of the sixties and seventies. ‘Supercock’ is part of a series of works inspired by bathroom graffiti at Yale School of Art, where Bernstein was one of only three female graduate students. The work depicts a superhero flying through the air, weighed down by his exposed, giant penis (nearly twice the size of his body). ‘Supercock’ is a comical critique of the male-dominated art world, a world into which Bernstein and many other female artists were just beginning to break.

Important works by Robert Mallary, including ‘Jouster’ (1960), ‘Flight 16’ (1961) and ‘Harpy’ (1962), will be on view at Hauser & Wirth Zürich. Mallary’s works are dark, sometimes figurative sculptures that take their inspiration from classical themes. ‘Harpy’, named after the violent, mythological creature with a human head and bird-like body, is a tattered, winged figure, constructed from old tuxedos ripped and stretched over thin steel rods and frozen in polyester resin. The large, looming figure teeters on a pointed base, presenting the creature as simultaneously threatening and vulnerable.

Simone Forti’s seminal Dance Construction, ‘Hangers’ (1961), will be on display with a live performance held during the exhibition’s opening on Friday 18 November. First performed in 1961, ‘Hangers’ straddles the boundaries of dance, performance art and minimalist sculptural installation. The work consists of ropes hanging from the ceiling in large loops. During the performance, these ropes are activated by performers who stand in the loops, whilst additional performers walk between them, creating a subtle swaying motion that is simultaneously dramatic and ethereal.

In conjunction with ‘The Historical Box’, Hauser & Wirth Zürich will host a number of events, including a guided tour with the curator, Mara McCarthy, and artists Judith Bernstein, Barbara T. Smith, and Simone Forti, followed by a screening of 16mm films by experimental filmmaker, Stan VanDerBeek on Saturday 19 November.
www.hauserwirth.com/