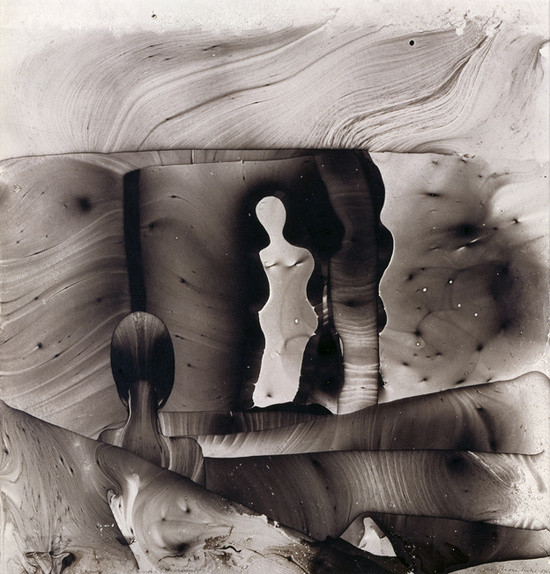 Singular and mercurial, the oeuvre of the Swiss artist André Thomkins (1930 – 1985) doesn’t fit neatly into any art historical category. The product of a capacious and supple imagination, it encompasses uncanny drawings, music, sculptures and wordplay such as anagrams and palindromes and new painting procedure. Celebrated as a ‘schwebsel’, ‘a floating soul’, by friends and collaborators including Daniel Spoerri, Dieter Roth, George Brecht, Richard Hamilton and Karl Gerstner, Thomkins turned every activity into an artwork, his methods woven from the matter of life. At Hauser & Wirth London, the first exhibition of Thomkins’ work in the UK, are ‘Lackskin’ paintings, the most vibrant and sensuous of all his creations. Made over the course of 30 years — from 1955 when he first discovered the technique until his death in 1985 — these epitomised the delicate interplay between chance and skill that animates all his art.
The Lackskins were all made by floating a coat of lacquer paint on the surface of water. Thomkins meticulously orchestrated the drift and settlement of the pigment, blowing, dripping, pulling and stirring the liquid then removing parts of the skin it forms with a fine brush. Allowing the lacquer to begin to dry into a semi-solidified skein, Thomkins then lifted the image up onto paper, rolling the latter in such a way as to rescue a positive of the design rather than its mirror image — a process so delicate and susceptible to the slightest motion as to leave trembling fissures across the resultant picture from moments when the artist paused. The technique depended also upon the containers used to hold the water, vessels that ranged from domestic items such as a soup tureen or a bath to tubs that were purpose built for the task. In spite of the homespun technique and the external contingencies courted in their making, Thomkins worked with painstaking precision, so that the content and mood of the paintings were finely calibrated:
“A drop or string of thick gloss paint trickles onto the water, it spreads and covers the surface. The forms this produces can be constantly changed, by means whose effects trigger an interplay between artificial and natural forces: when you blow on the paint, it drifts apart in the desired direction and dissolves into grey scales of photographic fineness, suggesting a plastic presence. With drops or strings of paint thrown or drawn onto the emerging painting you can then change the landscape.” (André Thomkins, 1966)
In exploring and harnessing the behaviour of water and lacquer, he arrived at works with startling vitality and extraordinary powers of evocation. Vivid blooms of colour interlace and yoke like bodily organs or outlandish landscapes. Their amorphous imagery suggests both the geological and the biological, the very old and the still to come: zygotes, protean life forms, flora and fauna seem to emerge from Thomkins’ masterful manipulation of fluid matter.
At Hauser & Wirth London both large-scale and small scale ‘Lackskins’ are on display. These include numerous early works, pieces from his Astronaut series — monotone, otherworldly forms created in response to the Sputnik shock of Russian space travel — and ‘Portraits’ that the artist made in the 1980s. In the basement visitors will hear music composed and played by the artist, while in the vault room a 1966 television documentary will show Thomkins talking about how he developed this painting procedure. Accompanying his actions as he makes one of the Astronaut pictures is the artists’ own experimental soundtrack, which Thomkins regarded as an aural translation of the works.
André Thomkins was born in Lucerne, Switzerland in 1930. He worked most of his life in Germany where he died in 1985. During his lifetime he exhibited little, preferring to work independently of institutions and galleries than actively pursue fame. Major exhibitions of his work occurred only in the last few years of his life, introducing his practice to a new audience. In 1989/1990, his extensive œuvre was shown in a retrospective exhibition in Berlin and Lucerne. In 1999, coinciding with the publication of the catalogue raisonné of his work by the Swiss Institute for Art Research, the Kunstmuseum Bern brought his work into focus again with the show, ‘Traumszene’ [dream scene]. Recent solo exhibitions include ‘André Thomkins. ́Sorti du Labyrinthe’ at Hauser & Wirth Zürich (2004) and ‘A.T. 3D. Die räumliche Welt des André Thomkins’ at Kunstmuseum Liechtenstein (2003).
www.hauserwirth.com