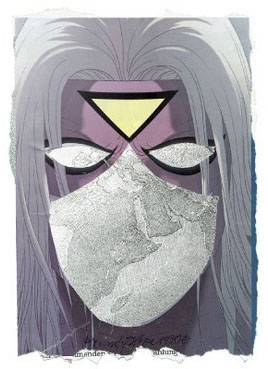 The pictorial worlds of Andreas Hofer are poetic, familiar and irritating at the same time: science fiction pairs off with art history, comic book heroes appear side by side with emblems of the Third Reich, dark shapes and light figures share the same canvas. The German artist draws sensitive and subtle scenes that are nevertheless sombre. Upon closer inspection, his colourful and dreamlike imagery threatens to tip over into its opposite – a nightmare. His subject matter is built up into a complex and diverse system of signs that includes traditional images, removed from the popular lexicon, then consciously distorted and expanded.

Almost all of the paintings, drawings and statements that Hofer produced since the end of the 1990s are signed "Andy Hope 1930". This alter ego stands for an interim person between the artist and his work. The name “Hope” radiates optimism, which is in direct contrast to the dark moods of his scenes or the historical landscape suggested by the date. With it, as Susanne Gaensheimer has remarked, Hofer ‘marks them as timeless or also implies the timelessness of his own existence. [...] it is the potential of this "new world" that is alluded to in transforming Andreas Hofer’s name into an American Andy Hope.’ (from the catalogue Welt ohne Ende (World without End), p. 11-12)

Andreas Hofer draws continued inspiration from the 1930s, the decade that witnessed Germany’s transition from the Weimar Republic to National Socialism, from democracy to totalitarianism. It was also marked by the development of film as the most powerful new tool of mass communication. Hofer has referred to the works of Werner Peiner, a successful artist in the 1930s who nevertheless fell into oblivion after the fall of the Third Reich. Hofer’s book Peiner Block is centred on the rejected works, integrating them into Hofer’s own. Bringing the forgotten artist back into consciousness, Hofer sets up a conflict with the visual language of fascism. He confronts its symbols with signs of modernism, comic strip or film in order to expose their subversive charismatic power and superficial appeal.

Andreas Hofer deliberately works in a variety of media, including painting, drawing, and collage, and connects these as an installation in a single atmospheric unit. He continually surprises with new combinations of media and experiments tirelessly with materials and different techniques of applying paint. In so doing, he develops a unique aesthetic that burns directly into the memory of the observer and operates in a way that is simultaneously crude and refined.

For “This Island Earth”, Hofer has made a 36-foot long painting, which forms the focal point of the exhibition. It will be shown alongside tall sculptures, which seem to have sprung directly out of a science fiction film, their impressive size reminiscent, too, of representations of the Egyptian pharaohs. In spite of the sheer classical beauty of the installation, it nevertheless arouses a feeling of suspicion.

Andreas Hofer’s subject matter brings various, sometimes controversial, themes together and creates connections that are filled with suspense. Unconstrained by possible misunderstandings, he mingles good and evil, mixes science fiction and history and presents sometimes provocative parallels. It is up to the observer to derive stories from the works - as well as to bear the tension created by them.

Andreas Hofer (b. Munich, 1963) lives and works in Berlin. He studied at the Academy for Visual Arts in Munich and then at Chelsea College of Art & Design in London from 1991 to 1997. Recent group exhibitions have included “Actionbutton”, Hamburger Bahnhof (2003); “Direkte Malerei”, Kunsthalle Mannheim (2004); “Made in Berlin”, ArtForum, Berlin (2004); “La Nouvelle Peinture” Allemande, Carré d’Art, Nîmes (2005); and “Les Grands Spectacles”, Museum der Moderne Kunst, Salzburg (2005). In 2005, the first solo museum exhibition of his work, “Welt ohne Ende,” was held at the Lenbachhaus Munich.

The exhibition is accompanied by a forthcoming publication produced by Steidl in conjunction with Hauser & Wirth. For further information and visuals, please contact Hauser & Wirth on +44 (0)20 7287 2300 or email: london@hauserwirth.com or Claire Walsh at Idea Generation on +44 (0)20 7428 4949 or email: claire@ideageneration.co.uk.