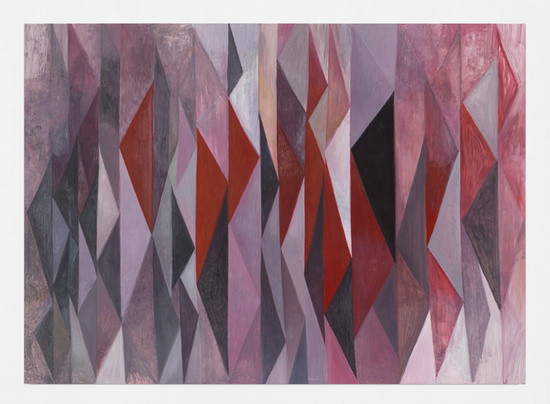 For the past two years, Argentinean artist Guillermo Kuitca has created an extensive body of large-scale paintings and meticulously detailed graphite works, which is presented for the first time at Hauser & Wirth’s Savile Row gallery. Shifting from gestural mark-making to acute linear precision and incorporating diverse motifs central to Kuitca’s practice – fragmented cartographies and architectural plans – the works explore many different histories, all linked together by Kuitca’s unique painterly language.

Kuitca’s expansive canvases dominate the North Gallery and immerse their viewer in what Robert Storr describes as the artist’s on-going exploration of the ‘monuments of modernism’. His dense paintings are covered edge to edge with dynamic slashes, creating a rhythmic, almost primal sense of urgency. Travelling across these mountainous, yet two-dimensional surfaces, set against a pallid grey background or even coursing over an unprimed canvas are brightly coloured cartographic lines. However, these guiding marks contradict their initial purpose; Kuitca has removed all city names and highway numbers and assembled elements from many different maps, presenting a maelstrom of dislocated information. These paintings push Kuitca’s earlier cartographic pieces to the brink of total abstraction and delve deeper into the resistance and collision of his angular terrain with the fluid movement of the painterly map lines.

In the South Gallery, shown alongside smaller canvases and experimental, intimate vignettes painted over wooden panels, Kuitca presents a suite of seven large-scale, graphite works. During the Enlightenment, the French philosopher Denis Diderot, with Jean le Rond d’Alembert and other scholars, undertook the collective, yet ill-fated task of compiling all knowledge into numerous volumes: the ‘Encyclopédie’. Kuitca takes marble floorplans from the ‘Encyclopédie’, manipulates these architectural plates, then painstakingly transposes each minute detail, replicating migrant splinters of information with an incomparable attention to detail. Kuitca once said, ‘I am interested in the major contradiction between a medium...which is so specific and partial, and the abyss of an enormous knowledge of things’. Kuitca’s manipulated plans straddle the boundary between ancient and futuristic. While the massive scale and intricacy pays homage to the demands of such a task, Kuitca sees in this suite an acknowledgement that technology is now bringing us closer to reaching Diderot’s originally unattainable goal.

The exhibition is accompanied by a publication which catalogues Kuitca’s entire new body of work. The publication features an introduction by Philip Larratt-Smith and a newly commissioned translation of Vivant Denon’s novella, ‘No Tomorrow’, originally published in 1777.
www.hauserwirth.com