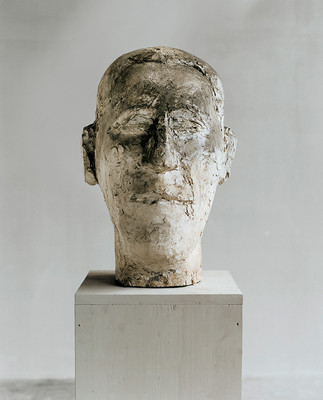 HANS JOSEPHSOHN’s sculptures are shy beings, 'self-enclosed figures' in the words of their maker, who keep their distance from the chatter of contemporary culture. Until recently the German-born artist was little known outside Switzerland where he has lived since 1938, yet his profound oeuvre is increasingly becoming recognised by a growing number of curators, artists and critics. According to Art in America, 'Josephsohn, at age 87, has recently been making some of the strongest work of his career and may well prove to be our most important figurative sculptor.'

Josephsohn’s art is devoted entirely to the human form, the classical theme of sculpture: standing, sitting and recumbent; as full or half figures, bodyless heads or reliefs in which figures are positioned in relation to one another. Formed out of plaster, they are then cast in brass. The artist has said of his figures that 'they must be enduring in their expression, in their stance' and his sculpted beings convey an intensity that speaks of stoicism and dignity in the face of suffering. For over six decades he has sought to find a language for sculpture that contains its past. Josephsohn’s early sculptures reveal a dialogue with the art and architecture of Egyptian, Assyrian and classical Greek antiquity, whilst the mysterious half-figures that he has made from the 1980s until the present day seem to belong to pre-history. Running through all of Josephsohn’s works is an insistent corporality, an acceptance of the irrefutable heaviness and materiality of the human body. For him there is no spiritual possibility and therefore no truth outside the human body, which must bear all of life’s injuries.

At Hauser & Wirth London, Josephsohn’s first exhibition in the UK, a selection of sculptures will be on display on four floors of the gallery. Dating from the 1950s to the present day, these allow the viewer to witness the gradual development of the artist’s practice. Slender, near-symmetrical figures that recall Egyptian stele made at the start of Josephsohn’s career will be shown alongside the extraordinary half-figures that he has been working on since the 1980s. The latter are vast, boulder-like forms in which physiognomic detail has become bleary and indeterminate. Solid yet amorphous, they seem suffused with buried feeling; to be on the verge of becoming, yet liable at any moment to revert back to inchoate matter. In the words of the art historian Gerhard Mack, his 'work proposes an art of relations that starts to question its validity as soon as it acquires its form.' It is an art that is riven with paradox, simultaneously summary and expressive, roughed-in and eloquent, caught between the momentary and the continual.

Josephsohn was born in 1920 to a prosperous Jewish family in Königsberg (Kaliningrad), then East Prussia. He travelled to Florence in 1938 to study sculpture then emigrated to Switzerland in the wake of fascist laws. He has lived and worked in Zürich ever since. There are two permanent installations of his work open to the public: Kesselhaus Josephsohn, an exhibition space and foundry outside St. Gallen, Switzerland; and La Congiunta, a small museum in the Southern Swiss Alps designed by the architect Peter Märkli, to whom the artist has been a longstanding key influence. Last year Ugo Rondinone curated a room around Josephsohn’s work as part of his 'The Third Mind' exhibition at the Palais de Tokyo and major exhibitions of Josephsohn’s work include retrospectives at the Stedelijk Museum, Amsterdam (2002) and the Frankfurt Museum of Modern Art (7 February – 6 April 2008).

A film about the artist, 'Josephsohn Bildhauer', directed by Matthias Kälin and Laurin Merz, can be seen in the gallery’s vault space.