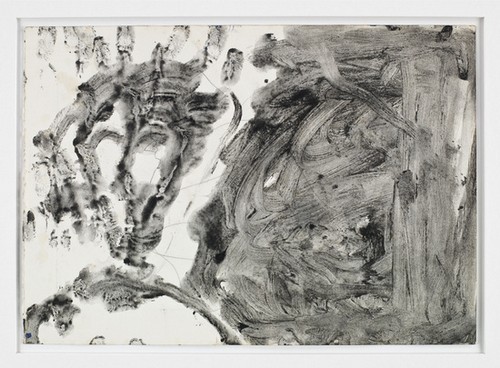 Through a multi-faceted practice that incorporated drawing, sculpture, installations and political activism, Joseph Beuys (1921 – 1986) radically re-conceived the role of the artist, aspiring to a ‘social sculpture’ capable of transforming both individuals and society. Drawing was the catalyst to all his works, considered by the artist as akin to thought and elevated into a living language of creation. The Lauffs purchased Beuys works in depth and the pieces in this exhibition formed an important focus of their collection.
The works on show upstairs at Hauser & Wirth London date from the 1950s, a period of crisis and introspection for Beuys that he considered to be essential to his development as an artist. ‘The things inside me had to be totally transplanted,’ he later explained, ‘a physical change had to take place in me, in which old experiences and phases of thought are cast off in order to permit positive changes.’ Working in solitude, Beuys drew prodigiously, searching for an alternative language for art that would be both earthbound and spiritual. His intense encounters with the page count as one of the most experimental and varied bodies of drawing ever produced. Sparse, precise pencil lines set up an exacting relationship with the sheet that supports them; pools of liquids and an extraordinary diversity of media suffuse the paper with symbolic meaning and a sculptural interchange between solidity and fluidity. The drawings instigated Beuys’s use of unconventional and organic material, exploring the dichotomy of warmth and cold that would, by the end of the decade, become his theory of sculpture.
Through a narrowly defined range of motifs — mostly of female figures, landscapes, and animals — Beuys conflated iconography from folklore, mythology, alchemy and the Christian tradition, inscribing these with personal symbolism. Women are promoted to heroic status in the artist’s idiom, representing a greater openness to the future, their supple, bending figures expressive of transformation and fertility. Typically, in Zwei Doppellakte (Two Double-Nudes), 1959, the pencil-outlined forms of two women become vessels for brown paint and gold bronze, the metallic pigment physically suggesting the conduction of energy. Aktricemit Filzwinkel (Actress with Felt Corner), 1958, shows a woman suspended in flight, lifting herself above a horizon line demarcated by a line of perforations in the paper, her environment becoming the physicality of the page she is drawn on.
Two landscapes on display, Kalksteingebirge (Limestone Mountains), 1956, and Eruption in der Lagune (Eruption in the Lagoon), 1957, exemplify Beuys’s use of visceral materials. In these fat, milk and chlorinated iron present the earth as a sculptural site continually altered through natural processes. Mutability was vital to Beuys. He sought to work through ‘an evolutionary process’, elucidating: ‘That is why the nature of my [artworks] is not fixed and finished. Processes continue in most of them: chemical reactions, fermentations, colour changes, decay, drying up. Everything is in a state of change.
www.hauserwirth.com