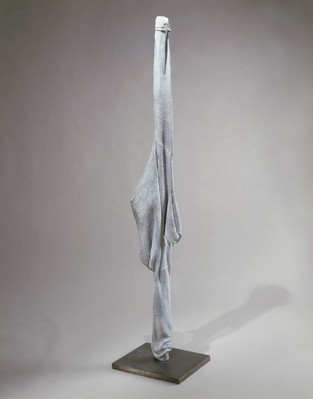 Hauser & Wirth is delighted to present an exhibition of new work in bronze, fabric, rubber, drawing and printmaking by LOUISE BOURGEOIS. This is the artist’s fifth solo exhibition at Hauser & Wirth and can be seen alongside a major Bourgeois retrospective at Tate Modern.

Bourgeois’ new works express both fragility and anxiety, and ultimately optimism. As is typical of her art, they seek a reconciliation of opposites, of hard with soft, geometric with organic, enigma with familiarity, and trauma with restoration: ‘I am trying to seek a balance between the extremes that I feel. I want to be reasonable.’ A series of standing sculptures (all 2007) continue the processing of the contents of her wardrobe as raw materials, a practice begun by the artist in the mid-nineties. In these new works, Bourgeois has re-stitched, draped and stuffed her clothes to create abstract forms, which she has then cast in bronze and painted. The resulting works are reminiscent of her early personages of the 1940s and 1950s. Bourgeois sees the folds, knots and orifices of these bronzes as suggestive of maternal nurturing and warmth, yet the sculptures’ whiteness and extremes of shape are also unsettling.

Gouache paintings continue Bourgeois’ preoccupation with the relationships of family, with coupling, pregnancy and child rearing. In works such as The Good Mother, The Pregnant Mother and The Hysterical Mother (all 2007) red figures are depicted with pendulous breasts, swollen stomachs and split heads. Their emphatically sexual characteristics are reminiscent of sculptures Bourgeois made in the late 1960s and early 1970s, which reduced the body of a limbless woman to her belly, breasts and neck.

Hauser & Wirth is also exhibiting Nothing to Remember (2004 – 2006), two 22 page portfolios of coloured images and text on top of hand-drawn music manuscript paper. It follows from an earlier book, Ode à l ‘Oubli (Ode to Forgetfulness), which Bourgeois made entirely out of fabric, using the linens and clothing remnants from her past. The words and images in Nothing to Remember are tentative and delicate, conveying the significance and fleetingness of memories.

LOUISE BOURGEOIS was born in France in 1911 and worked in America since 1938. She studied art at the École des Beaux-Arts, Paris, and for a time studied with Fernand Léger. Through 2008 and 2009, Bourgeois’ Tate Modern exhibition tours to the Centre Pompidou, Paris, the Guggenheim Museum, New York, LAMoCA, Los Angeles and the Hirshhorn Museum & Sculpture Garden, Washington D.C. Major solo exhibitions include MOMA, New York (1994), the inaugural Unilever commission at Tate Modern, London (2000), the Guggenheim Bilbao (2001), Palais de Tokyo, Paris (2002), Dia Center for the Arts, New York (2003), and the Whitney Museum of American Art, New York (2003). Bourgeois participated in Documenta 9 in 1989 and represented the United States at the Venice Biennale in 1993.
www.hauserwirth.com