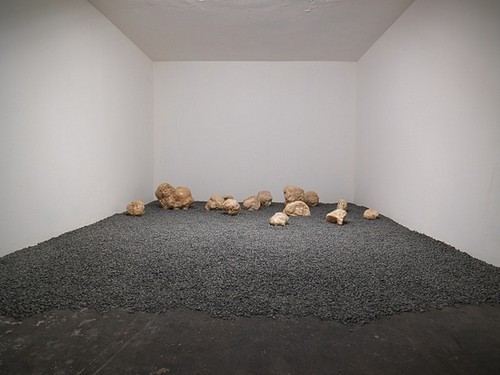 Hauser & Wirth presents After Awkward Objects; a coming together of works by Lynda Benglis, Louise Bourgeois and Alina Szapocznikow. The exhibition takes its inspiration from Awkward Objects, which took place earlier this year at the temporary space of the Museum of Modern Art, Warsaw. We hope this show will provide an insight in to the work of these influential and significant artists.

Born in Paris in 1911, Louise Bourgeois has lived and worked in America since 1938. The majority of works shown in this exhibition were originally made in plaster and then cast in plastic, latex and bronze. They represent an anthropomorphic landscape where the female body is reduced to a land of mounds, valleys and caves. Sometimes the breasts become the whole body, the duality of breasts in Tits (1967) becomes in Bourgeois’s words, ‘a double attitude to be like a mother, and to be liked by a mother ... the lips kiss like sucking. The whole person becomes a breast that stretches in order to give’. On show will be additional pieces from the same period such as the famous Janus, the suspended bronze phallic form imbued with gender ambiguity. Elusive and ambivalent in its references, Bourgeois leaves the interpretation of the work to the viewer.

Polish sculptor Alina Szapocznikow was born in Kalisz in 1926 to a Jewish family. Growing up in occupied Poland during World War II, Szapocznikow spent most of her adolescent years between Nazi ghettos and concentration camps. During the early stages of the war Szapocznikow worked as a nurse in two Jewish settlements, Pabianice and Lodz, where she witnessed the premature death of her father from tuberculosis in 1938. When the ghettos were disbanded in May 1942, Szapocznikow and her mother were sent together to three concentration camps, Auschwitz, Bergen-Belsen and Teresin.

At the age of 20, after surviving the horrors of the Holocaust, Alina trained as a sculptor and eventually worked in Paris. After being diagnosed with tuberculosis in 1951 she returned to Poland where she adopted a son and participated extensively in the Polish artistic scene. In 1962, Szapocznikow was offered a solo show in the Polish Pavilion at the Venice Biennale. The following year she moved back to Paris where she became friends with the art critic and founder of the Nouveau Realisme movement, Pierre Restany, and started to produce casts of her breasts, stomach and legs.

Szapocznikow documented her own body early in her artistic career in bronze and stone. In 1963, the artist began to combine fragmented body parts with revolutionary sculpting materials including polyester and polyurethane. Five years later in 1968, Szapocznikow was diagnosed with breast cancer and that same year began to make her ‘tumour’ sculptures using resin, gauze, crumpled newspapers and photographs. Through casts of the human body, the artist intended to document the impermanence of the body as a source of pain, trauma and truth. A Holocaust survivor, a Jewish woman with a history of sickness tattooed on her body and deprived of any prospects of maternity, Szapocznikow’s biography is integral to understanding her artistic achievement. Despite her early death in 1973 at the age of 47 from breast cancer and her detachment from the international art scene for the majority of her life, Szapocznikow can be placed amongst the greatest female artists of her time. She gave form to trauma, capturing the volatility of life, its paradoxes and absurdities and her artistic legacy can still be felt today.
www.hauserwirth.com