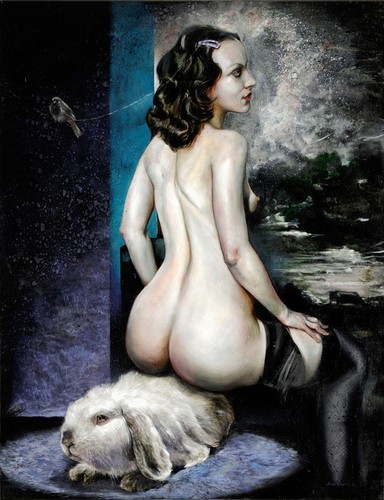 Hauser & Wirth presents the first UK exhibition of the Berlin-based artist Martin Eder. Populated by naked young women and saccharine fluffy pets, Eder’s semi-surrealistic paintings exude an engaging perversity. His scenarios have a nightmarish feeling and explore the uneasy relationship between fantasy and reality. ‘My paintings are actually battle scenes,’ Eder has said. ‘They are filled with murder and they are incredibly bloodthirsty.’

Eder will display a suite of new paintings across two floors of the Old Bond Street gallery. These are conceived as individual works, yet relate to and cross-reference one another, collectively revealing the parallel world that they describe. The viewer beholds three protagonists, each under the sinister protectorate of a ‘guardian’; their common situations suggest collusion, perhaps even telepathic communication between the characters. Rendered in muted tones, the canvases convey an ominous feeling and encroaching danger. Eder paints the twin emotions of fear and desire that reach out to the viewer. The loaded sexuality of the girls in his paintings and the feeling of exploitation these inspire, come coupled with the painterly dexterity of their making. Eder’s surfaces are complicated and compelling. Different modes of expression are assembled, ranging from realistic descriptive passages to marbled backdrops and high-toned graphic flourishes, all the while toying with depth and flatness.

Eder paints from photographs that he has taken, which together with his deployment of technique and illusory devices positions his persona at the centre of the narratives. Brought up in Catholic Bavaria, he has spoken of a ‘fundamentalist form of dedication’ that drives the dark symbolism and fervour of his works. His women are painted in styles that variously recall Botticelli, Cranach, Renoir and Manet, yet his subjects are undressed rather than nude. Their hairstyles, preened and made-up faces and soft-core poses parade a very contemporary attitude; their hallucinatory and claustrophobic predicaments are akin to those of the films of David Lynch. Eder’s works comment on the current health of society and of art, their fetishistic imaginary worlds reflecting the writings of Marx and Freud on the painted canvas. ‘I’m deliberately exposing myself to criticism that it is exploitation,’ the artist explains. ‘But on the other hand, isn’t arousal, if it’s present at all, a rebellion against death?’

To coincide with the exhibition at Hauser & Wirth, there will be a concert given by Martin Eder’s alter-ego Richard Ruin from 9 pm on 11 September 2009 at Hoxton Hall (www.hoxtonhall.co.uk).