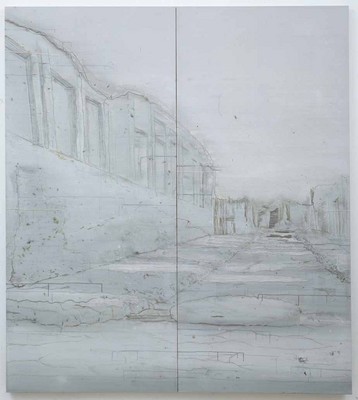 In co-operation with The Approach, Hauser & Wirth are pleased to exhibit new work by MICHAEL RAEDECKER. Raedecker practices an unusual kind of alchemy. He combines thread and paint to form shadowy netherworlds, steeped in atmosphere. Painted in glacial tones, his images have the leached-out quality of remembered dreams; their embroidered descriptions niggling the surfaces of the canvases like details that are stuck in one’s memory. Raedecker’s works are never innocent. They steal from such disparate sources as Dutch still life painting, photographs of modernist architecture, B-movie scenes and antiquated gardening catalogues to create a pictorial language that is both deeply original and disturbingly familiar.

Like old vinyl records, the surfaces of Raedecker’s canvases are scratched, their contents muffled and subdued. Deliberately infested with the hairs of fabrics and striated with scars, his paintings give off the allure and romance of age. Their subjects are often places in decline: un-peopled landscapes, ancient ruins, pallid villains from history and modernist bungalows. Raedecker depicts the classic genres of painting - landscape, portraiture and still life – as neglected and gone to seed in works that treat their heritage with both nostalgia and suspicion. Ambiguities and tensions are rife within his works, compounded by titles that jar creepily with what they represent - for instance calling such innocuous motifs as still lifes and decorative garlands of flowers ‘pornography’ and ‘paranonia’. Through the artist’s signature combination of thread and paint, two-dimensional imagery is pitted against three-dimensional objecthood, simultaneously demanding that the viewer believes in the illusory spaces they depict whilst acknowledging their fabrication. In some of Raedecker’s works paint drips have been carefully sewn onto the canvas, skilfully replicating marks caused by fluidity and chance; in others the artist has pushed acrylic pigment through the rough mesh of embroiderers’ linen so it forms thread-like squiggles of paint. Self-reflexivity is intrinsic to all of Raedecker’s works, enabling his successful combination of arch humour with skill, and bathos with a serious investigation into the contemporary state of painting.

At Hauser & Wirth London Raedecker’s works hover unsettlingly between realism and surrealism, literalism and abstraction. Bringing together ‘house’, ‘plant’ and ‘ruin’ paintings, the artist denies any one mode of reading his works or a simplistic thematic response. In one work to be exhibited, a large triptych depicting a ruin, the viewer is offered only the barest details, allowing them to piece the fragments together to form scenes in which their minds can wander. In contrast, paintings of plants leave little imaginative space for the viewer, dealing instead with the artifice of the genre. Their embroidered petals stand apart from the canvases, referring not merely to flowers themselves but to the long history of representation of flowers. Another large multi-part painting features washing hung on a line. It is so sparsely rendered that it resembles a landscape or modernist abstraction, yet its subject matter mimics the taut row of canvases that it is stitched on. These works recognise the complexities of our visual culture. They tap into a collective Western consciousness, revealing and reconstructing scenes that are somehow already known.

Raedecker was born in Amsterdam, Holland in 1963. He studied at the Rijksakademie, Amsterdam (1993 – 1994), and at Goldsmiths College, London (1996 – 1997). He has lived and worked in London since 1996 and was shortlisted for the Turner Prize in 2000. Major exhibitions include his presence in the Venice Biennale (2001) and MICHAEL RAEDECKER — show at The Douglas Hyde Gallery, Dublin (2005). His numerous solo exhibitions include Instinction at the Museum für Gegenwartskunst, Basel (2003), and forevernevermore at the Kunstverein in Salzburg (2004), as well as exhibitions at The Approach, London, Andrea Rosen Gallery, New York, and Hauser & Wirth Zürich.
www.hauserwirth.com