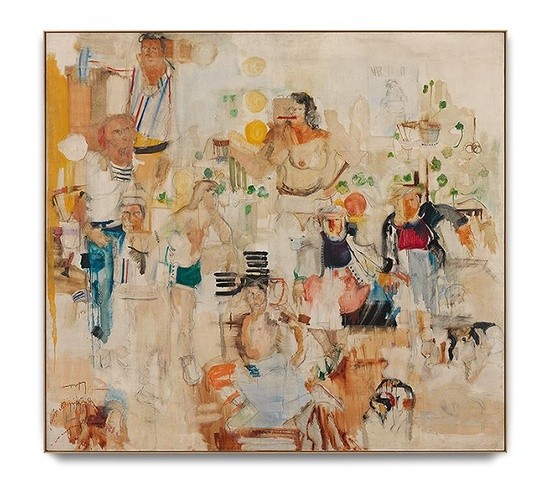 Throughout the autumn, Hauser & Wirth is honoured to devote all three of its London galleries to a presentation of works from the collection of Reinhard Onnasch. A celebration of Onnasch’s longstanding passion for art and collecting, ‘Re-View: Onnasch Collection’ is curated by Paul Schimmel, a post-war scholar and the newly announced Partner of Hauser Wirth & Schimmel. The exhibition focuses on the period between 1950 and 1970, which saw the birth of some of the most important artistic movements of the 20th century. It will feature significant works from the Onnasch Collection, including iconic examples of Pop Art, Fluxus, Colorfield, Assemblage, Minimalism and Abstract Expressionism from the New York School of Art, many of which have never been presented before in London.

‘This is an unusually diverse collection rich in its strong commitment to both American and European art. It shows a uniquely open-minded and exploratory approach to collecting that is incredibly rare and forms a stunningly diverse view of the currents and counter-currents of this era.’
– Paul Schimmel

Reinhard Onnasch (born in Germany in 1939) was one of the first Germans to open a gallery in New York following World War II. He introduced German artists such as Dieter Roth and Hanne Darboven to American audiences, American artists such as Morris Louis, Claes Oldenburg and Kenneth Noland to German audiences, and was one of the earliest advocates of the American artist, Edward Kienholz. Onnasch was attracted to the individual personalities of an artist’s work, a quality that led him to build an extensive and eclectic collection with a multitude of themes and stories coursing through it.

‘Re-View: Onnasch Collection’ begins in Hauser & Wirth’s Piccadilly gallery with an exploration of Assemblage, collage and the combine, looking specifically at the quasi-area between sculpture, the performative and the cinematic that these works occupy. The centrepiece of the presentation at Piccadilly is the work of the self-taught American artist, Edward Kienholz. Kienholz’s early, surreal sculptural assemblages highlight the artist’s penchant for wrestling with difficult subject matter and creating sharp social criticism. For example, ‘The Future as an Afterthought’ (1962) confronts the horrors of nuclear war by assembling a mass of dismembered baby dolls in the silhouette of a mushroom cloud.

In the American Room of the Piccadilly gallery, the rich tradition of Assemblage is further explored through works by George Brecht, Christo and Dieter Roth. Their work emphasises the banal, completely disregarding the boundaries between so-called ‘high art’ and everyday life. They embraced the accident and the unpredictability of their unstable materials, including food. Only the red caps peep out of Roth’s ‘Zwerge (Dwarves)’ (1970), a block of garden gnomes immersed in chocolate, a foodstuff once pleasurable that, over time, has become revolting.

The exhibition continues in Savile Row where it is divided into two sections. The north gallery focuses on the New York School of the 1950s and 1960s, including works by Clyfford Still made during what is widely considered to be his most influential period, when he moved to New York from California. A vanguard of the Abstract Expressionists, Still created insistently vertical compositions akin to the sublime works of Mark Rothko and Barnett Newman.

The north gallery will also feature artists such as Morris Louis and Kenneth Noland, artists associated with the next phase in the New York School of Art: Colorfield and geometric abstraction. The corners of Morris Louis’ monumental paintings from his iconic ‘Unfurled’ series (1960 – 1961) are framed with streams of unmixed paint, a testament to the notion of purity central to the Colorfield movement. Likewise, Noland’s early paintings on view at Hauser & Wirth draw upon European abstraction and the language of the Russian Constructivists using the direct application of colour seen in Morris Louis’ paintings.

The presentation in the south gallery explores the emergence and development of Pop Art, looking particularly at works by artists such as Jim Dine and Claes Oldenburg that pay homage to the painterliness of the New York School. These express a fascination with a popular culture defined by mass production and consumption and its presence in day-to-day life through magazines, advertisements and ordinary items. For example, Oldenburg’s ‘Model for a Mahogany Plug, Scale B’ belongs to the earliest group of the artist’s large-scale projects, magnifying everyday objects to fantastical proportions.

The candy-colour palette of the cartoon-like paintings of William Nelson Copley and John Wesley, also on view in the south gallery, are further examples of a post-modern investigation into the common object.

The final rooms of the exhibition look at Minimalist and Conceptual Art – two movements arising almost simultaneously with Pop Art – through works by artists such as Dan Flavin and Richard Serra. Two weighty, steel plates balance precariously, propped up against each other in the corner. The sculpture, Serra’s ‘Do it’ (1983), speaks to the formal geometric abstractions of Minimalist Art, whilst accentuating and re-framing the viewer’s experience of sculptural volume and space. ‘Do it’ brings the exhibition full circle. It shares an affinity of latent violence and danger implicit in Kienholz’s works and, like Kienholz’s work, speaks to the attitude of distrust from which American art of this period emerged, whilst expressing the vitality shared by these works.

Throughout the duration of the show, Hauser & Wirth will be hosting a varied programme of public events and educational screenings. For details on the programme, please visit the gallery’s website: www.hauserwirth.com.