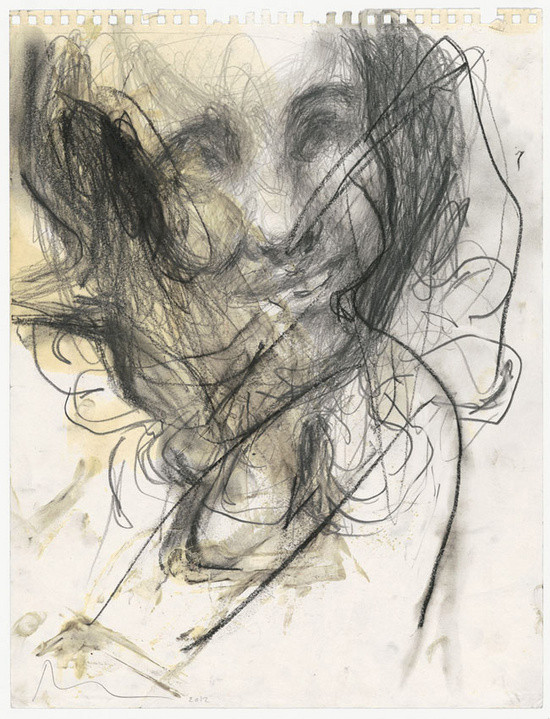 Hauser & Wirth is proud to present ‘Fire by Days’, an exhibition of the eponymous series of paintings and works on paper by New York-based artist, Rita Ackermann. ‘Fire by Days’, a title inspired by French poet Roger Gilbert-Lecomte’s ‘Vacancy in Glass’, began as an accidental spill of paint on the artist’s studio floor, which Ackermann mopped up using a Hungarian fire safety poster.

‘These paintings came to me from, or as, an accident: suddenly the forms and shapes of hastily cleaning up a mess of paint on a surface suggested something that wasn’t a figure or a face, but rather both, or abstract. This is how the first ‘Fire by Days’ images arose. I had no intention to make this picture. It was an accident.’

‘As Paul Virilio once said, “Sublimation of the hunt...the course of painting imposes a cleared surface, a sublimation of war”. The speed of the action demanded a pure surface in which I found the perfect image. To roll in complete freedom and depth in the desert; this is far more exciting than passing through a delimited course.’

‘I wanted to then duplicate the pure power of the accident and through this image, multiply its freedom. By repeating the elements of the raw creation of a “disaster” and failing to keep it from unintentional “learned” gestures, I succeeded at arriving at something that violently pushed itself between figuration and abstraction, pushing through to make itself completely free. This type of freedom in painting only arrives for mere seconds, or rather for an immeasurable amount of time, but reveals infinite perspective.’

‘In these paintings, the moment – that immeasurable amount of time while the artist is allowed to hold “the foot of God” – produces an image that carries itself through the surface, through its depth to open itself to the next work that will also attempt to stretch “the moment” of peace in constant war’.