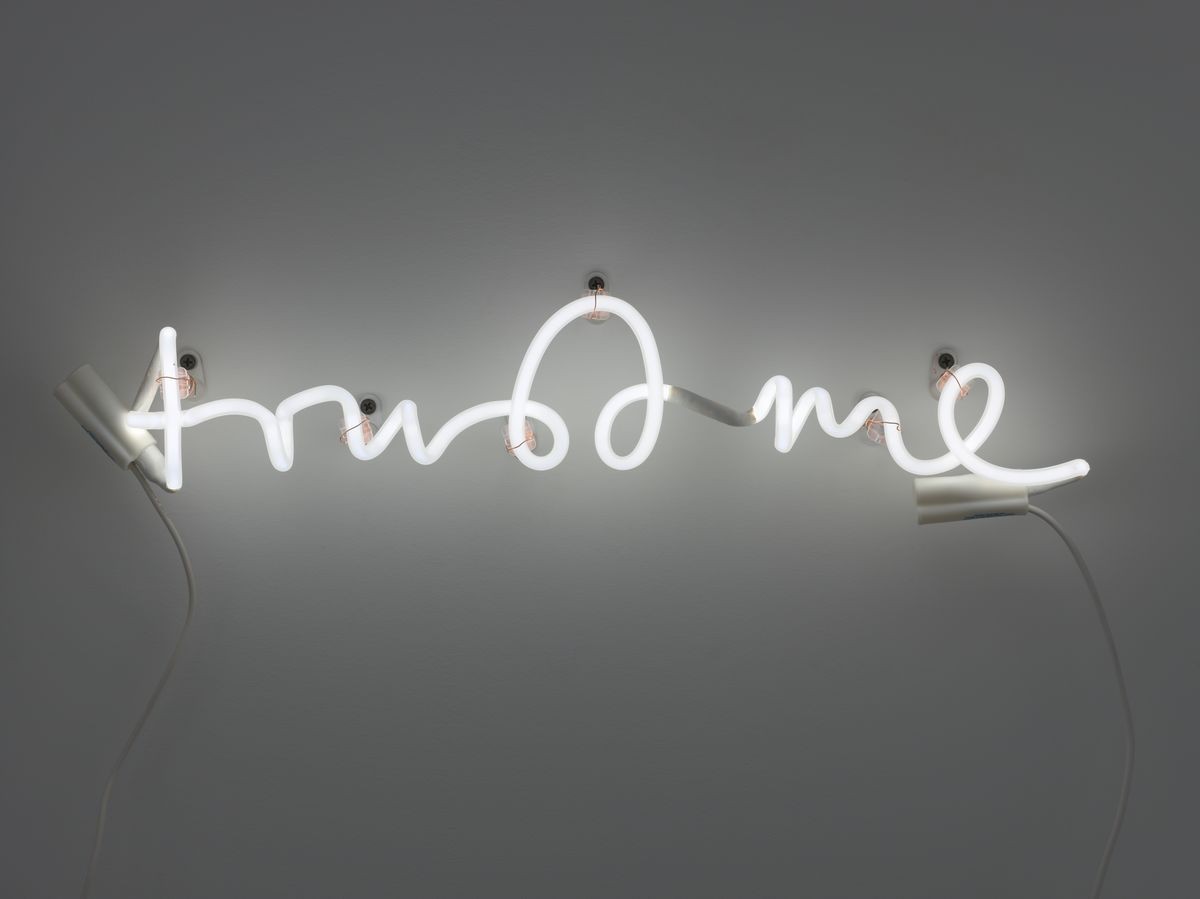 Referring to the address of Cabaret Voltaire – the birthplace of Dada in Zurich, Switzerland – ‘Spiegelgasse (Mirror Alley)’ presents the works of Swiss artists from the 1930s to the present day and is curated by Gianni Jetzer. Taking historiographical cues from the literal translation of the street name, the exhibition tracks art history not as an evolutionary process, but rather as a hall of mirrors in which artists’ practices encounter, reflect, fragment, and recombine through time.

These mirrored realities go back to the legacy of the Dadaists, formed in a city where artists like Hugo Ball and Sophie Taeuber-Arp shared company with modernist writer James Joyce. Joyce’s masterpiece, ‘Finnegan’s Wake’, was written in Zurich, and includes features of the Swiss city and culture as translated through the Irish writer’s pen (the city’s post office, Sihlpost, becomes ‘silly post’; a Swiss-German song’s refrain, ‘Min Vatter ischt en Appezeller’ (my father is from Appenzell), is transliterated into ‘fawthery eastend appullcelery’. This back and forth between the real and its subjective shadow, pieced together in a collage of the artists’ surroundings, forms the basis for this exhibition’s inquiry into the legacies of Dadaist and Surrealist Art. Evidently, the milieu of an overly rationalised Swiss society proved a breeding ground for an avant-garde defined by humour, nonsense, and subjectivity: qualities seen in the reflections and refractions of Swiss art to this day.

The fracturing of artists’ surroundings through translation and interpretation is one such method that has emerged from this legacy. The unframed paintings by Vivian Suter (a Swiss artist living in Panajachel, Guatemala, since 1982) are dependent on their surroundings. The artist particularly in tune with how her bright, layered, unstretched canvases inform and are informed by the spaces in which they are hung like tapestries. The ‘Big Vase’ (1985) by Fischli/Weiss (an artist duo who kicked off in Zurich’s DIY punk rock scene in the 1980s) meanwhile, transports and scales a domestic object to transcend the home into the realm of art. The enormous object, large enough to hold a human being, is stripped of its utility in both its size and its context. Its objecthood no longer important even in its immensity, the piece playfully touching on legacies of sculpture, painting, and the absurdism of Dada. Urs Fischer’s ‘The Big Easy Alias The Alternative Problem’ (1998/2000) acts as a window into the artist’s process and studio, utilising a set of drawings, photographs, and materials such as bark and sawdust to fill a large board. The photographs of Fischer’s studio and works in progress accompany a set of sketches reminiscent of André Masson’s Surrealist automatic drawings, the board as a whole acting as almost a theatrical depiction of the area between the artist’s vision and his immediate surroundings.

The play with and recontextualisation of typical scenes thus become important forms of art making to be read in the works on view. Daniel Spoerri’s ‘Tragédie Grecque’ (1987) utilises a found painting of an idyllic autumn road and landscape as its backdrop, with an old doll hanging from the frame. With its head pierced through and seemingly missing a leg, the raggedy doll recalls the titular form of Greek tragedy. The theatricality of the work coupled with the immobility of its actor becomes a movement in suspension, indicating either a withered or relaxed state. In her painting ‘Das aufgeschlagene Bett’ (the uncovered bed) Meret Oppenheim portrays the intimacy of a sleeping place at a time when the war in Europe was about to erupt. The empty bed becomes a place of recluse, but also a symbol of vulnerability and individual dreams.

The artist’s hand is literally present in the wallpapered wall of Fabian Marti, ‘End Egoic Mind’ (2010), on which his ‘Deep Egg’ and Pipilotti Rist’s handwritten neon sign ‘Trust Me’ (2016) are mounted. The two works offer conflicting yet complementary takes on intimacy, identity, and industry in a time of digital manipulation, embodying authenticity even through their absurdity. The context-less neon sign gives the viewer a carte blanche of trust, though whom and about what exactly is not clear. Still, the intimacy remains, propelled by Marti’s blown-up handprints behind it. The “artist’s hand” here is clearly seen, his identity residing not in brushstroke or method but rather in the unique forms of his palm- and fingerprints, their size and repetition absurdly serialising his identity. One might recall Man Ray’s famous photograph of Meret Oppenheim covered in ink next to a printing press, an image telling of the artist as a muse-object in others’ eyes.

Manon’s monumental room, ‘Salmon Colored Boudoir’ (1974), is a feminist reclamation and rejection of such objectification, its interior filled to the brim with elements used to stage photographs of the artist’s many personas. The work thus rests between autobiography and fiction, its private environment reminiscent of an actress’s changing room—the area of transformation, an interstice between the actress herself and her stage persona—or a post-feminist wunderkammer. André Thomkins’ ‘Gelbe Frau mit schwarzern Haar’ (1982) expands upon representation and identity through his abstract forms, painted in a meticulous process combining chance with manipulation. These forms combine to create pareidolic images – faces seen in patterns or objects – that are neither fully human nor entirely abstract. The ambiguity of representation is also interpreted in the lush, bright brushstrokes in Andro Wekua’s portraiture, which draws from the artist’s inner experiences of the outer world. This subjectivity is important in considering the realism of a work in an age of ubiquitous digital image-making, which is almost always altered in some form. In his work, Wekua fictionalises his own biography through his expressive painting in order to create new forms of subjective life; dream-like painting thus becomes, perhaps, a more authentic form of representation than photography.

These living yet inanimate forms define Swiss art from Dada to today, from Alberto Giacometti to Jean Tinguely to Urs Fischer. Works from the three artists are presented together, each forming a unique take on life in its absence. Fischer’s tongue-in-cheek ‘One More Carrot Before I Brush My Teeth’ (2001) is a sculptural exploration of non-human objects and their contingent lives, the work’s shoddily constructed washing machine supporting a foam skeleton seemingly arching its back in ecstasy. This merging of the skeletal symbol of vanitas with a domestic object creates a nonsensical contemporary still life, exploding the historical form to absurdity. Jean Tinguely’s dancing kinetic sculpture ‘La Jalousie’ (1961) similarly infuses a domestic object with life, the bead curtain motorised and shaking in anxiety to play off the titular pun (‘jalousie’ translates to either ‘curtain’ or ‘jealousy’). The work’s chattering beads recall xylophonic bones in a danse macabre, hinting at death while maintaining its playful nonsense.

Alberto Giacometti’s ‘Buste’ (1948), meanwhile, reveals multiple layers of life and representation as a painterly portrait of a sculptural bust of a man. The skeletal, zombie-like qualities of the painted sculpture is set in a background of a colour close to bronze, Giacometti’s well-known sculptural medium and the painted subject’s likely material. The work is almost a prefiguring of Baudrillard’s concept of the simulacra, the painting a representation of a representation. The layers reveal a surreal separation of lived and represented realities, its areas of exposed canvas further exposing the work as something in between full representation and abstracted art object.

Bringing the life of the in-between through to contemporary concerns, Emmanuel Rossetti’s ‘Quarry Bell’ series of prints (all 2016) and Urs Fischer’s early work about digitisation, ‘The Art of Falling Apart’ (1998), confuse physical and virtual realities. Fischer’s installation presents a collection of glasses on shelves, a chair, and a suitcase with clothes strewn about, all drawn on and gridded as if ready to be rendered digitally as wire frame models. The scene depicts a surreal interior landscape, further separated from their context in their digitisation; while they exist in physical space, they reference virtual objects and forms. In a similar manner, Rossetti’s series of digitally rendered prints of shiny modern bells reflecting a stone quarry background locates them deep beneath the earth in a virtual object study. The bells, implying workday flows and organisation, are stripped of their physicality in a move towards the conceptual in-betweens of objects and their digital shadows. They playfully, almost hauntingly counteract Swiss rationality, refusing to function in their uncanny virtuality.

These ambiguous forms define certain legacies in Swiss art, and can be seen throughout the works in the exhibition that each counteract and complement one another through the decades. The ideas of Dada and Surrealism continue on, from dream worlds to digital worlds, through the everyday absurdities of reality; ‘Spiegelgasse (Mirror Alley)’ thus not only refers to how one might conceive of art histories, but also the refractions of the everyday that encourage us to confront our own perceptions.

Gianni Jetzer is an independent curator and writer based in New York.
www.hauserwirth.com