Thomas Houseago - I'll be your sister 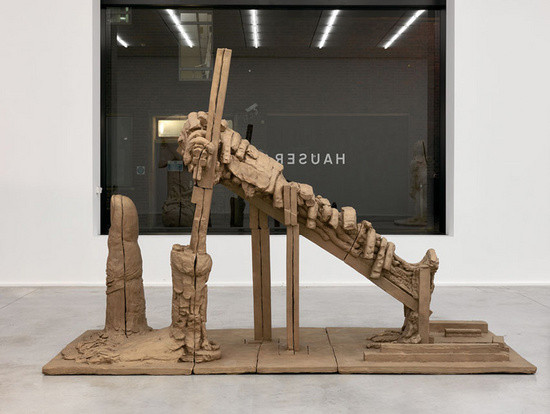 Thomas Houseago is a sculptor of contradiction. Using a highly evolved artistic language, he creates works which are mysterious and unworldly, yet brutally straightforward. Their seemingly unfinished surfaces are rough, yet sophisticated and, through the artist’s graphite sketches on the plaster, they combine the three-dimensionality of sculpture with the two-dimensionality of drawing. For his debut with the gallery, Houseago will present two exhibitions, filling both spaces of Hauser & Wirth, Savile Row with new, monumental figures, relief wall panels and abstract, columnar lamps. Working in traditional, low-grade materials such as plaster, hemp, graphite and iron rebar before casting in bronze, these works emphasise the performative act of sculpture.

At over three metres tall, Houseago’s unique lamp works tower above the viewer. Set atop pedestals, these quasi-figurative, geometric forms are punctured with eye socket-like holes through which a white light shines. They are equal parts menacing and welcoming, beckoning the viewer to enter the gallery with their eerie and ethereal glow.

Houseago strives to impart a sense of energy and animism to his figures. Whether standing with feet spread wide, striding forward, or lying supine on the gallery floor, despite their hollow gaze and empty interior, these sculptures are infused with a sense of urgency and dynamism. Houseago fully embraces the process of sculpting by leaving visible the structural components. The iron rebar which forms the figures’ skeleton weaves in and out of its plaster skin. The artist’s movements as he shaped and carved the work remain as handprints, strokes and gashes on the sculpture’s surface.

Houseago’s wall panels are filled with depictions of arms, hands, feet, fingers, and mask-like faces, moving beyond his earlier abstract reliefs. Like his figures, weighty smears of bronze build up form, lending volume to the otherwise disembodied faces and limbs, which, despite their fragmentation, seem to press into the panel and bend as if preparing to leap onto the ground.

Houseago’s practice further pushes the boundaries of contemporary sculpture, yet he often looks back to art history. In the case of his wall panels, he references the composition of the meticulously detailed anatomical drawings of the Renaissance. However, unlike his Humanist forebears, Houseago’s panels are unrefined and fractured to the point of deconstruction.

Concurrent with his exhibitions in London, Houseago will also present an exhibition of new works at Hauser & Wirth Zürich, entitled ‘Plants, flowers & faces’, which will be on view from 1 September to 20 October 2012.
www.hauserwirth.com