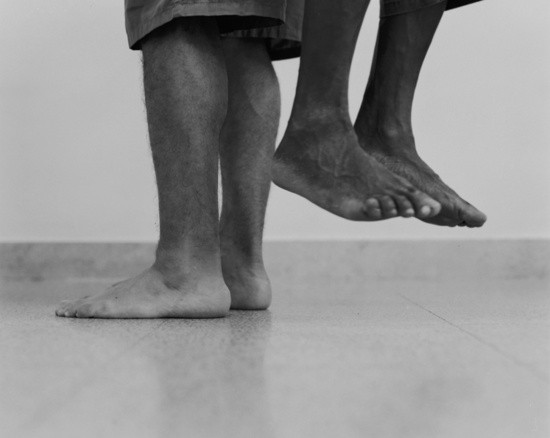 New York, NY... Personal identity, like musical composition or the natural world around us, is not a static entity but a fluid enterprise, dependent upon deviations and constantly emerging. Working the puzzle of identity – toying with its seemingly disparate fragments and finding among them a mysterious but coherent language – is the occupation of Peru-born, Berlin-based artist David Zink Yi. In his expressive and magical art, Zink Yi conducts explorations into questions of identity and sends back dispatches from a realm that lies between reality and fiction.

The exhibition at Hauser & Wirth takes its name from the 16-millimeter short film ‘Pneuma,’ which features Cuban trumpeter Yuliesky Gonzalez Guerra, a member of De Adentro y Afuera, Zink Yi’s Cuban band. In a single take, Guerra is seen walking from the blurry background directly toward the camera until his face fills the frame in perfect focus. Taking three deep breaths, he places the trumpet in front of his face, disappearing behind its bell. The trumpet’s golden funnel replaces the musician’s features for about 40 seconds while he holds a single high C. The film lasts as long as Guerra can hold the note and ends abruptly at the moment he stops from exhaustion, lowers his instrument, and gasps for air.

The word pneuma comes from the Greek language and means ‘spirit,’ ‘breath,’ and ‘air.’ But it also means ‘breath as the place where the soul and the force of life reside.’ Shown in a continuous loop, Zink Yi’s film can be understood as a meditation upon the cycle of life and death: a musical note lives for the duration of one breath and dies with the vital act of inhaling that, in turn, is necessary for the note’s rebirth. Described by the artist as a ‘possessive medium,’ sound acquires a distinct identity in ‘Pneuma.’ Installed in the most distant of the gallery’s ground floor rooms, the film’s high C pierces physical space, compelling visitors to walk toward its source. At the same time, ‘Pneuma’ pierces psychological space with a challenge to negotiate between our awareness of the universal – the unconfined sound of a high C, achieved by releasing all fingers from the trumpet’s valves – and our inevitable tethers to the specific, embodied by the vivid countenance of the musician who stares out at us and whose life force generates our shared experience.

At the center of the Hauser & Wirth exhibition is the room-filling ‘Untitled (Architeuthis),’ a massive sculpture of the ancient sea squid that since pre-historic times has dwelt at the ocean’s darkest depths. The subject of lore and fine art for centuries, the Architeuthis emerges to human view only at its death, when it washes onto shore and is deposited at the border where the opposing but interdependent worlds of land and sea meet. Zink Yi’s dying squid sprawls across the gallery floor, a body without breath. Its 16-foot, deflated, creamy pale form rests in a pool of glistening dark liquid, provoking the viewer into a powerful encounter with the unfamiliar. Intended less as narration than as a pedestal or frame for the work, this liquid brings the viewer back to awareness of the alchemy involved in its making. Looking like tons of dead animal protein, Zink Yi’s Architeuthis is in fact a 660-pound ceramic object achieved through a tremendously difficult process that pushes the material to the very limits of its potential. Through a literal and figurative trial by fire at more than 1200 degrees centigrade, Zink Yi thus fixes a body at the border of two other opposing but interdependent worlds: the realms of grotesque and the precious.

Adjacent to the Architeuthis, visitors will see a large nocturnal photograph showing part of a grand cedar, a tree that signifies immortality in many different cultures. Together these two works create an imagescape that oscillates between abstract motif and suggestive metaphor, in a study of form and aesthetics, material and transformation. Both works play formally and metaphorically with the dimension of movement from the depths into the light and up to the surface.

Four photographs by Zink Yi, including one lit through the gallery’s main street window, will occupy Hauser & Wirth’s front room and complete the first floor of ‘Pneuma’.

The gallery’s second floor will be devoted to a single major work, ‘Alrededor del dosel (Around the Canopy),’ an installation first presented by the artist to acclaim in 2004 and recreated for ‘Pneuma.’ Encompassing a two-channel video projection on wall and floor, ‘Alrededor del dosel’ takes visitors on an expedition through the Peruvian jungle in search of a rare bird. One camera is trained at ground level, tracking two pairs of feet through dense foliage; the first belongs to an ornithologist and the other, tracing the scientist’s footsteps, belongs to the artist himself. The gallery is filled with the sound of a conversation in Spanish, in which the ornithologist speaks about the elusive bird while the artist serves as his audience and student. Another camera pans up the trunk of a great tree toward the leafy canopy where dense growth emerges into light, taking in the details of nature as it goes. The scientist’s commentary – translated into printed text that runs around the gallery walls at eye level – oscillates between the matter of fact (his simple, accurate description) and the poetic (his metaphors and anecdotes). The rare bird that is the object of the search is never found, but its presence is felt, shaping the conversation and directing the action in much the same way the human unconscious shapes waking life from its home at depths of mind and soul. In ‘Alrededor del dosel,’ the search itself, and the parallel reality deftly crafted through the form and narrative of this deceptively simple work, suggest access to a deeper reality.

Together, the seven works on view in ‘Pneuma’ explore the limits between outward and inward experience, the territory between where factual history and personal feeling touch. The exhibition implies that this territory requires a bit of time to locate and experience. Only through the passage of time – through literal and proverbial ‘deep breaths’ – does the web of connections and disconnections reveal itself fully.

David Zink Yi was born in Lima, Peru in 1971. He studied at Berufsfachschule, Munich; Kunst Akademie, Munich; and the Universität der Künste, Berlin. He lives and works in Berlin.

His art has received attention for its unique approach to the problematic fields of identity, origin, and social roles, and for a critical engagement with culturally and emotionally determined actions and experiences. These actions, such as cooking, speaking, dancing, singing, writing and narrating, which sketch the complexity of identity, identity-formation and their forms of expression, are most often the performative stimulus for making the works.

Over the past decade, the artist has been using natural forms, ritual, music and dance to explore the complex motifs as constructed within cultural traditions. As a medium of expression, the body is always present in the works. It is the place at which the limits between outward and inward experience, between factual history and personal feeling are drawn.