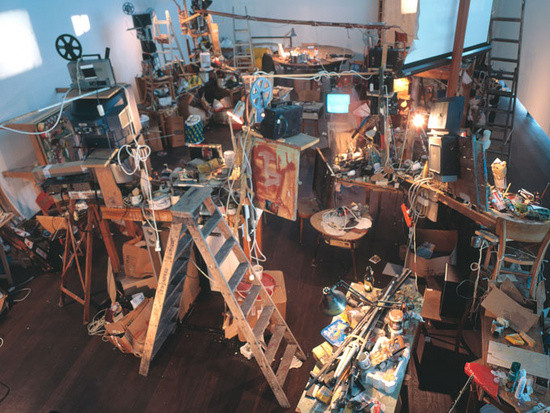 New York NY... Sculptor, painter, printmaker, collagist, poet, diarist, graphic designer, publisher, filmmaker and musician, German-born Swiss artist Dieter Roth (1930 – 1998) has been described as ‘a performance artist in all the mediums he touched’. Everything Roth made involved acting out a central concept of art and life as utterly indivisible – a single enterprise in which material stuff is subservient to the emotional and sensual experience for which it stands. Roth was not an artist who tolerated boundaries. In seeking to pulverize them, he elevated the processes by which things happen, embracing accidents, mutations, and accretions of detail over time; inviting nature to have its way with unstable mediums, including fruit, chocolate, and sugar; and perhaps most boldly, inviting the dilution of his own authorship through constant, intensive collaboration with other artists. Those partners included such significant figures as Richard Hamilton, Emmett Williams, Arnulf Rainer, and Hermann Nitsch. But it was Roth’s long and symbiotic collaboration with his own son, artist Björn Roth, that stands as testament to the enormous and enduring potency of his restless, relentless process.

On 23 January 2013, Hauser & Wirth New York will open ‘Dieter Roth. Björn Roth’, a landmark exhibition of masterworks that highlights this remarkable twenty-year collaboration and, through it, the diversity of the practice that has established Dieter Roth as one of the most inventive and influential artists of the second half of the 20th century. ‘Dieter Roth. Björn Roth’ culminates Hauser & Wirth’s 20th anniversary and inaugurates the opening of the gallery’s new, second exhibition space in New York City, at 511 West 18th Street, between Tenth and Eleventh Avenues. Moreover, the exhibition sets the stage for major exhibitions to be presented at 18th Street in 2013 by three artists – Paul McCarthy, Roni Horn and Matthew Day Jackson – who claim Roth as their touchstone.

Organized with the cooperation of the Dieter Roth Foundation, Hamburg, Germany, ‘Dieter Roth. Björn Roth’ presents more than 100 objects created since the 1970s, including numerous works never before exhibited in the United States. Among these will be ‘The Floor I (Studio-floor from Mosfellsbaer, Iceland)’ from 1973 to 1992; a series of wall-mounted works form the 1980s comprised of such at-hand materials as toys, sweets, tools, refuse, and dead insects in plastic tubes; and key works from the ‘Tischtücher’ series of paintings made in the late 1980s and early 1990s from used tablecloths. Key examples of Dieter Roth’s poignant ‘Kleiderbilder’ paintings, made from the artist’s own clothes, also will be on view, as will the installation ‘Grosse Tischruine (Large Table Ruin)’, created by Dieter and Björn Roth with Eggert Einarsson between 1978 and 1998.

The exhibition will also present three major series of prints that spotlight Dieter Roth’s stunning mastery over and subversion of the printmaking process, drawing in fugitive materials whose ongoing deterioration gorgeously alter the final work over time.

‘Dieter Roth. Björn Roth’ revisits a major project shown previously in New York in 2004 at P.S. 1: ‘Solo Szenen (Solo Scenes)’, created by Dieter Roth in his final year (1997 – 1998), is the artist’s attempt at illustrating life as the accumulation of vast quantities of fragments of data. For this work, which has been described as ‘a Rembrandt self-portrait re-imagined as a video diary’, the ailing Roth traced his own trajectory through days and places by setting up cameras in his studios in Germany, Switzerland and Iceland, and filming himself going about daily activities that ranged from sketching and filing, to watering plants, slumbering, and reading on the toilet. While the resulting 128 videotapes of ‘Solo Scenes’ comprise a powerful elegiac finale to Dieter Roth’s mortal run, the humility and simplicity of their content imbues the total work with a sense of time suspended.

Perhaps most significantly, ‘Dieter Roth. Björn Roth’ extends the performative impulse at the heart of the Roth oeuvre into the present moment, illustrating Dieter Roth’s fundamental principle that art both defines and lies beyond the limits of time: Working on site for a month before and through the opening of the exhibition, Björn Roth, assisted by his sons Oddur and Einar, will construct the latest iterations of several pivotal installations originally conceived by Roth père as never-ending projects – masterpieces ceaselessly in the making. For ‘Shokoladeturm (Chocolate Tower)’ and ‘Zuckerturm (Sugar Tower)’, the Roths will build at Hauser & Wirth their own version of the original Dieter Roth sugar kitchen, that resides at the Dieter Roth Foundation’s Schimmelmuseum in Germany. With their new kitchen, the trio will cast chocolate and sugar elements – the four basic mold forms are the ‘Selbstportrait (Self-portait)’, the ‘Löwenselbst (Lion-self)’, the ‘Sphinx’, and the ‘Portraitbüste mit Löwenkopf (Self-portrait with lion head)’ – and stack them into evolving structures. The Roths’ first Sugar Tower collapsed in 1994; in the year preceding his death, Dieter Roth advised Björn to rebuild it in the future using the broken busts of the old tower.

Continuing another longstanding and on-going project of the Roths’ cross-generational practice, Björn and Oddur Roth will also create ‘Roth New York Bar’, a fully functioning, site-specific liquor and coffee bar for the exhibition. This bar will remain permanently at the new Hauser & Wirth space at 18th Street.
www.hauserwirth.com