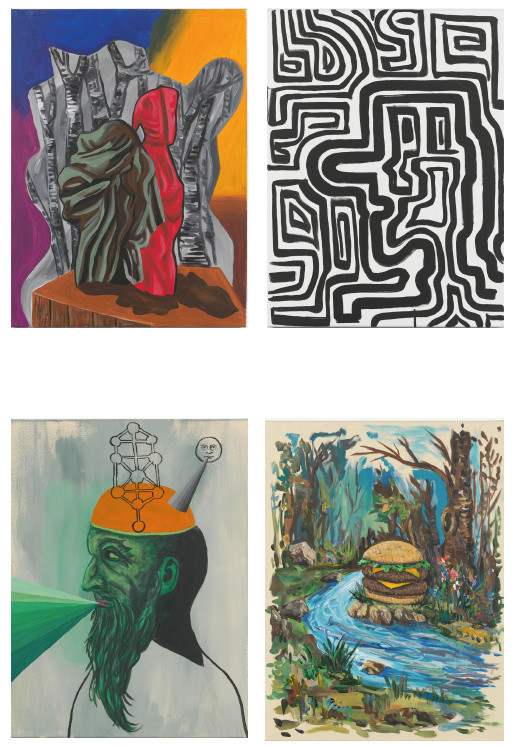 Based in London since the mid-1990s, Ozbolt is a voracious traveller and exoticist whose work wistfully ransacks cultures, traditions, curiosities, and epochs. Collapsing the narratives of his paintings and sculptures into solitary images, Ozbolt creates mysterious and often macabre imagery that persistently conflates traditional European genres – of portraiture, still life, landscape, and history painting – with motifs sourced from Christianity, African and Asian art, and cultural stereotypes, all overlaid with the artist’s signature sharp wit.

Comprised of a series of new paintings, sculptures, and drawings, ‘More paintings about poets and food’ will remain on view at Hauser & Wirth’s uptown gallery through 21 February 2015.

Central to the exhibition is Ozbolt’s new work ’50 ways to leave your lover’ (2014), a major installation – and the largest work created by the artist to date – of 50 paintings presented in a continuous horizon line on the gallery’s second floor, where viewers are invited to follow a path through the artist’s rambunctious imagination. In the middle of the space is a custom-built trolley designed to hold and transport all 50 paintings. Assembled from found wood and scrap material, this cart functions both as quasi-Modernist sculpture and a portable repository for the artist’s work. The subjects of paintings in ’50 ways to leave your lover’ (which takes its title from Paul Simon’s 1975 hit song of the same name) derive from pop culture and politics, and the history of art and abstraction. Some are painted in bold, bright colours, while others are rendered in mute monochromatic hues. Offering up images from found and fantasy scenes, the paintings reveal a glimpse into the random effusions of Ozbolt’s subconscious, teetering between, and often spilling into, the theatre of the absurd. This series of 50 works was painted within a three-month period and can be read diaristically as a sketchbook of the artist’s moods and associations at a particular moment in time. Flitting between solid, geometric block painting and scratchy, gestural markmaking, ’50 ways to leave your lover’ playfully illustrates Ozbolt’s droll humour and mastery of paint.

Also on view is ‘Releasing the Demons of Creativity’ (2014), a new painting that may be read as a self-portrait. Here the artist is depicted in a primitive state, pensively attempting to create something beautiful to release into the world. The creative process is again explored in Ozbolt’s ‘Poet smoking’ (2014), where the artist – shown as a bundle of colourful nerves nearly bursting with energy – smokes with bulbous eyes and near-exposed flesh, awaiting inspiration.

The exhibition also includes several new sculptures. Among them is ‘Really Big Mac’ (2014), a sickly pink cast resin work that seems to sound an alarm against gluttony and excess. ‘Let Her Eat Paint’ (2014) is constructed from a found bust of Marie Antoinette that has been covered in paint remnants from Ozbolt’s studio: a humorous reimagining of the punishment that artists would have dealt the infamous queen.

‘More paintings about poets and food’ also presents a group of new drawings that depict exotic settings populated by surreal creatures or hybrid portraits of stereotypical symbols of Americana. These witty works reveal the role that stream of consciousness and free association play in Ozbolt’s work. As such, they suggest a kind of codex to his studio practice and the other works on view in the exhibition.

Djordje Ozbolt was born in Belgrade in 1967. He studied architecture at Belgrade University and moved to London in 1991, where he continued his studies in painting at the Royal Academy. Ozbolt lives and works in London. Recent solo exhibitions include ‘Mens sana in corpore sano’, Herald St., London, England (2014); ‘Who Say Jah No Dread’, Hauser & Wirth Zürich (2013); ‘Tell them I said something...’, Hauser & Wirth Zürich (2010). Ozbolt has been featured in numerous group exhibitions including ‘Beasts of England, Beasts of Ireland’, Visual Carlow, Carlow, Ireland (2014); ‘The Allure of the Collection’, The National Museum of Art, Osaka, Japan (2012); ‘Figure Studies’, Contemporary Art Museum, St. Louis MO; the Prague Biennale, Prague, Czech Republic (2007); and ‘Tate Triennale’, Tate Britain, London, England (2006).

In Spring 2014 JRP Ringier published a catalogue devoted to the artist’s work.
www.hauserwirth.com