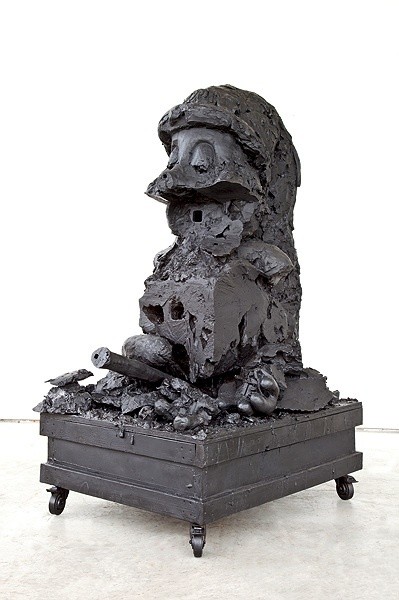 New York, NY... Hauser & Wirth New York is proud to present an exhibition of major new works by Los Angeles-based Paul McCarthy, one of America’s most challenging and influential artists. Comprising bronzes, a massive tour de force wood carving, and a pair of fantastical landscape maquettes all presented on the gallery’s two floors, ‘The Dwarves, The Forests’ is the first exhibition of sculptures to emerge from McCarthy’s recent exploration of the famous 19th century German folk tale Snow White (Schneewittchen) and the modern interpretation of that story in Disney’s beloved 1937 animated classic film ‘Snow White and the Seven Dwarfs’.

Opening on November 7, 2011, ‘The Dwarves, The Forests’ is part of a landmark transatlantic survey of McCarthy’s recent work, presented by Hauser & Wirth in all of the gallery’s New York and London spaces simultaneously. In London, the exhibition – titled ‘The King, The Island, The Train, The House, The Ship’ – opens to the public on November 16th and includes important sculptures and installations never before exhibited in the United Kingdom. McCarthy’s work will remain on view in New York until December 17, 2011 and in London until January 14, 2012.

In the 2009 New York exhibition ‘WHITE SNOW’, Paul McCarthy unveiled his first drawings related to the Snow White theme. With their antecedents in the artist’s now famous Heidi and Pinocchio series, these drawings – a group of intimate graphite images and a suite of enormous, fiercely gestural and unstintingly funny collaged works on paper created through a performative process – shifted a familiar European narrative back to the New World. McCarthy’s version of Snow White drew upon both the dark psychological and social undercurrents of the original 19th century tale, and its unstintingly commercialized 20th century version, familiar through books and a vast array of licensed tchotchkes. Amalgamating these with personal memories and impressions of the deep forests and magical clearings on his own property above the Mojave Desert, the artist opened, perhaps more widely than ever before, a window onto the deeper regions of his artistic discipline and psyche.

Two years later, ‘The Dwarves, The Forests’ at Hauser & Wirth New York presents the next steps in McCarthy’s ongoing, multi-platform mining of the Snow White vein in the form of sculptures and installation derived from the earlier drawings and the performative ethos that generated them. At the gallery on East 69th Street, visitors will encounter a series of deep black figures and heads – the dwarves with eyes gouged, noses dangling like flaccid phalluses, and bodies disfigured and hobbled. These grotesque transformations of fairytale characters are neither adorable nor obscene, but instead elicit stabs of pathos. The rages of effort that produced them are visible in their forms and surfaces, marking vividly the passage of time; their pedestals are strewn with the junk that accumulated during their creation, memorialized in bronze. Unified by a mournful charcoal-like finish, these works reflect McCarthy’s fascination with the aggression and visceral messiness of sculptural process – cracks and lumps and slop – as an analogue for physical violence and decay. Their dark sheen calls to mind the black coal of dank mines. For McCarthy, this black suggests Kazimir Malevich, Ad Reinhardt, Alberto Burri and others who struggled to break through to pure abstraction.

For McCarthy, the path from initial sculpting – building and then ‘fucking up’ the original by grabbing, erasing, adding to, and squeezing it, and scattering evidence of the process around it – to mold making and, finally, casting, is a journey through successive levels of abstraction. ‘Casting,’ he says, ‘liberates the literal through a kind of unifying monotone, a different representation of the original thing that lets me explore where reality and abstraction intersect.’

In a light-bathed space at the rear of Hauser & Wirth’s ground floor, visitors will come upon ‘White Snow and Dopey Wood,’ a soaring carved walnut figure group and the first monumental sculpture ever executed by McCarthy in wood. Here, an avatar of innocence familiar from a million cheap collectible figurines is reborn as a massive sexualized saint. The extraordinary detail of this carving, along with the sculpture’s expressionistic posture and ecstatic facial expression are reminiscent of Italian Baroque masterworks – in particular, Gian Lorenzo Bernini’s swooning ‘Transverberation of Saint Teresa’ – and the bravura mannerism of German artist Tilman Riemenschneider’s late limewood figures. McCarthy’s female avatar falls into line with the rest of his work, in which ironic and subversive reinterpretation of established styles and preferred materials have always played parts. But with its warm and gleaming walnut, ‘White Snow and Dopey Wood’ moves into a new realm of abstraction, playing with the ways in which the grain, irregularities and color variations of the walnut attack the limits of narrative with compositions of their own. The piece appears at first glance to be a meditation upon bodily seduction and female power, but this layer of meaning is only an avenue to another kind of experience. In spite of its pictorial character, McCarthy’s consumer saint is intent upon helping the viewer explore realms between various degrees of reality and abstraction.

‘The Dwarves, The Forests’ also presents a pair of large maquettes of magical landscapes on studio tables, executed in clay, foam, wire, plaster and gauze. Called ‘White Snow Dwarf Log, Male’ and ‘White Snow Loving Forest, Female’ these sculptures are models of sets for future performances and films McCarthy is now planning. As their names imply, these landscapes – fantasias that morph the real landscape of McCarthy’s own wilderness property with visions of fairytale forests – are anthropomorphized and given the attributes of male and female bodies.

While distinct in surface and sense of weight, all of the works in ‘The Dwarves, The Forests’ achieve an air of the classical. McCarthy’s materials – bronze and fine walnut – suggest, in their luxe and permanence, that the artist embraces the significance his characters enjoy as enduring cultural totems serving a deeper need for emotional and psychological escape.

Born in 1945 in Salt Lake City, Utah, Paul McCarthy is admired internationally. He is known for challenging, visceral work in a variety of mediums – from performance, photography, video and installation, to sculpture, drawing and painting – and scales ranging from tiny to monumental. Playing on popular illusions, delusions and cultural myths, his work has often incorporated obsessive activities and challenged expected physical orientation. Absent or present, the human figure has been a constant in his work, whether through the artist’s own performances or the army of characters he has created to deliberately confuse codes, mix high and low culture, and provoke an analysis of our fundamental beliefs.
www.hauserwirth.com